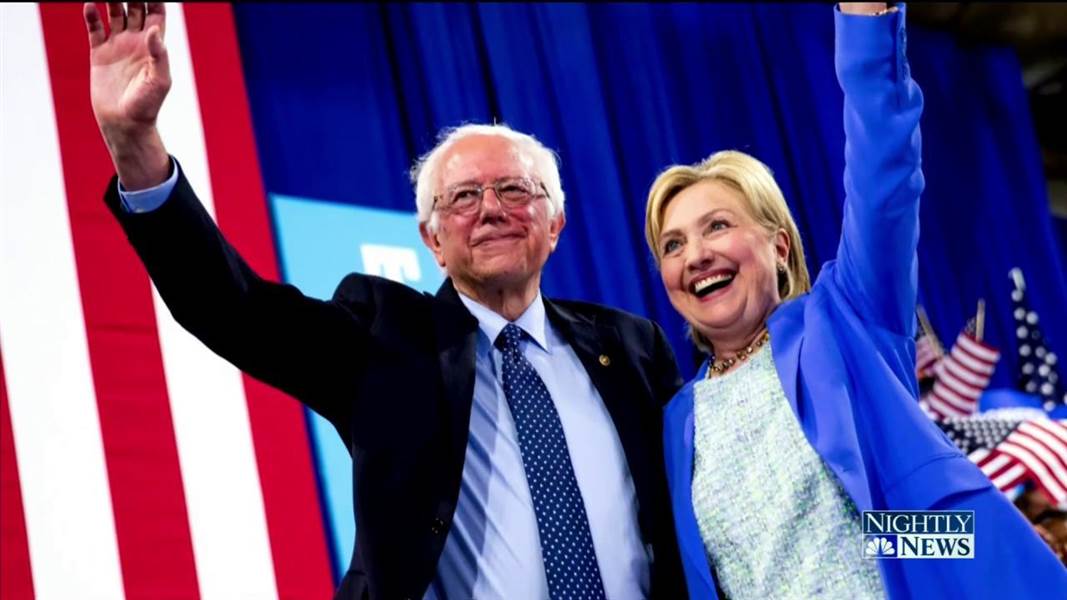 Bernie Sanders’s endorsement of Hillary Clinton has hugely disappointed millions of his supporters. Many of those inspired by his call for a political revolution had held out hope, even until now, that he would refuse to endorse Wall Street’s favored candidate.

But those hopes have come crashing down.

Not only did Sanders endorse his neoliberal opponent, he has begun to campaign for her, even before the Democratic National Convention, where he had previously committed to continue the fight. Appearing at her rally in New Hampshire, he signaled his intention to further accompany her on the campaign trail.

Bernie’s forceful endorsement of Hillary was almost glowing, after months of campaigning against her close links to Wall Street and Corporate America. He said: “Hillary Clinton will make an outstanding president and I am proud to stand with her here today.” The heart of his speech was an issue-by-issue comparison of the two corporate candidates. He outlined the real dangers of Trump’s politics, saying for example that Trump’s approach to climate change, “would be a disaster for our country and our planet.”

There can be no doubt about Bernie’s diagnosis of the threat represented by Trump’s right-wing populism, but he is entirely wrong about how to cure the disease. We will not succeed in decisively defeating the right by supporting establishment politicians like Hillary Clinton. It is the massive outrage at the brutal big business policies carried out by the political establishment, of which Hillary is correctly seen as a chief representative, that has created the basis for Trump’s ascendance. We saw this very clearly only a few years ago with the rise of the Tea Party, which was born out of the fury at the Wall Street bailouts, while the left was busy making excuses for Obama’s pro-corporate policies.

The (un)Democratic Party will never be an effective tool to defeat the right wing, either during or after the election. Experience has shown repeatedly that it is, in fact, a longtime enabler of it. In order to defeat the right, we will need to build powerful, united mass movements and a new political party for the 99% – that will work alongside our movements, rather than against them.

Hillary Clinton has the dubious distinction of being the second most unpopular major party nominee in the history of U.S. presidential polling, second only to Donald Trump. Fear of Trump is the main support propping up Clinton, while fear of Clinton is the main prop for Trump.

The strategy of lesser evilism has been an utter disaster for the 99%. Effectively unchallenged by the left, the Democratic Party helped the Republican Party to push the agenda steadily to the right over the past decades. As Green Party presidential candidate Jill Stein has aptly put it, “the politics of fear has delivered everything we were afraid of.”

Bernie’s campaign has shaken the foundations of U.S. politics with its bold challenge to the corrupt political establishment and the domination of Wall Street and the super rich over society. Tens of thousands of people became politically active for the first time, and a broader discussion about socialism has been put back on the agenda. But the issues Sanders ran on, like a national $15 minimum wage, opposition to the Trans Pacific Partnership (TPP), and Medicare for all, will in no way be advanced by his capitulation to Clinton.

Instead, Bernie’s endorsement will be used in an attempt to prop up that same rotten establishment, including the corporate-owned leadership of the Democratic Party which has fought against him at every step, and which just booed him in the last week. Further, if Jill Stein were not running, or received little support, polls already show that the two right-wing candidates, Libertarian Gary Johnson, and Republican Donald Trump, would be the beneficiaries of the anti-establishment vote – helping to grow the base for right-wing populism.

Sanders endorsement of Clinton is a fundamental failure of leadership. Sanders has the trust of millions of the most dedicated, committed workers and young people. They are looking to him. He has a responsibility to lead them in the way forward, not into a political dead end.

While my organization, Socialist Alternative, and I actively supported Sanders’s campaign by launching Movement4Bernie, we always openly disagreed with his decision to run in the Democratic Party primary. But we also said that this mistake could be corrected as experience clarified the deeply hostile character of the Democratic Party to progressive politics. We urged Bernie if he was defeated within the (un)Democratic primary, as we expected, to continue running as an independent or Green, and launched a petition that has been signed now by nearly 125,000 people.

The experience of the rigged primary utterly exposed the undemocratic, conservative, and pro-corporate character of the party. While Sanders won roughly 46% of the Democratic primary vote, he only received the endorsement of eight Democratic members of the House and only one Democratic Senator. The vast majority of the party establishment stood firmly against Sanders and the millions of workers and youth mobilizing behind his call for a political revolution against the billionaire class.

The whole experience of the Sanders campaign and the massive gulf between the enormous grassroots upsurge of working people and youth behind Sanders, and the conservative, pro-capitalist character of the Democratic Party, graphically highlighted the potential to begin building a new political party, independent of corporate interests and billionaires.

Even if Sanders was not prepared to take such a step, there was nothing that compelled him to endorse Hillary Clinton, a candidate of Wal-Mart, Wall Street, and warmongering. Sanders could have at least refused to endorse Clinton and reached out to his millions of supporters to mobilize them for mass protests against the racism and misogyny of Donald Trump, while urging them to vote for the left-wing, anti-corporate campaign of Jill Stein.

Such a step would have been in tune with a big section of Sanders’s base. In recent polls, nearly half of his supporters were still rejecting calls to vote for Clinton, in spite of enormous pressures from the entire political and media establishment. But instead of correcting his initial mistake of running within the Democratic primary, Bernie is doubling down on it. His left wing credentials will now cynically be used in an attempt to corral Sandernistas back behind the very establishment that they are revolting against.

Bernie’s case for endorsing Clinton was framed around the concessions in the Democratic Party platform passed in Orlando. To have any meaning, the platform would need to be binding on elected officials of the party. Politicians who vote against the Party platform would need to know they will lose future party backing. Of course that is not how the Democratic (or Republican) parties work at all. In reality, the history of DNC platforms has been a long, almost unblemished record of vague and broken promises. The platform normally goes out the window even before the ink is dry at the convention. Hillary Clinton will be free to pick and chose what policies she implements once in office regardless of what the platform says, and her decisions will be heavily guided by what is acceptable to her billionaire backers.

While there were certain platform concessions made under pressure by the Democratic establishment, even those have been limited. Clear positions on major issues seen as hostile by corporate America – such as Medicare for all, opposition to the TPP, or a rejection of fracking – have been blocked. And while a $15 minimum wage was approved, does anyone seriously believe Clinton will fight for it? Just look at her donors: Wall Street banks, McDonalds, WalMart, Target, Big Pharma, HMOs and Big Oil. Will any of them tolerate a doubling of the national minimum wage?

Bernie has stated, many times, that “The Democratic Party has to reach a fundamental conclusion: Are we on the side of working people or big-money interests?” Can Bernie say with a straight face that the Democratic Party (or Hillary Clinton herself) has now, in any way, reached that conclusion?

We can’t afford to follow Bernie’s error. It is time for us to move on.

Because, make no mistake, we do need to defeat the right.

We will stop the growth of right populism the same way we will win the demands we fought for over these last months. By building the organized, fighting capacity of working people into powerful mass movements. Demobilizing our movement and handing over our fate to corporate politicians will only embolden the right.

The key reason broader social programs that were won in Europe and elsewhere (as Bernie so often refers to) were never established here is primarily because the U.S. working class has not yet succeeded in building its own political party and has instead remained tied to the pro-capitalist Democratic Party. Countries like Sweden, Britain and France did build mass socialist and labor parties which stood against the liberal and conservative capitalist parties in their countries. They fought alongside powerful movements and won important gains such as socialized medicine and free college education. The ruling elites in those countries conceded these public programs purely to stave off the threat of even greater upheavals by the working class, not out of goodwill.

We have an historic opportunity now to begin building toward a new mass party of the 99%. We need a party based on genuine democracy, with an elected and recallable leadership, that accepts no corporate donations, that has a binding platform, and that is fully prepared to “welcome the contempt” of Wall Street and Corporate America, while fighting unapologetically for our interests.

That is why I’m endorsing Green Party candidate Jill Stein.

Jill Stein is fighting on essentially all the same issues as Sanders. She’s calling for Medicare for all, a $15 minimum wage nationally, a rapid transition to renewable energy, and an end to mass incarceration. In some ways she has gone further than Bernie, in particular with her rejection of key aspects of US foreign policy and her call to cancel student debt.

There can be no doubt that Jill’s campaign is the clear continuation of our political revolution, and deserves the broadest possible support from Sandernistas. The stronger the vote for Jill Stein the better positioned we will be to begin laying the basis for a new party of the 99% in the period following the 2016 election.

While I don’t agree with Jill or the Green Party about everything, the Greens have an important role to play in helping to build independent politics. It’s time to be clear about what “Bernie or Bust” means. Now is not the time to throw in our cards and go “bust.” Bernie’s capitulation is a real setback. But we don’t have to accept it, we have real work to do and millions of people are looking for a way forward.

Later this week, Movement4Bernie will be relaunching itself as Movement for the 99%, in reflection of its ongoing commitment to fight for the political revolution, before and after November. If you haven’t yet, I would invite you to attend a Beyond Bernie meeting in your area, hosted by Movement4Bernie and Socialist Alternative, to discuss the next steps for our movement and to get involved. I hope you will attend and consider joining Socialist Alternative.

In just two weeks time, we will be at the Democratic National Convention. There will be major protests and rallies outside the DNC on the streets of Philadelphia. Inside, Bernie delegates will also be protesting against the Democratic leadership, and some are actively organizing a walkout.

I hope you can be there with me to protest and to greet the delegates who take the bold step of walking out of the DNC.

But it’s also time for an even bigger walkout – a mass walkout from the stranglehold of corporate politics and the (un)Democratic Party. It’s time to build our own party and a real revolution – one powerful enough to challenge corporate domination, institutional racism, poverty, and economic inequality – to win all the things our movement has been fighting for.