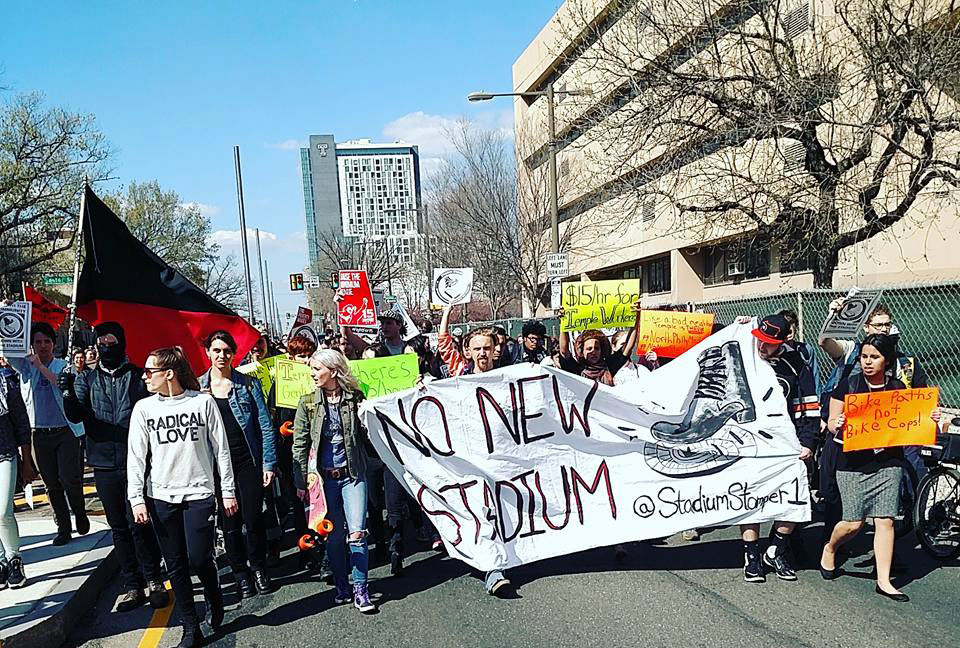 Temple University has humble origins: it grew out of night school classes held in the basement of a Baptist Church. Today its main campus houses 12,000 students on 105 acres in North Philadelphia. It receives public funding but is operated by an independent board of trustees. Like most universities, it relies on tuition to fund a much larger portion of its budget than in the past. Deep education budget cuts consequent to the 2007/08 recession accelerated this process. Temple has been aggressively shedding its traditional role as a largely working class commuter school to become more expensive, more elite university attracting students from a wider radius, beyond the city of Philadelphia and its immediate suburbs. Fewer and fewer employees’ children and students from the neighborhood are able to make the cut. Temple has contracted out previously unionized jobs in food service, security and housekeeping to non-union, low paid private firms, whose employees do not quality for tuition benefits. Also like many of its rivals, the University has shifted to an increasingly adjunct faculty. Thus, the well established “social compact” with the neighborhood has frayed to the breaking point.

15 Now established a club at Temple and began advocating for increasing the minimum wage to $15 an hour for all workers on the University’s footprint, regardless of employment status—contractor, subcontractor, student, part-time or adjunct faculty. Then last semester, the administration announced plans to build a new football stadium on campus and we built Stadium Stompers. Watch a video about this struggle here.

Socialist Alternative: Why has Philly 15 Now decided to focus its campaign on Temple’s North Philadelphia campus?

Zoë: Pennsylvania’s minimum wage is still $7.25, or $2.83 for tipped workers and Philadelphia is the poorest big city in the U.S. Despite the support that 15 has in Philadelphia, the state’s pre-emption law prevents Philadelphia from raising its minimum wage without state approval. There were concerns from the unions and politicians involved in the 15 campaign that to go forward at the city level would result in legal action by the state. Temple is largest public employer in Philadelphia. By focusing on Temple, and winning $15 at a specific institution, 15 Now can have a huge impact on the city, creating pressure on other employers.

SA: So you had an active organizing campaign for 15 on campus when the University administration announced plans to build a $126 million, 40,000 seat foot ball stadium?

Anna: We had been fighting to raise wages at Temple for over a year and while the University administration had been officially ignoring us. It was sending a clear message that there was no money for wages and trying to

So we called a public meeting in a local church where we knew the pastor. We did some outreach in the community and to students, but not that much, and 100 people showed up! About 60 of those were community members. This was really significant because it was the first time people could remember students and community members working together on something in common. Out of that meeting, we created Stadium Stompers.

SA: What actions did Stadium Stompers take to influence the decisions of the University?

Zoë: We started by targeting the Board of Trustees.

Students and community members tried to attend the meetings of the Board to voice our concerns. The administration had about 50-75 police officers meet us outside their “public” meeting. They claimed there was a capacity issue and only five people could go in. So five people, including myself, went in and saw the capacity issue was a complete lie, there was plenty of room. Inside, we stood up and tried to address President Theobald and the Trustees. They basically turned their backs and ignored us. So we learned that we needed to organize, to engage more students, more faculty and more workers and community members, and escalate.

SA: What do people living near the proposed stadium site say motivates them to be involved?

Zoë: Temple has not released a definite plan for the site, only a general location. One major concern is the rec center where kids go for after school programs with a swimming pool and a playground all in that area. The proposed site is either right next to or on top of a track that is accessible to community members at this point. Either way, kids are still going to see a lot of drunk college students coming out of football games, potentially more drunk driving and those are extreme concerns. People express concerns about light pollution, trash, noise, and assaults. Another big one is parking. Parking is already an issue in the neighborhood, people can’t park anywhere near where they live. And there’s no plan for parking, yet. Then there’s the trauma of walking out your door and seeing this giant 10-story megaproject instead of the Philadelphia skyline every day.

Anna: There are also concerns related to further gentrification in the neighborhood. Rents have really skyrocketed in this part of the city recently. Like Zoe said earlier, Temple is in between the two poorest zip codes in Philadelphia, but they’re really quickly gentrifying. There’s a serious lack of safe, affordable housing in Philadelphia generally so not only would people have to move out of their homes, there really isn’t anywhere to go. Many people in this neighborhood have owned their homes for decades. If gentrification leads to property tax increases, they couldn’t afford to keep those homes and would have to move out. Again, with few choices of where to go.

Temple has claimed that this project wouldn’t displace anyone, it would only knock down half a block of houses, but they have lied about development projects in the past so no one knows what to believe.

SA: How and why did you engage other students?

Zoë: In February, President Theobald and Student Government held a Question & Answer panel about the stadium. They didn’t invite any community members to the meeting. It was closed to anyone who didn’t have a TU ID and obviously it’s important to students because our tuition is going to be effected, but ultimately most students do not stay in North Philadelphia beyond their 4 years in school. The primary people the stadium is going to affect are the residents who have lived here for generations and want to continue to live here for generations. But students, when we’re organized, can have more direct impact on the decisions of the university than the community. So we need to work together. We held an action at the Q & A, asking President Theobald, “Where is the community?”  That action succeeded in getting a lot of students to realize the urgency to respond to community concerns, but again, not only respond by listening to concerns and then just plowing ahead with the plan, but addressing the concerns by stopping the plan.

SA: Tell me some more about trying to get President Theobald’s attention, what else did you do to try to get him to listen to you?

Anna: It’s been a long process, starting from when we launched 15Now at Temple. We’ve actually seen him in person about four times ever. At first we tried to go through the proper channels… we emailed, we called. We tried to deliver a letter to his office and, of course, we were met with police. He wouldn’t come out and get it.

He has a barbecue every spring where he makes burgers on his own grill and serves them to students. Really he’s making like 20 burgers and all the underpaid contract food service workers are making the rest. We held a mock awards ceremony at the barbecue where we gave him awards like “World’s Best Gentrifier.” We gave him some sunglasses since he was being so shady with his plans for the stadium, a heart so he could feel empathy for students and people of North Philadelphia, new glasses so he could see the situation more clearly. We gave him some sunscreen since he doesn’t seem to come outside much. The last thing was a pair of running sneakers because Temple was under Title 9 investigation and it was recommended to build a sexual assault crisis center. The University decided not to comply with that recommendation. So we gave him running sneakers in case he ever needs to walk or run the four miles to the nearest crisis center, it will make it easier on his feet.

SA: Now you’ve escalated to actions targeting City Council President Darrell Clarke, who also represents this district and who has thus far refused to meet with you. Why are you targeting him, and if he agrees to meet with you, what do you want to say?

Zoë: The residents of this community are Darrell Clarke’s constituents, they elected him and he’s supposed to represent them. As students, we saw President Theobald as the main target and the community members identified Darrell Clarke as their target. When the stadium plans were announced he made a couple of vague public comments against the stadium but hasn’t acknowledged the Stadium Stompers movement. Coming from him, those comments were significant and got a lot of publicity. So it’s our job to communicate to him that he represents us, he represents the people in North Philly who voted for him and it is his job to advocate on behalf of what the people here want. We have no illusions that he actually will, but we needed to call the question.

Anna: Basically, Philadelphia is a one party city, so Democrats always win. Darrell Clarke has run unopposed election after election. We want him to get the message that he can’t feel comfortable in his position. We’re building power and helping to lay the ground for an independent working class challenge to his position. It’s become very clear that the City Council takes its orders from the Temple Board of Trustees and not the other way around.

SA: Bernie Sanders has been talking about making public colleges and universities tuition-free. If Temple were tuition-free, do you think the priority would be building a new football stadium or would that necessitate a bigger change in how universities are run and how they see their mission?

Anna: One of the main things we’ve realized is that this stadium plan is a vanity project. It doesn’t make sense in any way economically. Stadiums are popular with alumni, but they usually end up costing the school money, especially a school like Temple that doesn’t have a huge football culture and has had exactly one good season of football.

Free tuition wouldn’t be enough to change Temple if the University was still controlled by the same Board of Trustees, which represents the major corporations in the city like Comcast, Goldman Sachs and the big law firms. The chairman of the board is the lawyer who defended Bill Cosby (years ago) when he was accused of assaulting a Temple employee. These figure heads and administrators who control our university and who are paid ridiculous amounts of money will never work in the interests of people who live here and of the students in general. Stadium Stompers has been calling for democratic control of the University by a body made up of students, workers and community residents. Obviously, if the current Board thinks that a football stadium is the priority right now, then they’re out of touch with reality and out of touch with the experiences of people living in this community and out of touch with students who are leaving this university thousands and thousands of dollars in debt.

We also understand the limits of fighting within the current structures of the university. It’s possible to hold them off from making this decision and we already have, we’ve already delayed the projected timetable. But they can just wait until there’s a lull in the movement and then push forward with the plan. Actually knowing that we fought the stadium for good would necessitate a complete change in how the University functions.