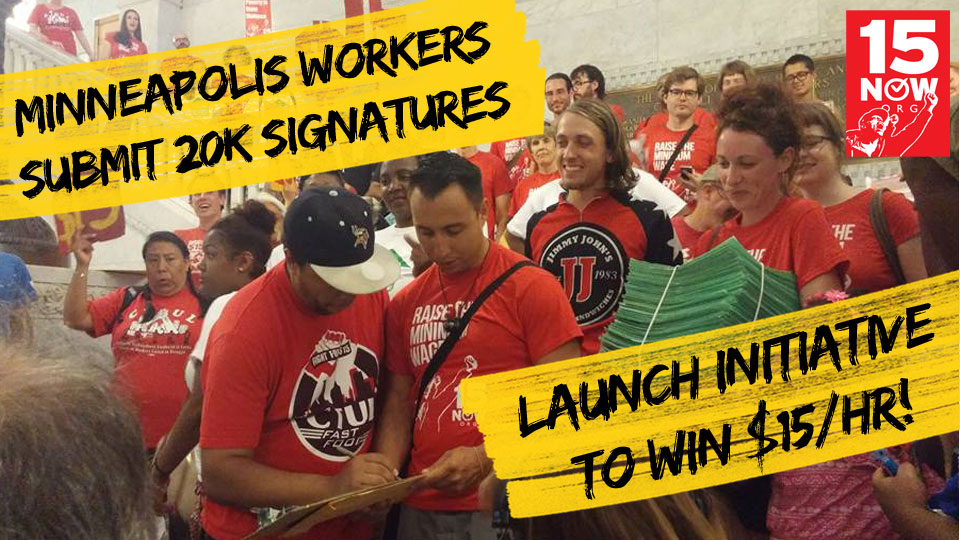 Today was one of the most powerful experiences I’ve had in the over 30 years I’ve spent as a worker and an activist fighting for social justice. Several hundred workers and supporters marched on City Hall and handed in 20,000 signatures to put $15/hour on the ballot in November. This initiative is about empowering working people in Minneapolis to address Minneapolis’ worst in the nation racial and economic inequalities. It took an enormous effort to get this far, but now we need to win in November. We need your help!

We must be ready for big business to spend millions of dollars to protect their profits and defeat a living wage. We need to raise one million dollars to win this campaign. If we win, it means almost a billion dollar transfer of wealth from big business into the hands of working people annually. That means every dollar we raise puts $1,000 directly into the pockets of Minneapolis workers.

Can you dig deep, and donate $48 dollars to win this campaign? That’s how much more a minimum wage worker would make every day if we win $15!

We’re gaining momentum, but this has been an uphill battle from the beginning.  Minneapolis Mayor Betsy Hodges and a majority of the City Council oppose a phased in $15 wage despite the fact that polls show that 82% of likely voters favor such a measure.  Ten weeks ago, we launched a vibrant campaign to collect signatures to put $15 on the ballot. Over a hundred people volunteered over 2,000 hours of their time to knock on doors in working class neighborhoods and engage those directly affected by poverty wages. Our campaign has been funded by ordinary people, with over 700 people making small donations to make this campaign possible.

Getting 20,000 signatures is only the first hurdle, however, for the fight for $15/hr in Minneapolis.  The City Attorney and some City Council members have raised questions about the legality of a Charter Amendment.  We’ve proven this initiative is perfectly legal for Minneapolis, but we all know there is a long history of politicians disenfranchising workers and people of color when it comes to defending the interests of big business.  But a key aspect of our legal strategy is building a movement of working people who can stand up to the Chamber of Commerce lawyers.

With your financial support, we can build an unstoppable working class movement to win $15/hour and beyond. Donate today.