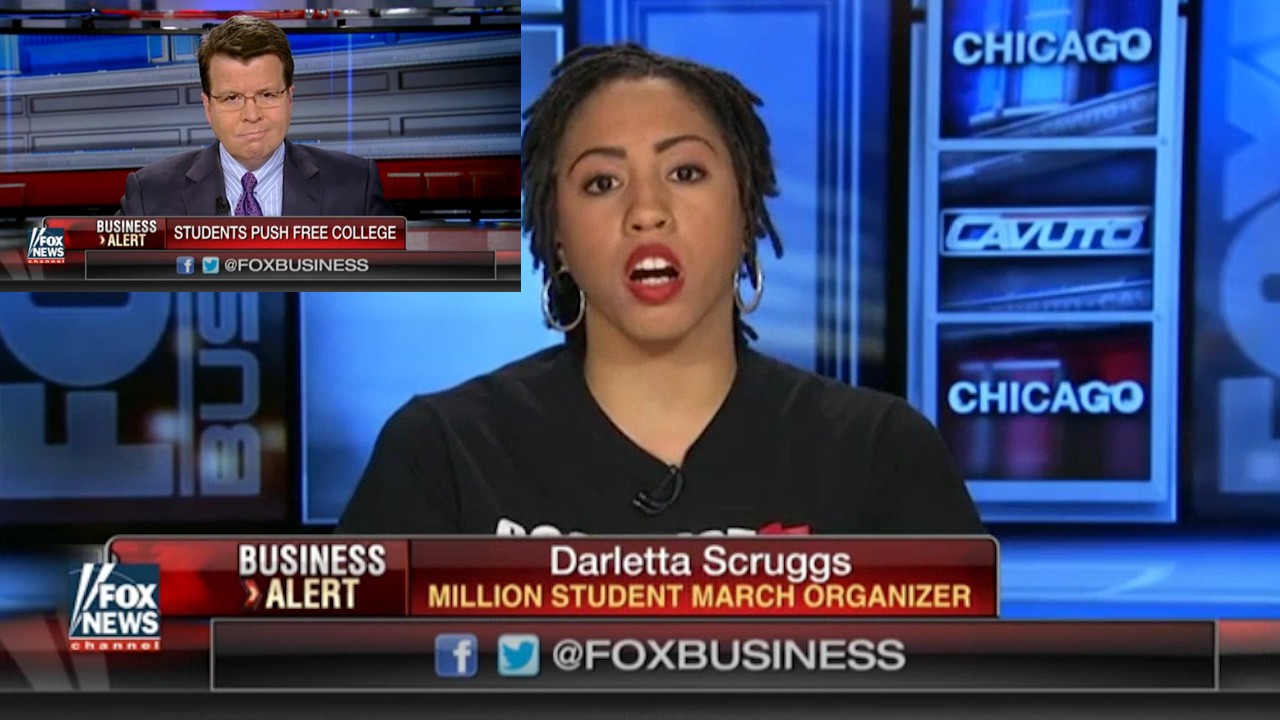 Fox News hoped their interview with Socialist Alternative member Darletta Scruggs would provide another punching bag to whip up their right-wing viewers. But Darletta completely turned the tables on Fox host Neil Cavuto, forcing him to defend of American capitalism’s failure to provide affordable education to millions. In less than four days, the video has gotten more than 7 million views and over 130,000 shares on Facebook.

Check out the video, then read our interview with Darletta Scruggs below.

Watch the full interview at the bottom of the post.

Fox Business invited Darletta to the live interview to discuss the success of the second #MillionStudentMarch day of action against Trump, racism and student debt. But the conversation quickly turned into a pitched battle over inequality, taxing the rich, Bernie Sanders, and even the merits of capitalism itself.

Darletta is a single mother from the South Side of Chicago, where she has been an active member of Socialist Alternative since 2014.  She is a leading Movement4Bernie organizer and a member of the #MillionStudentMarch National Organizing Committee. Socialist Alternative launched #MillionStudentMarch last year and there have been two major national day of actions since!

How did you get involved with #MillionStudentMarch?

Darletta: Like many young people in U.S., I had been told all my life that a college education is the route I had to take in order to be successful, but growing up financially poor, and from an impoverished community, I didn’t have the necessary means to pay for college. Loans were my only way to get a higher education. It’s not that people don’t go to college because they don’t want to, but it’s just financially impossible to find the means to pay.

I helped organize both #MillionStudentMarch actions in Chicago to fight for free public college and am now on the National Organizing Committee as well.

What work have you done around the Bernie Sanders campaign?

Darletta: Socialist Alternative launched #Movement4Bernie earlier in the campaign, and in Chicago it’s been a huge success. We’ve organized two #March4Bernie rallies, with over 5,000 people at each one, in support of a political revolution against the billionaire class, and also connecting this movement to fighting other corporate politicians like Rahm “Mayor 1%” Emanuel, who is severely attacking public education here in Chicago.

We’re calling on Bernie supporters to break away from the corrupted Democratic Party, and for Bernie to run as an independent through November and build a new party of the 99%.

Why are you a member of Socialist Alternative?

Darletta: I joined Socialist Alternative (SA) two years ago because the I didn’t see answers to crisis that I was seeing in my everyday life – not in school, church, or the Democratic Party.  I was seeking answers to the questions that I had and I think what SA has done is to connect the dots of systemic inequality, like economic, racial and gender inequalities, to the system of capitalism that profits off of these divisions in society.

ABOUT US
Socialist Alternative is a national organization fighting in our workplaces, communities, and campuses against the exploitation and injustices people face every day. We are community activists fighting against budget cuts in public services; we are activists campaigning for a $15 an hour minimum wage and fighting, democratic unions; we are people of all colors speaking out against racism and attacks on immigrants, students organizing against tuition hikes and war, women and men fighting sexism and homophobia.
Contact us: info@socialistalternative.org
FOLLOW US
© Socialist Alternative 2019 | All rights reserved
68 Shares
Tweet
Share68