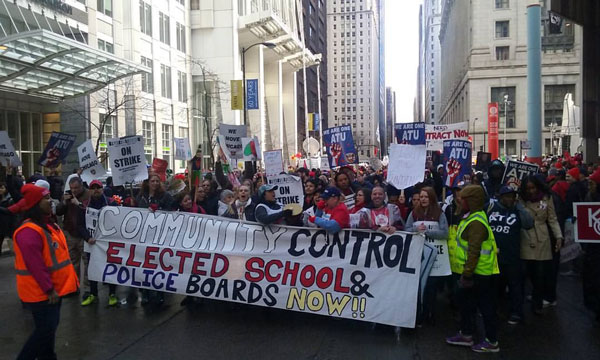 On April 1, Chicago teachers shut down the third largest school district in the U.S. to protest the Chicago Public School (CPS) system’s failure to pay normal increases to teachers guaranteed by contract and also to demand adequate funding for the school system. Gathering at over 600 public schools starting at 6am on Friday, teachers rallied at each school for an hour or two then united at ten different meet-up points. Across the city, thousands of teachers, parents, students, community members, and members of other unions participated.

The Chicago Teachers Union (CTU) which organized the one day political strike called for other unions and workers to join in a fight for funding and were answered enthusiastically. Over 40 community groups acted in solidarity. The Fight for 15 coordinated walkouts at McDonald’s locations throughout Chicago. Teachers joined marches that stopped at McDonald’s to protest the low wages plaguing working class communities.

On the Northwest side, teachers were joined by Northeastern Illinois University workers organized by AFSCME. The action in that neighborhood moved from McDonald’s to a rally at Northeastern’s campus protesting college budget cuts by Republican Governor Bruce Rauner. Speakers at the Northeastern rally included Seattle socialist city councilmember, Kshama Sawant. Rallies also took place at the University of Illinois at Chicago and Chicago State University where student activists who recently stepped forward to fight Donald Trump’s racism and budget cuts stood with the CTU.

Signs on the picket lines parodied Governor Rauner and Democratic Mayor Rahm Emanuel as ruthless villains representing the 1%. Both have both committed themselves to cutting education and attacking union rights as a part of a pro-business agenda. But teachers and the many thousands out to support them did not buy that the state is “broke.” Instead, they argued that the state and city budgets were “broke on purpose” and demanded full funding. One slogan captured the sentiment: “We need teachers. We need books. We need the money that the bankers took.”

Refunding toxic swaps; a financial transaction tax; progressive taxation of the rich; redirecting millions from corporate subsidies – the question of the day was not whether there is revenue available to fully fund schools and services, but how could a fight be waged to wrest it from billionaires like Ken Griffin who fund both Rahm and Rauner.

The corporate Chicago press attacked the CTU strike as a “tantrum” and CPS sued the union on April 1 claiming the strike was illegal, but denunciations did nothing to stem the day’s ecstatic mood. Citywide actions converged in a massive rally of up to 15,000 downtown at rush hour. Speakers denounced the greed of the 1% and called for full funding of education and services, but many did not hear them as the crowd had grown far too large. Marching through the rain, teachers and their supporters shut down major streets in a show of working class unity.

The CTU’s April 1 strike was a true achievement. Although the situation in the union’s contract negotiations with the city is currently quite murky, Rahm may be forced to make concessions [for more details see the accompanying piece below]. But as the CTU has made very clear, they are not just fighting for a decent contract for their members, but for quality education and quality life for all of their students. Of course these are not contradictory goals, as teacher activists have emphasized in the slogan “Our teaching conditions are students’ learning conditions.” But in the current circumstances, a new contract for teachers, like in 2012, will not mean an end to assaults on public education.

Critically, the teachers’ strike action was explicitly geared towards building solidarity and confidence to prepare CTU members and working class communities for future struggles. Many teachers expressed huge appreciation for the deep community support. What is happening in Chicago has many lessons for the rebuilding of a fighting labor movement across the country.

There is huge potential coming out of April 1 to build a sustained fight back against vicious corporate politics in Illinois. Any gains won by the teachers will be a product of mass solidarity, and it’s crucial that those gains be used to lay the groundwork for continued mass struggle against Rahm and Rauner. The duo’s alliance against working people exposes the two major parties as pro-corporate collaborators. The CTU has played a highly effective role in galvanizing working class anger at the establishment in the city and can play an historical role in turning that anger towards mounting a political challenge to corporate domination. Given the totally corrupt Chicago Democratic Party, this will require building a new political party of the 99% out of mass struggle.

The following article appears in the new issue of Socialist Alternative. It was written before the strike but gives useful background to the above report.

Chicago teachers are taking a stand to defend public education against the billionaires’ agenda. On April 1st the Chicago Teachers’ Union (CTU), after 9 months without a contract, will launch a one-day city-wide strike to demand the funding that public education needs.

Rather than simply replicating its 2012 nine-day strike which pushed back but did not defeat many of the education deformers’ demands, CTU is now involving other unions and community groups in a one-day, political strike whose sharpest demand is to tax the richest 5% of Illinoisians up to $6 billion to pay for educational and social needs. Although this demand doesn’t mention the biggest prize – a transaction tax on the La Salle Street futures and commodities exchanges, which could raise billions, the demand that is being made puts the cost of the crisis where it belongs: on the super-rich. The union also calls for action against banks that have cheated City and State governments through toxic swaps, and against the TIF funding racket which allows the Mayor and City Council to give rich developers millions that were meant for schools.

The Emanuel administration began the academic year (and negotiations) with a plan to lay off 1,500 employees, targeting Special Education workers for layoff at a rate ten times that of other groups. This sabotaged the entire system, as schools were forced to cram special needs students into regular classrooms. Then, after months of bargaining, the Chicago Public School (CPS) Board stuck on its demand for teachers to pick up the whole of their pension payments: a 7% pay cut. (The schools’ pension funding crisis was created by the Board’s past failures to actually make these payments).

In February the Board made a contract offer that addressed some of the union’s demands, but the union rejected it because of language that was unenforceable or could be overruled by existing law. Key issues were class and caseload sizes, the 7% pension payment, layoffs, a cap on new charter schools, a moratorium on school closings, and reductions in standardized testing and punitive teacher evaluations.

CPS responded to the union’s “no” vote by publicly threatening to immediately end the 7% pension payments. Although later put on hold, this illegal threat, along with the Board’s existing refusal to pay contractually mandated “step and lane” pay increases, created a legal basis for immediate strike action without going through mediation, which would have delayed strike action until almost the end of the school year.

The union has boldly used the Board’s over-reach as a way to challenge the power of the Mayor, the Governor, the legislature and their big business backers.

This boldness comes from years of internal organizing to democratize the union, while building community alliances to fight against school closures and standardized testing. Despite three years of harassment and retaliation for the 2012 strike, including the closure of 50 schools involving huge layoffs in 2013, and the illness of its President Karen Lewis, whom polls showed beating Mayor 1% if she had been able to run in the 2015 elections, the CTU has come back fighting and continues to break new ground in building community support.

For example, the union voted to support Black Lives Matter activists in the #RahmResign protests that began last year after Mayor Emanuel had concealed the police murder of Laquan McDonald. Although still controversial within the union, this position has elevated the CTU’s position as a defender of black and working class people against the racist justice system and trigger-happy cops.

The April 1st strike continues the CTU’s track record of building working class, grassroots power. The union is calling for day-long pickets at all 600+ schools, solidarity walkouts and a mass rally downtown to disrupt the evening rush. In a move unprecedented in recent labor struggles,, the Fight for Fifteen declared a simultaneous sympathy strike, while SEIU Healthcare, college and university unions, community groups and the city’s subway train operators’ union are all supporting the day of action. Many are planning solidarity actions that will converge on the downtown, rush-hour rally.

April 1st is unmistakably a political strike, legalized by the overreach of the Board when it unilaterally canceled raises. If it forces the city to return to the bargaining table with an enforceable contract, this would be a real victory, boosting the confidence of workers throughout the region. A victory for the CTU and its allies against the billionaires’ agenda would put it in position to galvanize all of the ongoing struggles in Chicago and the region into a fighting, ongoing movement  with national implications.

This would also pose the question of launching a new political force of the 99% in Chicago, with the CTU playing a key role, which could truly challenge the domination of the 1% in the years ahead.