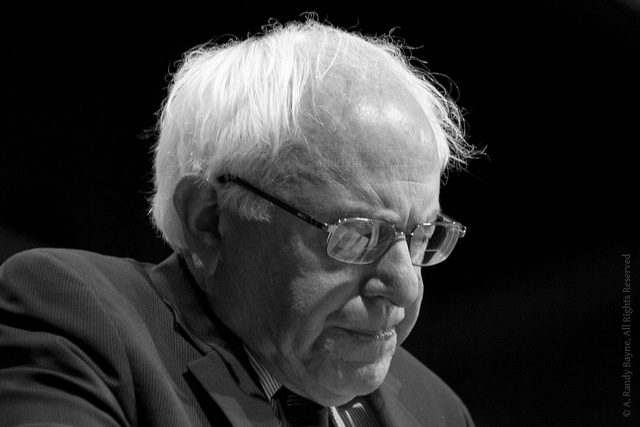 In an interview on March 23 on The Young Turks, Bernie Sanders laid out the need to build movements and run candidates beyond his own presidential bid to achieve a “political revolution.” However, he also outlined a strategy to push Hillary Clinton to the left, should he lose the Democratic Party primaries. Many Bernie supporters understood his comments as putting conditions on Clinton for his endorsement for her should he lose and they see this as positive. However, this plan will not take the political revolution forward. If Sanders loses in this Wall Street dominated party, Bernie needs to run until November as an independent or with the Green Party’s Jill Stein. Bernie’s supporters cannot allow this movement to become imprisoned within the narrow confines of the Democratic Party.

Hundreds of thousands gathered in Washington state on Saturday, March 26, to caucus for Bernie Sanders. Despite a huge delegate lead for former Secretary of State Hillary Clinton, the political revolution is alive and fighting back. Sanders took Washington state, Alaska, and Hawaii in a landslide. Tens of thousands flooded Seattle’s Safeco Field the day before the caucuses. In all the remaining states that have not yet voted, millennials and other “Sandernistas” are eager to raise their voice for $15 an hour nationwide, for Medicare for all, and for tuition-free education.

At the same time, the debate has started about what to do if Sanders falls further behind and can’t win the nomination. Even after the impressive successes on March 26, he needs to win 57 percent of all the remaining pledged delegates from all the upcoming states just to draw even with Clinton, not counting any super-delegates – who are 490 to 27 against Bernie. While there are upcoming primaries where Sanders is poised to do well, polls in a number of other states, including New York show, significant obstacles for Sanders. Sanders himself responded to this growing question in an March 23 interview on The Young Turks. (https://www.youtube.com/watch?v=KxVbuO7xM4g )

‘If we don’t win,” the senator from Vermont outlined, the question is, “what [is] the Democratic establishment going to do for us?’” Sanders went on: “Are they going to welcome into the Democratic Party the working class of this country and young people or is it going be a party of the upper middle class and the cocktail crowd and the heavy campaign contributors?”

Unfortunately, the experience of the Bernie Sanders’ campaign reveals the answer: The DNC might allow you for a time at their cocktail party, but this is a party paid for – and, therefore, controlled by – Wall Street and big business.

Kshama Sawant and Socialist Alternative argued, long before Bernie’s announced his candidacy, that Sanders should run independently. Instead, he decided to try to run within the Democratic Party. But Kshama and Socialist Alternative did not stand on the sidelines. When Bernie Sanders, unapologetically describing himself as a  “democratic socialist,” announced his bid to run with a pro-working-class agenda within the framework of a pro-corporate, anti-worker party, we campaigned to build support for Bernie’s program. We have, of course, disagreements with Bernie including important aspects of his foreign policy. But we energetically campaigned to take Bernie’s platform to the broadest audience. We saw that Bernie was offering a political program that could mobilize millions. We became part of the growing upheaval under the slogan of a “political revolution against the billionaire class.” We launched #Movement4Bernie and engaged actively in Labor for Bernie in order to participate in discussions with the most serious Bernie supporters.

What has been the experience so far? On the positive side, tens of millions have been inspired by a bold call to take the power out of the hands of the corporate elite, their politicians, and the establishment media.

On the other side, the Democratic Party primaries have proved hostile territory for such a call. The Democratic Party is dominated by Wall Street money that Clinton easily cashed in. Bernie had to reach out to millions of individuals and their small contributions to try to match that. The primaries are run through the structures of that party which is controlled by its establishment, as evidenced by the unelected superdelegates. If this process continues without a major upheaval on a scale that we have not yet seen, the political revolutionaries will lose that battle.

Despite having many recent big successes, Bernie Sanders is still lagging behind in these primaries. This is not because his policies don’t resonate and inspire people. He’s significantly behind because the Democratic party functions to promote corporate politicians like Clinton who claim to be more progressive than the racists and sexists of the right-wing, while still attacking the interests of working people and the poor, to a “lesser” degree.

“I’ve talked to Democratic Party leaders,” argues Bernie, “and said you know what, instead of going around and raising all kinds of money from wealthy people, why don’t you meet in some football stadium and bring out fifty or hundred thousand people, bring the damn Senate in there, Senate Democrats, and start talking to people, ask them what they want you to do.”

So why doesn’t the Democratic Party leadership fill football stadiums? Maybe it’s because the corporate-dominated politics of the Democratic Party don’t inspire people. Also, maybe it’s because they won’t, because almost all these establishment Democrats actually do not want to mobilize all these working people into political activity. Tens of thousands shouted their support for Bernie at Seattle’s Safeco Field on Saturday. Compare that to Clinton’s rally in Seattle with around 2,000 people in a high-school gym. Corporate Democrats are the “super-delegates” who by 467 to 26 support Clinton, the Walmart, Wall Street, war mongering candidate. They are the ones who Bernie has described as “scared to death” about his success.

“If I can’t make it – and we want to try as hard as we can till the last vote is cast,” argued Bernie Sanders in the interview, “we want to completely revitalize the Democratic Party and make it a party of the people rather than just one of large campaign contributors.”

Interviewer Cenk Uygur of The Young Turks asked Bernie how would he do this, and what policy positions he would want Clinton to take up.

“I want Secretary Clinton, if she is the nominee, to come out for a Medicare for all, single-payer health care system, I want 15 bucks an hour as a minimum wage, I want to rebuild our crumbling infrastructure, Flint, Michigan, is not the only community in America that doesn’t have safe drinking water … I want a vigorous effort to address climate change … making public colleges and universities tuition free, Wall Street tax on speculation to pay for that, ending all these corporate loopholes.”

For people who remember Sanders’ previous promise to endorse Clinton, should he lose, this can sound more positive as it puts up some demands on her. Some people have begun to hope that Sanders might not endorse Hillary.

Sanders has shifted to the left in the course of this campaign; he has turned his fire increasingly forcefully against the establishment and its ties to corporate interests. This is a big part of his massive appeal.

But what is the logic of Sanders’ position taken to its conclusion? Can the Democratic Party establishment accept his full program? It is certainly true that Hillary and the establishment want Sanders on board for the general election and for him to bring along his base, especially among young people. The primaries have exposed her weaknesses and the shallowness of the support for the establishment.

We have pointed out before that the Democratic establishment, reflecting the interests of the top one percent, cannot accept Sanders’ program of radical reforms. It would give too much encouragement to the working class to fight for real change. Of course, this does not mean that the Democrats can’t shift their rhetoric a few degrees to the left, as Hillary already has. But does that mean that, when push comes to shove, they will deliver on primary promises?

The way Sanders raised these demands to Clinton, in the context of him fighting for every last vote, suggests his strategy is about trying to push her to the left and reform the Democratic Party some time in the future when his campaign is no longer dangerous for the establishment.

This is exactly the point which Cenk Uygur pressed Sanders on: Even if Clinton makes this or  that or promise, would Bernie really believe her?

In answering, Sanders referred to Tom Donahue, lobbyist of the Chamber of Commerce, who said, “Don’t worry what she [Clinton] said in the campaign, she’s just trying to match Bernie Sanders. If she’s elected, I think she’ll be okay on the TPP,” the neoliberal free-trade agreement she pushed as a secretary of state and is now suddenly opposed to.

Seeing the contradiction in his position, Sanders adds: “What we need is to create a movement which holds elected officials accountable and not let them flip on the issues.”

Without movements, without the energy of the masses flooding into the political arena, nothing will be changed. But without an organizational and political backbone, these movements will be co-opted and sold out. This has happened so many times in the past

“We need – win or lose for me – a political revolution”

When the Democrats make clear that they won’t adopt the program of Sanders’ political revolution, what will he do? In the interview, Sanders correctly emphasized: “we need – win or lose for me – a political revolution which starts electing people who are accountable to the working families in this country.”

We say, let’s get organized, let’s build the movements and the independent structures to do so. Let’s not spend more energy within the deadend framework of the Democratic Party, but build a party based on working-class people.

So far, Bernie Sanders campaign has juggled the contradiction of running for a pro-working-class program in a Wall-Street-dominated party. Until now, the dominant feature within that contradiction has been an uprising of a new generation against the corporate politicians. A new generation is searching for a political alternative. If Sanders runs just to push Clinton to the left, his campaign will sooner rather than later turn into a cover for the Democratic Party machine. The dominant feature of his campaign would turn into its opposite; from encouraging revolt, to co-opting and channeling millions of his energetic supporters into the corporate campaign of Clinton. It would also demoralize many of the best people.

Socialist Alternative has outlined how Bernie could run all through November without ignoring the fears about Trump and the huge pressure to rally behind Clinton, see our article from March 17.

As it becomes more and more clear that Bernie Sanders is very unlikely to have any chance at the Democratic Party convention, with all its undemocratic procedures, we need to discuss this plan B. Bernie Sanders and his supporters need to develop a strategy to unleash the movement from the constraints of this Wall Street party, not allow it to be jailed within the undemocratic primary behind Clinton. The Democratic Party was built to be that prison controlled by corporate powers to serve their interests. Just painting the prison walls of the Democratic Party will not do the job. An independent party of, by, and for the 99% is needed.