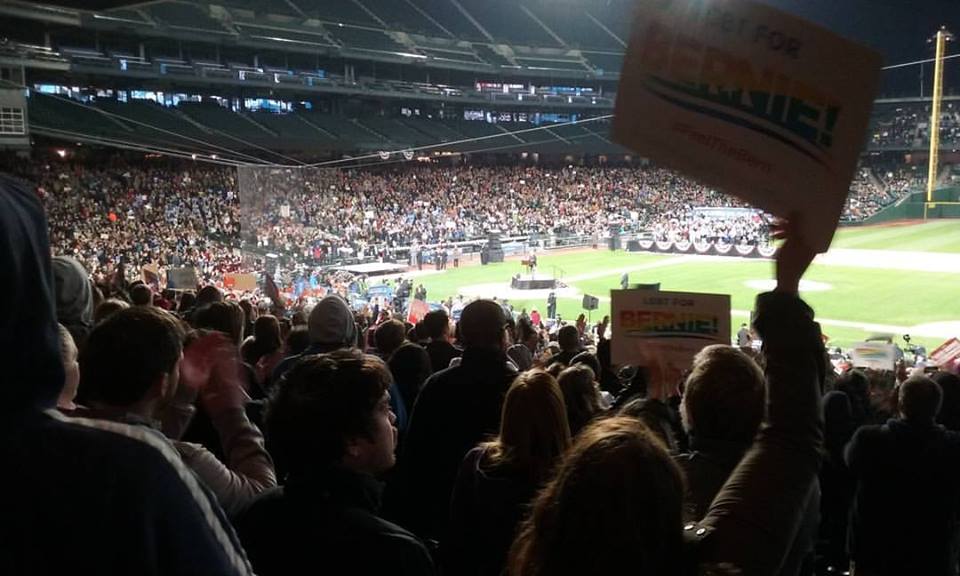 Socialist Kshama Sawant spoke to one of Bernie Sander’s biggest rallies to date on Friday, the evening before Washington State voters delivered a whopping 73% victory for Sanders. An estimated 20,000 came to Seattle’s Safeco Field. Of course, in the Seattle area especially, Sanders had something of a home field advantage, competing with Clinton on the turf that has twice elected Socialist Alternative’s Kshama Sawant to the Seattle City Council. Before Bernie took the stage, Kshama spoke, calling for a “new party of the 99%.”

Seattle, are you ready for a political revolution?

Are you ready to welcome Bernie Sanders to the first major city that won a $15 minimum wage?

My name is Kshama Sawant. I am Seattle’s socialist City Councilmember. I was elected without taking a dime in corporate cash, calling for $15/hour and running as an independent against the corporate establishment.

Our grassroots campaign was centered around the $15/hour demand, something that the political and media establishment sneered at. But we won.

Do you know why we won? Because we organized! Because the workers of Seattle organized.

Because: When we fight, we win! [chanted several times]

Last November I got re-elected despite half a million in corporate cash being thrown against us. That’s what Bernie’s campaign is about: Fighting back and throwing out the rulebook of corporate politics.

Sisters and brothers, we must stand united against the bigotry misogyny, and Islamophobia of billionaire Donald Trump.

But let’s be clear, Trump’s vile campaign doesn’t come from nowhere. It grows out of the swamp of racism and sexism that corporate politics swims in.

Let’s say what we stand for loud and clear: Black Lives Matter!

Sisters and brothers, just 90 companies caused almost two thirds of global carbon emissions that are burning up our planet. This is the product of the gigantic casino of speculation created by those highway robbers on Wall Street. In this system, the market is God and everything is sacrificed at the altar of profit.

The future of our planet demands that we democratically decide how to use the resources of these giant corporations by taking them into democratic public ownership.

That is what democratic socialism is – putting people and the planet over profits!

Because as Bernie says, Congress does not regulate Wall Street controls Congress. Big corporations fund and control these political parties. I agree with Bernie, we need to think big and outside the box.

We need a new party of the 99% and we need candidates everywhere fighting for what Bernie calls for: $15/hour, Medicare for all, and free education.

I want to feel the Bern through November, how about you?

We need to build a revolution that can really take our country out of the hands of billionaires and into the hands of working people.