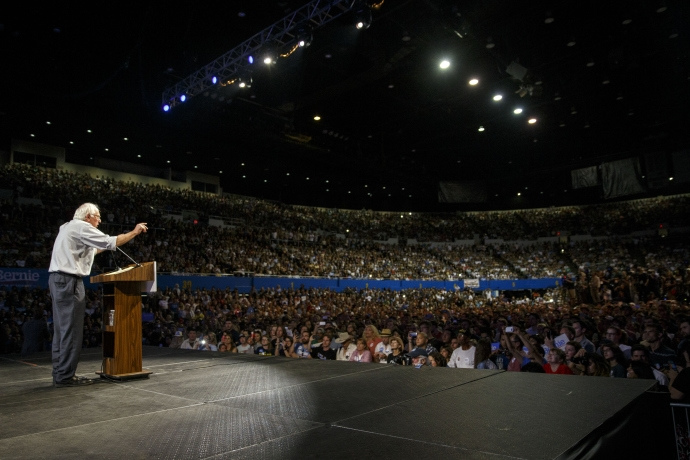 Bernie Sanders’ campaign has excited millions and brought a discussion about socialism into the mainstream of U.S. society. In addition to getting record donations from working-class people, Sanders has unprecedented support among youth. This is an important indicator for the future of social movements and politics. Yet the contradiction remains that Sanders is running as a Democratic Party candidate, a party that has been “the graveyard of social movements.”

The organized left has reacted to this historic yet complex situation in a variety of ways, which raises critical questions. How do socialists relate to broader movements without falling into the trap of abandoning their principles and politics, while working in a nonsectarian fashion? What is the role of socialists in relation to the Sanders campaign?

Some groups on the far left have done nothing but denounce Sanders without realizing the opportunities inherent in the situation, with millions of newly radicalizing young people and workers. Socialist Alternative has gotten involved in the Sanders campaign while pointing toward the corporate-controlled nature of the Democratic Party, the need for a politicized movement from below, and a new party of the 99% to fight against the right wing and Wall Street.

The Democratic Socialists of America (DSA) is the largest left group in the U.S. – albeit loosely organized – and they have also gotten involved in Bernie’s campaign. Yet important differences in strategy, method, and approach exist between Socialist Alternative and DSA on how to relate to Sanders.

DSA, in its 40-year existence, has always been explicit about its goal of reforming the Democrats to the left. We believe the Democratic Party fundamentally serves the interests of the corporate elite and that the obstacles to it being “captured” by the left are far greater than the challenges of building a new mass working-class party. Likewise, many of the leading lights in DSA believe that capitalism can be reformed step by step and does not need to be replaced root and branch. We are for every reform that improves the position of working people, but we do not believe that capitalism can be defanged and made harmless.

The DSA’s approach to Sanders’ campaign reflects their social-democratic politics. They have provided people with a range of material to use to support the campaign. Their leaflets contain a lot of useful information about positive aspects of Sanders’ record. They reference the massive interest in socialist ideas and the need to build the campaign to win Bernie’s program. This is good, but their material provides little in terms of how to fight against the billionaire-backed leadership of the Democratic Party or how to build movements for social change.

For instance, DSA’s material never states what Sanders is up against in the Democratic primaries, from corporate cash to media bashing to superdelegates and DNC sabotage. Meanwhile, they reference promising poll numbers for Bernie and point to the significance of his support. This gives the reader the impression that the nomination can be relatively easily won. However, in our view, it will require a massive political upheaval to defeat Clinton and the Democratic Party establishment. This requires politicizing Bernie’s supporters and connecting the campaign to building social movements.

Our experience has been that there is a combative mood to fight back against corporate domination among Sanders supporters and that this mood can be transformed into building for struggles and a movement. That’s why Kshama Sawant, Socialist Alternative member and Seattle City Councilmember, initiated #Movement4Bernie.

In Chicago, Socialist Alternative members helped to initiate the “march for Bernie” in January, with 4,000 people participating. Marchers heard speeches from union activists and Black Lives Matter organizers calling for the resignation of “Mayor 1%” Rahm Emanuel. This helped to bring together social movements in the struggle for economic equality and racial justice. SA speakers pointed out that it is the Democratic Party that runs Chicago and is responsible for overseeing a racist police force and attacking public education. We argue we need a mass movement against economic inequality and institutional racism. This will require independent struggle from below, with clear demands, coordinated actions, and democratic structures, along with building a new political party to represent working people out of the Sanders campaign.

DSA’s material often highlights the fight against racism and Bernie’s program to benefit communities of color, but there isn’t a word in their leaflets on the need to build protests and direct action against police violence. DSA’s material on the Sanders campaign and racism seems to imply that electing Bernie would fix most problems of racism in this country.

While groups like “Bernie or Bust” and “Progressives Against Hillary Clinton” reflect the unease with Sanders’ promise to endorse whoever becomes the Democratic Party nominee, DSA is silent on this issue. We think it would be a tragedy if the enthusiastic support for Sanders ends up being funneled into the campaign of a Wall Street politician. While socialists need to recognize the fears of workers, women, and people of color of the reactionaries in the Republican race, they have a political responsibility to politically expose Hillary Clinton’s service to the interests of Walmart and Wall Street. Socialist Alternative will not support Hillary Clinton, and we think Bernie should run all the way to November as an independent if he doesn’t get the Democratic nomination.

Socialist Alternative stands for building the type of independent movement necessary not only for Sanders to win but also for ongoing struggle against the billionaire class. This necessary strategy includes political representation for working-class people against the reactionary Republicans and the corporate-backed Democrats. In doing so, we are also critical of Sanders, particularly on foreign policy (1/28/2016). DSA is silent on this issue. Genuine socialism means united international struggle and political clarity on issues facing working-class people worldwide.

We hope that this article can provoke more discussion as part of the ongoing debate in the organized left on the Sanders campaign. The widely read Jacobin magazine edited by Bhaskar Sunkara, for example, takes a position not terribly different to the DSA.

DSA, unfortunately, largely echoes the current mood to support Sanders while failing in pushing the debate further about the nature of the Democratic Party and the need for a wider political upheaval to defeat Clinton. Socialist Alternative’s approach of getting involved with the Sanders campaign to point the way forward to win by building independent social movements and calling for a new party will be proven correct by the coming tumultuous events and mass struggles in months and years to come.

A New Era of Capitalist Instability