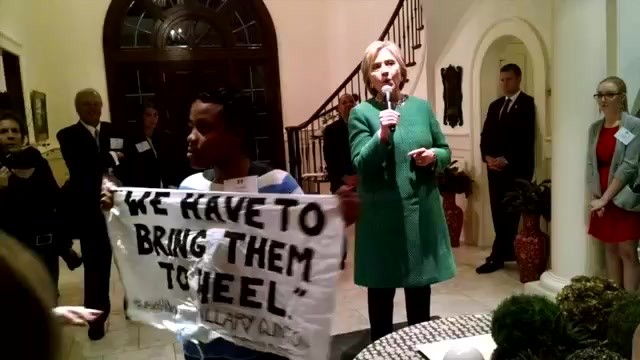 For anyone who has been following Hillary Clinton’s presidential campaign, you may have caught wind of her newly found progressive ideas, pro-LGBTQ stances, and vague critique of Wall Street – which is funding her campaign. Hillary, like any experienced politician, has transformed into a political chameleon, every day becoming more and more like her opponent, Bernie Sanders, at least in words. Hillary has been faced with a huge challenge that she and the DNC are trying to get in front of: the hundreds of thousands of people, particularly the youth, being energized by Bernie’s call for a political revolution against the billionaire class! Hillary has now turned her chameleonic tendencies in the direction of firming up black support.

Like many politicians, Hillary is relying on the corporate-media-driven historical amnesia and misinformation to win black voters over, but anyone familiar with the true history of the Clinton dynasty – which has molded and supported candidates like Chicago’s Mayor Rahm Emanuel – knows very well why Clinton doesn’t deserve the black vote or any working-class vote. During the first Clinton presidency, the War on Drugs and the Violent Crime Control and Law Enforcement Act of 1994 devastated black communities by providing for 100,000 new police officers and $9.7 billion in funding for prisons.

This was the ramping up of mass incarceration, which has more black people in prison today than were enslaved in 1850! Not only did we see generations of black youth being funneled into the prison system but also the attack on welfare reforms, slashing funding to crucial social services and crippling single-mother-led households that were being created due to the masses of black men being incarcerated. We also must not forget the “three strikes” rule that Hillary adamantly supported against repeat offenders, saying in August: “We need more police, we need more and tougher prison sentences for repeat offenders. The three strikes and you’re out for violent offenders has to be part of the plan. We need more prisons to keep violent offenders for as long as it takes it takes to keep them off the streets.”

In the words of Michelle Alexander, in a recent article written in The Nation titled “Why Hillary Clinton Doesn’t Deserve The Black Vote,” Clinton “has mastered the art of sending mixed cultural messages,” (2/10/2016). For years, Bill and Hillary publicly called out “violent offenders,” which is often coded language since the actual policies carried out contradict that. The United States leads the world in the number of people incarcerated in federal and state correctional facilities. There are currently more than 2 million people in American prisons or jails. Approximately one-quarter of those people held in U.S. prisons or jails have been convicted of a drug offense. Another example of Clinton sending mixed cultural messages is her comment on gangs in 1994: “They are not just gangs of kids anymore. They are often the kinds of kids that are called superpredators. No conscience, no empathy. We can talk about why they ended up that way, but first we have to bring them to heel,” (Fair.org, 2/27/2016). Do black folks want a president who views black children in gangs as “superpredators”?

We Need Real Candidates of the 99%

Hillary’s pseudo-progressive speeches and public comments often contradict the actual policies she supports. She often talks about helping address economic inequality and the enormous wage gap between the wealthy and the poor, but when it came to the question of supporting a $15 minimum wage, her response was, “I’m comfortable with $12.” For years she sat for years on the board of Walmart, which is one of the largest poverty-wage employers in the country and has fought tooth and nail to keep unions out of its stores. How can someone claim they are for addressing poverty but support having workers continue to work for poverty wages?

Hillary often claims she is a candidate of the people, but in the first presidential debate she openly said, “I represented Wall Street as a senator from New York,” (Politico.com, 10/13/2015). The same Wall Street during the economic crash of 2007-08 caused economic devastation in large sections of the black working class due to the effects of the subprime loan crisis and the massive number of foreclosures that followed.

Hillary Clinton does not support the black community! From her campaign donations from private prison lobbyists and Wall Street banks like JPMorgan Chase to her support for closing public schools largely in communities of color and her continued loyalty to corporate hacks like Rahm Emanuel in Chicago, Hillary’s flip-flops and pseudo-progressive rhetoric should not fool the hundred of thousands of black working and poor families that are struggling to survive under policies that she supported and attacks from a greedy billionaire class that she represents. We should see Hillary for what she truly is: a loyal servant of Wall Street and the billionaire class.

Working people and black folks need a candidate who will stand up to Wall Street and to corporate candidates like Hillary. We need a candidate for the 99%, not the billionaire class! This is why Cornell West, Killer Mike, and Erica Garner as well as many others, have come out in support of Bernie Sanders, whose program really opposes corporate interests. Beyond this election, we need to continue to develop a mass movement for black freedom, linked to the fight to end the whole racist capitalist system. And right now, we need to build a political force that truly represents the interests of black workers and all workers.