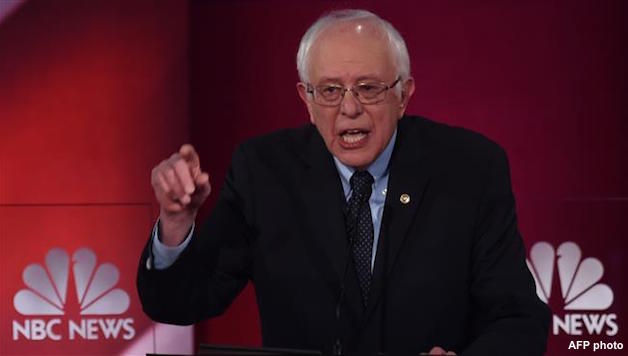 An enthusiastic crowd packed Seattle’s Spinnaker Bay Brewery to watch the fourth Democratic Debate. The audience almost unanimously supported Bernie Sanders, breaking into applause for him throughout the evening.

Bernie’s campaign has gained momentum in recent weeks, reflected in poll numbers in both Iowa and New Hampshire. His lead in New Hampshire has increased, and Iowa polls have been alternating between a close race and an outright lead for Sanders. The latest Des Moines Register poll shows Clinton at 42% to Sanders 40%.

While for all previous Democratic debates the corporate media declared victory for Clinton (often contradicting their own online polls), this time many pundits acknowledged Sander’s stronger performance.

More so than in previous debates, Sanders drew a sharp distinction between himself and Clinton, emphasizing her links to big business. Sanders called out Clinton for taking corporate donations, and pointed to her links to Goldman Sachs, which paid her over $600,000 in speaking fees in one year alone. He remarked how strange it is that Goldman Sachs paid $5 billion in fines without one executive prosecuted for a crime, while the justice system sends marijuana smokers to jail, prompting an enthusiastic response from the audience.

Sanders explained, “Goldman Sachs has given this country two secretaries of treasury, one on the Republicans, one under Democrats. The leader of Goldman Sachs is a billionaire who comes to Congress and tells us we should cut Social Security, Medicare, and Medicaid.”

Sanders was strong on the health care questions, where Clinton continued her dishonest attempts to portray Sanders support for a Medicare-for-all system as an effort to raise taxes on the Middle Class and destroy the progressive gains of the Affordable Care Act. He countered that her claims were nonsense; there are 29 million people still without health insurance and Medicare-for-all would save people money because they would stop paying insurance premiums.

Socialist Councilmember Kshama Sawant and Socialist Alternative’s Phillip Locker were among the speakers who addressed the crowd after the debate, and spoke to loud applause about the need to build an independent movement for Bernie, and a new political party of the 99%.