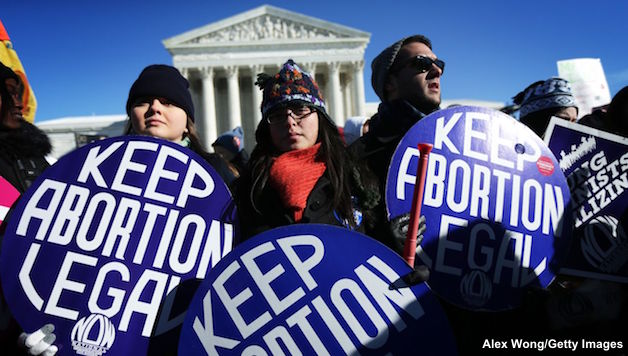 In November, the U.S. Supreme Court agreed to review the most consequential case on abortion rights since the 1992 ruling in Planned Parenthood v. Casey. The case, Whole Woman’s Health v. Cole, addresses Texas law HB2, which has led to the closure of more than half the state’s abortion clinics since 2013. This is a clear attack on reproductive justice that could effectively cut off access to abortion for millions of working-class women and women of color.

But decades of retreat have shown that the strategy of the mainstream organizations – namely, electing Democrats – has been ineffective, especially in states dominated by GOP politicians, and that independent mass movements need to be built to challenge the far right.

The Supreme Court ruling in Planned Parenthood v. Casey opened the door for states to pass insidious laws to restrict abortion access. When laws passed under Casey have been challenged, the Fifth Circuit Court has struggled to interpret consistently whether individual provisions cause an “undue burden” to women’s health. As a recent article in The Atlantic states, “‘undue burden’ is distinctly and bizarrely vague,” effectively providing legal cover for hundreds of right-wing restrictions on access to abortion (11/15/2015).

As a result, and most clearly across the South, working-class women often face insurmountable barriers to healthy abortions. The American Medical Association has broadly called these restrictions medically unnecessary. These restrictions range from mandating extremely long wait periods to prevent women from “making a decision she will regret” to requiring that doctors have admitting privileges to local hospitals to, in the case of HB2’s second provision now under discussion, forcing providers to take on cost-prohibitive construction to make clinics “ambulatory surgical compliant” – that is, to widen doorways.

Before law HB2 began to take effect, Texas had 41 clinics providing safe abortions. Today, there are 18. If the justices take a broad interpretation of the law, this could mean immediately closing 20 clinics across seven states, including reducing the number in Texas to 9 or 10 – to meet the needs of 5.4 million women of reproductive age.

“I don’t think it’s overstating the case to say if the court upholds the restrictions based on the justifications each state is offering – that these are health protective – that it would result in the most drastic reduction of the availability of abortion at any point since Roe v. Wade,” Priscilla Smith, director of Yale Law School’s reproductive justice program, said last week (The Guardian, 11/13/15).

The Supreme Court is scheduled to announce its decision in June 2016, as the  presidential campaign kicks into high gear. The Republican establishment will use attacks on women as a drum-beat in the elections to galvanize the religious right. The right-wing populism seen in Ben Carson and Donald Trump’s sexist and racist remarks carries with it the very dangerous possibility of emboldening extreme right-wing elements like Robert Dear, the mass shooter who terrorized the Colorado Springs Planned Parenthood clinic.

Republicans are clearly the main enemy in the battle for reproductive rights, but the Democrats will not build the mass movement necessary to defeat attacks on women. For example, Roe v. Wade passed in 1973 during a period of enormous social unrest when the U.S. ruling elite was being challenged on many fronts. Campus activism was at its height, and the country was rocked by massive actions for women’s rights, anti-war protests to pull out of Vietnam, and the black liberation movement. Regardless of their rhetorical support for women’s rights, the Democratic Party establishment’s legalistic and defensive approach is no substitute for a fighting, working-class-centered women’s movement. Historically, mass struggle has been the only vehicle to achieve victories for gender and racial justice.

Instead of allowing the right wing to continuously frame the debate, cynically using women’s bodies as a get-out-the-vote tool, progressive forces must go on the offensive. The labor movement, representing millions of women, has a critical role to play in the struggle and faces its own SCOTUS challenge in the case of Friedrichs v. California Teachers Association. The Friedrichs ruling could make “right to work” national, which would be a huge blow to organized labor and the millions of women workers who’ve fought for and achieved better wages, health care, and workplace rights in the public sector through organizing.

If the labor movement took mass action in protest of Cole and Friedrichs, throwing their full weight against the right wing and their sexist, racist, anti-worker attacks, they could pave the way to a stronger workers’ movement standing for genuine race and gender equality. To win, we must link the fight for women’s rights with the fight for a $15 minimum wage and union representation, forge ties with Black Lives Matter, and mobilize the millions needed in struggle to defeat the right wing.

Furthermore, building an independent political alternative to the two parties, one that fights capitalism’s oppression of women with a single-payer health care system and safe access to abortion, is the only way to ensure reproductive rights for all.