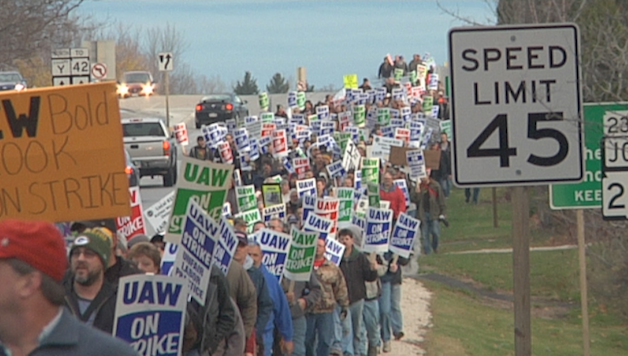 As we go to press, a settlement of the Kohler strike has been announced which was rapidly ratified by UAW members by a large majority. It appears that the deal includes significant wage gains but does not eliminate the tier system. However, it is certainly more than the workers would have achieved without a solid, well-organized strike.

Kohler, Wisconsin, is a quintessential company town. The entire village was built around the Kohler plant, which manufactures kitchen and bath products such as faucets and iron casting. In November, workers at United Auto Workers (UAW) Local 833 voted overwhelmingly, at 94%, in support of striking against the company’s proposal of higher insurance costs and continuation of the two-tier wage system. CEO Dave Kohler threatened, “If the two-tier wage structure disappears, so do the local manufacturing jobs.” But union leadership stated they are “not falling for that again.”

During the 2010 recession, the Kohler manufacturing plant laid off 600 workers and threatened to lay off more if the union didn’t accept a five-year contract which froze wages, increased health insurance costs, and established a tier system that pays newer employees nearly 50-60% of what their longer-tenured coworkers make. The Kohler family is ranked 65th in Forbes 400 list; from 2012-2013, their wealth doubled. Recently, the company has been back on the upswing, and the workers took note of the growth, hoping for a fair contract last November, but they were disappointed to find that the company would simply continue the same nasty contract with a few crumbs thrown in to sweeten the deal.

The Kohler strike is an open-ended, large-scale, production-stopping strike in an era where strikes have increasingly been limited to one-day events. The strike began with mass picketing and disruption of traffic that lasted several days. And the picket line as a whole has held strong for over a month. In a union with 2,100 members, only 23 workers have crossed the picket line. Work stoppage strikes like this one have become rare in the recent past, with only 11 in the last decade.

There is overwhelming support for the strike, both in the community and in the broader labor movement. When the tier system was first established in 2010, the workers were isolated, but the mood has shifted dramatically since then. Unions across the country have demonstrated solidarity and collected donations for the strike fund. Community members participated in the mass picket.

In the recent period, Wisconsin has been a laboratory for right-wing union-busting experiments, with the crushing of the public sector unions in 2011 and the passage of “right to work” legislation in 2015. In the face of these attacks, many have wondered how the labor movement can survive. The Kohler strike harkens back to the sort of struggles that built the labor movement in the first place. This points to the significance of the strike, not only for the Kohler workers themselves, but for the entire labor movement.