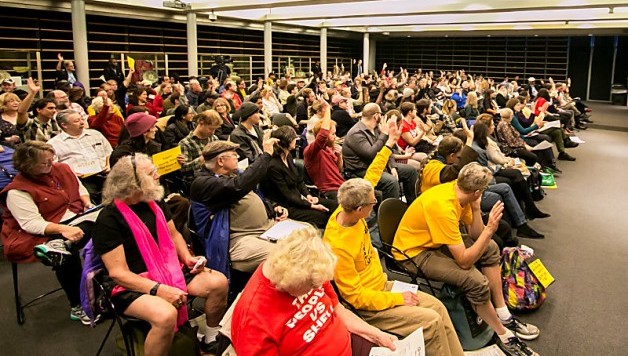 I know I have learned so much over the last two years of working on Kshama Sawant’s campaigns. The campaign when she got elected, winning more than 90,000 votes in 2013; the 15 Now movement we built afterwards in every corner of the city; and now the powerful re-election campaign.

As the volunteer coordinator I have watched people come out for their first session of door knocking because they are excited about what Kshama stands for, and end up being part of our much bigger efforts to fundamentally change how things are run in this society. It will take millions on the streets, and it will take thousands of activists for that to happen. Fighting to build grassroots campaigns and an independent working class political challenge in Seattle has been a fantastic way to learn how to fight for bigger change. And it all starts with encouraging and engaging working class people.

People get involved in something if they feel like it is relevant to their lives – and that it is worth it. Housing affordability is the key question today in Seattle. We aren’t trying to get Kshama re-elected because she is a nice person and will listen to people (she is nice and does listen, but that’s not the point). We want her re-elected to fight for real change that improves working people’s lives. We want her re-elected to create a platform for movements and to amplify the voices of those in struggles.

The other reason people get involved in something is if they feel like they can actually make a difference. People are busy just trying to make it day to day; why should they sacrifice their precious free time unless it will yield results? Can we actually win $15? Can we get a socialist elected? Can we win rent control? That’s exactly why the corporate media (The Seattle Times, in this case) spends so much time and energy saying that is isn’t possible. They said you couldn’t get elected if you don’t take corporate money, if you run outside the Democratic Party. They said $15 was impossible.

But when Kshama ran for the city council two years ago, it was centered on the call for a $15/hour minimum wage. The corporate media said it was impossible, it wasn’t reasonable, and if it did happen it would ruin the economy. They launched attack after attack in the media to scare people away. We responded to the attacks at the doors, convincing people that they are worth more than $15/hour, that it’s actually better for the local economy when people have money to spend, and that we COULD win it – if they got involved.

When Kshama was elected, that was a referendum on the idea of raising the minimum wage. So to build off of that momentum, we launched 15 Now to get people involved. There were action groups across the city meeting, leafleting, organizing protests, etc.

As a result of the mass pressure we created and with the help of key unions, we won a huge victory for working people. 100,000 people in Seattle will benefit from the $15 minimum wage. The first step was achieved this past April. On January 1 the next step will kick in with workers at McDonalds (and many others!) going to $13 before reaching $15 per hour a year later.

In the course of the last two years, we showed working people that through struggle and grassroots organizing we actually can win.

And when they now say rent control isn’t possible, it does not sound very convincing any more. Let’s keep proving them wrong.

Which Side Are You On?

Our political starting point is simple: You can’t represent big business and working people at the same time. It’s always a choice. Big business, the real-estate developers, etc are all profiting off of the status quo. They are happy with the way things are.

We need candidates and elected officials who clearly take sides as Kshama does: Unapologetically defending working families’ interests – that’s what it is about.

That’s why Kshama did not and will not accept a dime of corporate cash and why she only takes an average worker’s wage in Seattle of $40,000, donating the rest of her $120,000 salary to supporting the struggles of working people.

We win by getting as many people as possible involved. And when we say “involved” we mean the full spectrum: doorknocking, talking to neighbors, calling people, agitating your family and bringing your friends with you. Only if working class people themselves are the backbone of such campaigns can we build the type of force that can win fundamental change.

Socialists of course don’t think that getting one person elected is the answer to all the crises we are facing – income inequality, environmental destruction, structural racism and sexism and homophobia. The real engine for achieving the fundamental change we need is mass movements linked to a new mass political force with a socialist program representing the interests of the 99%.

And yet, it has been invaluable having Kshama to argue our case in the City Council and use the resources of her office to help working people.

We organized an affordable housing town hall. We filled City Hall, and the overflow room, and the overflow for the overflow room. 600 people showed up to talk about their experiences with rent increases of 50%, of 100%. We organized a debate about rent control with Kshama and Councilmember Nick Licata taking on a Republican and a realtor lobbyist – and 1,000 people showed up. Kshama and Socialist Alternative brought things to the open, opened up City Hall and activated people.

When the Seattle teachers went on strike, we were there, every morning at the picket lines. This was our chance to connect to thousands of educators all over Seattle in the effort to fund education and argue for our program of making the rich and the developers pay for the needs of the wast majority.

From launching the movement to win $15 to bringing thousands together in town halls to give voice to the mass anger at the lack affordable housing and forcing a citywide debate around rent control; to pushing back against violence directed at LGBTQ people and winning Indigenous People’s Day, Kshama and our grassroots organizing have made a serious difference.

That’s why we need to defend Kshama’s seat – but that’s why our campaign will not stop here. This is just the beginning.

Bernie Sanders and the End of Neoliberalism