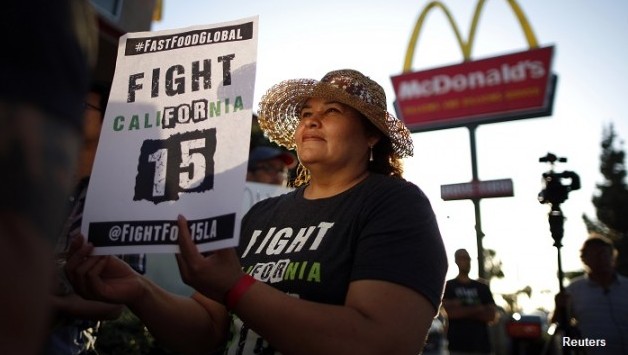 Working people across the U.S. are facing a low pay epidemic. While the cost of living continues to rise, real hourly wages have largely stayed the same or declined over the past decade. According to recent studies from the National Employment Law Project, the lowest paid professions in the United States have faced enormous wage declines over the past five years. Home health aides, food preparation workers, and janitors have seen their real hourly wages drop by nearly ten percent!

A growing number of people are juggling multiple jobs and longer hours, yet they are worse off than before. Even though less than a quarter of the jobs lost during the Great Recession were low-wage, more than half of the new jobs created between 2010 and 2012 are low-wage.

Since 2012, there has been a series of nationally coordinated low-wage worker strikes and days of action to fight for $15 an hour and a union. The movement gained significant strength in Seattle, where Socialist Alternative candidate Kshama Sawant was elected at the end of 2013  on a bold platform that included a $15 an hour minimum wage.

Seven months later, the battle for a $15 minimum wage was won in Seattle and, since then, the fight for $15 has made enormous steps forward throughout the country. Other major cities, such as San Francisco and Los Angeles, have also won a $15 an hour minimum wage. But while we have had a huge impact on the lives of hundreds of thousands of workers and on the national political discussion, we have only begun to make a dent in the national epidemic of low pay.

Polls show 63% of the public now supports a $15 an hour minimum wage. This is forcing some Democratic Party politicians to voice support for the demand. The Democratic National Committee recently added a point in their platform calling for $15, although they’ve made it clear that their elected officials are under no obligation to support this in practice.

To make further gains, it’s crucial to remember how things went down in Seattle. After being elected, instead of making backroom deals with the corporate establishment, Sawant used her position as a city councilmember to launch and build 15 Now, a grassroots movement to fight for $15, which a number of unions supported. It was this strong movement of workers and socialists that put $15 on the agenda and secured its victory. On the other hand, the Democratic Party politicians, who opposed $15 just months before, then relentlessly tried to water it down through big-business-backed amendments.

The election of one socialist to the Seattle City Council, linked to building a tremendous grassroots movement, was able to raise the minimum wage to $15 an hour in less than a year. Imagine what could be possible if independent, pro-working class candidates were elected throughout the country, alongside a sustained movement to fight for $15 an hour, union rights, single-payer health care, free higher education, and other transformative demands.