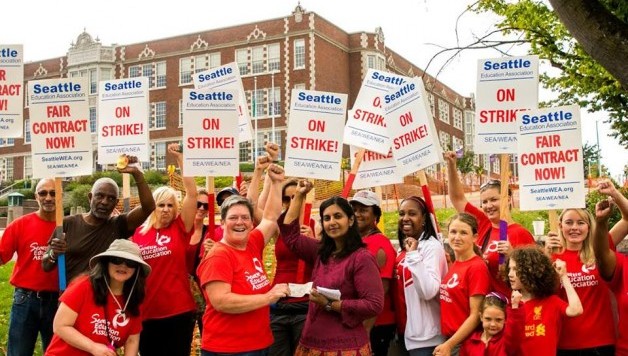 After months of fruitless negotiations with the Seattle Public Schools District, Seattle teachers and support staff in the Seattle Education Association (SEA) unanimously voted to strike.  On the morning of the first day of the strike, Socialist Alternative members and volunteers with the Kshama Sawant re-election campaign joined picket lines at 9 schools in a show of solidarity, and to talk with members about what it meant to them to participate in a strike, what demands must be met for a fair contract, and how it could be won. All across Seattle, educators we talked to expressed anger at the district for having the audacity to ignore their demands. SEA members said enough is enough, that the district has given them no other choice but to strike. Many members said they were proud to stand unified and show the district that they are organized and prepared to fight for a fair contract.

Most educators said all demands should be met, though classroom size, too much standardized testing, and asking them to work longer days without compensation were some of the main issues they said were most important. A number of members commented on how we’re supposed to be in a recovery, yet the district is still offering “recession contracts.” In discussions on what will be needed to win a fair contract, some members seemed eager to use social media, leaflet distribution, and other means to reach out to the community and build support for the strike. Indeed, this was important to the successful MAP boycott in 2013, and the Chicago Teachers Union strike in 2012.  (Socialist Alternative member, teacher, and SEA member Matt Maley writes about what it will take to win here.)

Everyone was excited to hear about the community forum organized by Socialist Alternative City Councilmember Sawant. The forum will be held in City Council Chambers at Seattle City Hall, Thursday, September 10 from 6 – 7:30PM. It’s clear a mass outreach campaign is needed to help answer the attacks from the Seattle Times and other news outlets that unfairly portray the educators demands as unreasonable. We urge all our supporters of Socialist Alternative and Councilmember Sawant to support SEA. Their fight is our fight. Join a picket line in your neighborhood, bring snacks, drinks, and energy, even for a few minutes. It’s important to show SEA members that the community stands with them.