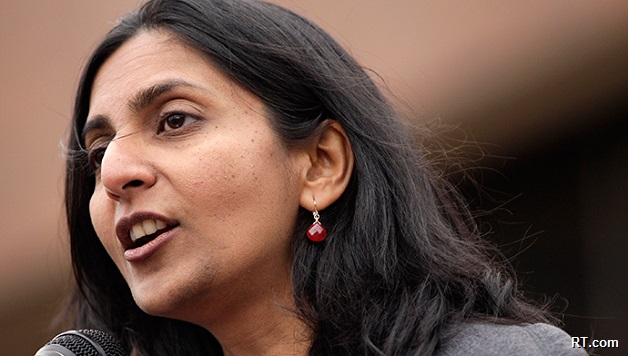 Keep the Voice for Working People on the City Council!

Socialist Alternative City Councilmember Kshama Sawant won more than 52 percent of Seattle’s District 3 August primary vote, putting her in a strong position to be re-elected this fall. However, the corporate establishment will step up its efforts to silence the voice of the 99% in Seattle. Without a concerted grassroots effort, it is by no means guaranteed that we will win.

Clearly, Kshama has support among ordinary people. In her first six months in office, she helped win the highest minimum wage in the country, working alongside unions and helping to build the 15 Now grassroots movement. The $15 an hour victory has since rapidly spread across the country.

Kshama also led a series of other fights, including the struggle for affordable housing. In July, 1,000 people packed a town hall meeting to hear Kshama and Councilmember Nick Licata debate rent control with a developer lobbyist and a Republian state representative.

The voter turnout in Kshama’s district was six percent higher than the citywide average, showing how her efforts have engaged and brought ordinary people into politics. We built a grassroots campaign with 600 volunteers. We knocked on 30,000 doors and raised more than $270,000 – without taking a dime from corporations or big business.

Elections are a difficult terrain for the struggle of working people, as the establishment has many tools it can use: money, media, personal attacks, rumors, lies, etc. Kshama’s supporters everywhere should be prepared for a challenging general election campaign. The establishment wants to erase and tarnish the example we are setting.

Our opposition already has significant backing from corporations and developers. Just for the primary, more than $100,000 was donated in max donations from corporate executives to our opponent Pamela Banks. She will get loads more, and this will be the most expensive city council campaign in Seattle’s history (RunfortheMoney.org).

To get their candidates through the primary, developers and big business groups laid out more than $200,000 in independent expenditures, citywide. But, knowing Banks would get through, they did not unleash their full power on the District 3 race. They will now. To counter that, please donate today and get involved.

Meanwhile, the corporate media will use their influence against Kshama. The morning after the primary, The Seattle Times published their third op-ed in two weeks attacking rent control. The piece began with a directive: “Seattle City Councilmembers and candidates should stop talking about rent control.” No worries – Kshama will not be silenced that easily.

The corporate establishment’s echo chamber has worked hard to portray Kshama as “divisive.” This is The Seattle Star‘s answer to this: “As for the absurd allegation by rabid Kshama-bashers that Sawant is ‘divisive’: oh, bish-bosh. Sawant’s not the one who created the current gaping divide between Seattle’s haves and our have-nots — she’s among the ones currently trying to solve that problem. Vote Sawant” (13 July 2015).

While Kshama has opened the council doors wide open to working people, they spread claims that she is not “accessible.” There is no other councilmember who organized more town halls that engaged hundreds of people in discussion about affordable housing, hate crimes against the LGBTQ community, a people’s budget, and so much more.

They say she is just one vote and can’t get things done, ignoring the unanimous votes Kshama won, including the minimum wage, Indigenous People’s Day, and millions in new city funding for the homeless, city workers’ wages, and a women’s shelter.

The attacks that are inevitably coming will have an effect on voters, particularly those who are not very engaged and not well informed. By no means can we be complacent. We will need to continue building our grassroots army of volunteers, knocking on tens of thousands of doors to counter the attacks, and spreading our message: “Make Seattle Affordable For All.”

Ensuring Kshama’s victory is important, not just for District 3, but for working people across the country. If she is re-elected as a socialist, without corporate cash, it will help raise the confidence of progressives across the country, and it will help speed up the process of building a new party for the 99%.

To win, we urgently need all the support you can give. Donate and volunteer today. Join Socialist Alternative and help us fight for an end to the rule of the billionaire class.