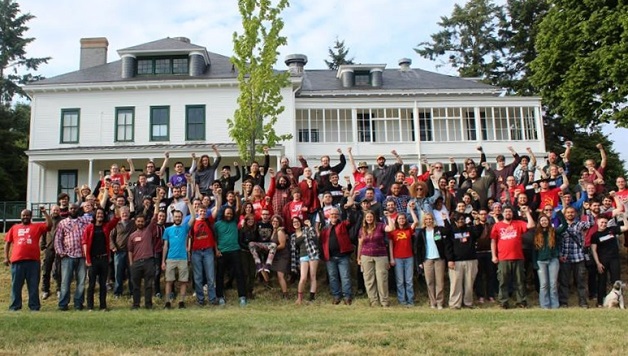 This Memorial Day weekend, 200 socialist activists from across the country gathered at Fort Worden State Park in Washington State for the 2nd national summer camp of Socialist Alternative. With people coming from 24 different cities for a weekend of lively discussion, debate, and good times, the energy level was through the roof. For the third time in a row, this national gathering was the largest in the history of Socialist Alternative!

The camp started off Friday night with a rally featuring organizers from around the country talking about the inspiring work being done in their areas and the massive opening for socialist politics that lies in front of us. Throughout the rest of the camp there were large plenary sessions on World and U.S. Perspectives, the Bernie Sanders Campaign, Fighting Racism Today and the Black Lives Matter Movement, and Leon Trotsky’s Legacy and Ideas. There were also workshops, ranging from historical topics (ex: Lessons from the Spanish Civil War), to theoretical topics (ex: Role of the Capitalist State), to international issues (ex: Greece: Syriza at a Crossroads), to U.S. perspectives for struggle (ex: Child Care: A Class and Women’s Issue), to party building skill shares (ex: Giving Speeches).

Two of the most looked-forward-to discussions at the camp were the large plenary sessions on Bernie Sanders and Black Lives Matter. Bernie Sanders’ campaign continues to pick up steam and gain support – he is currently polling at 15% after being at just 8% in April – and as revolutionary socialists we must decide how we will engage in his campaign. Currently a hotly debated topic among the left, this discussion was extended to a full three hours in order to leave ample time for questions, discussion, and debate.  There was general agreement that engaging with Bernie Sanders’ supporters will be necessary for movement building and furthering the cause of building a mass workers’ party free from corporate influence.

For other large plenary sessions, such as Black Lives Matter, discussion took place in small breakout groups so as to encourage and allow everybody the chance to contribute.  Socialist Alternative strives to have the most engaged and active membership possible, something that has been key to our successes in the period since the last national summer camp, during which we have nearly tripled in size.

Of course socialists can have fun too, so Saturday night there was a talent show featuring everything from spoken word storytelling, to skillful dancing (and less skillful dancing), to jazz saxophone. Naturally, the evening culminated in a massive, spontaneous dance party.

As is the case at any gathering of Socialist Alternative members, one of the most productive and enjoyable parts of the camp were the informal discussions which took place at mealtimes, during breaks, and at the end-of-the-day socials. Having the opportunity to exchange ideas and experiences, two central and inseparable guiding tools for Marxists, with socialist organizers from around the country is truly invaluable.

As Socialist Alternative continues to grow and have an increasingly greater impact on current movements, it is imperative that we remain a well-resourced organization.  Unfortunately, it is going to require quite a bit of money to take down capitalism. But continuing on our record-setting trend, following a tear-jerking speech by a young Seattle organizer, we raised more than $65,000 to fund the work of Socialist Alternative in the coming period!

We have ambitious goals; we do not deny that. As socialists, we strive for nothing short of a socialist transformation of society. We believe in the possibility of a better world, free from poverty and all forms of oppression. These can seem like grand aspirations, and indeed they are, but weekends like the National Summer Camp help to both politically and organizationally prepare us to successfully build local campaigns for $15, to challenge racism and sexism; and, crucially, to connect these struggles to the historical task of the working class to end the exploitative system of capitalism and build a socialist society.

Coming out of the camp, Socialist Alternative is armed with the excitement, ideas, and solidarity necessary to continue to take the socialist movement to the next level!

Join Socialist Alternative and get involved in the socialist movement today!