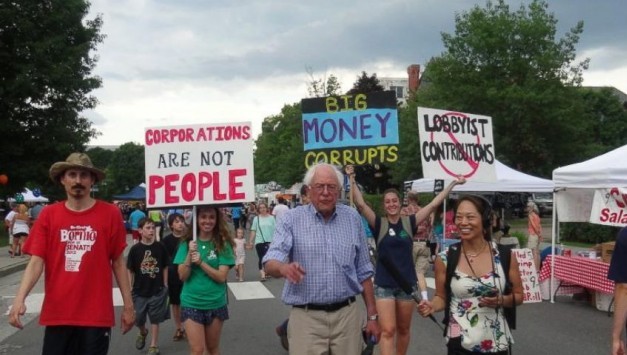 Promising a “political revolution” against the “billionaires and oligarchs” who have hijacked the political system, Vermont Senator Bernie Sanders has launched a campaign for the Democratic Party presidential nomination. There was a huge response to the announcement, with 75,000 people donating $3 million to his campaign within four days. “People for Bernie” meetings have been held around the country.

Socialist Alternative and many others on the left have urged Sanders – who describes himself as a democratic socialist – to run as an independent in order to clearly challenge both corporate parties. Unfortunately, he has chosen to run in the Democratic primaries.

How should socialists respond to Sanders’ campaign? What is the best way to galvanize the radicalizing forces in U.S. society? These issues have provoked a significant debate on the left. Socialist Alternative asked Todd Chretien from the International Socialist Organization (ISO) to present that organization’s view alongside Philip Locker, who summarizes Socialist Alternative’s position.

Bernie Sanders’ campaign will stand out from the status quo of U.S. politics. He has promised to support a trillion-dollar green jobs program for renewable energy. He defends Social Security and advocates for a single-payer health system. Faced with an intramural battle between the Clinton and Bush wings of the 1 Percent, he calls for a “political revolution.” On top of that, he identifies himself as a socialist and says his hero is Eugene V. Debs. It’s no wonder many people on the left are excited.

But there’s one way that Sanders’ campaign doesn’t stand out, and it’s decisive for socialists. He is running for the Democratic Party presidential nomination, and he has ruled out in advance an independent campaign in 2016. “No matter what I do,” he said in January, “I will not be a spoiler. I will not play that role in helping to elect some right-wing Republican as president of the United States.”

On this point, we should take Sanders at his word. He promises to confine his “political revolution” to the role of loyal opposition within the Democratic Party, and to support Hillary Clinton if she rides her billion-dollar campaign to the nomination.

As Bruce Dixon, former Black Panther and Georgia Green Party chair, put it, Sanders will serve as a “sheepdog” for the Democratic Party – his bark may cause a stir, but his job is to bring discontented voters back into the Democratic flock.

This was the result of Dennis Kucinich’s primary campaigns in the 2000s and Jesse Jackson’s Rainbow Coalition runs in the 1980s. The hopes of some on the left that, for example, the Rainbow Coalition would break with the Democrats were dashed when Jackson did exactly what Sanders is promising to do in 2016 – endorse the mainstream Democrat who gets the nomination.

As a U.S. senator, Sanders calls himself an independent, not a Democrat – but his record should lead socialists to question that label. He caucuses with the Senate Democrats, and left-wing activists in Sanders’ home state of Vermont are critical of his support for Democrats like budget-cutting Vermont Governor Peter Shumlin.

And, like the increasingly neoliberal social democratic and labor parties in Europe on which Sanders models his socialism, he takes positions on critical questions that aren’t radical at all. He voted for the Authorization for Use of Military Force after 9/11 and, more recently, refused to vote against a Senate resolution supporting Israel’s 2014 massacre in Gaza. Asked about the mass protests in Baltimore after the police murder of Freddie Gray, Sanders said that “being a cop is a hard job” before backing tame policy proposals that were no more radical than Hillary Clinton’s.

Sanders’ announcement comes amid widespread political discontent and the spread of young movements such as Black Lives Matter; Fight for 15; the Boycott, Divestment and Sanctions Movement in solidarity with Palestine; and more. Socialists have a responsibility to discuss the real record of the Democrat Party, including its liberal wing, with these new movements. We can’t shy away from the hard lessons of past attempts to reform the Democrats.

Does that mean we are stuck on the sidelines? Not at all. The Sanders campaign gives us an opportunity to debate socialist politics. If Sanders wants to bring movement and union activists into the Democratic Party through its left entrance, we should try to get them back out that door and into the streets. We can engage on political issues with People for Bernie groups and encourage them to take part in activism outside the electoral arena. And since Sanders’ version of “revolution” doesn’t challenge the boundaries of one of the richest capitalist parties in the world, we can introduce Debs’ socialism to a new generation as an alternative.

What socialists should not do is follow Sanders into the Democratic Party and organize for his primary campaign, even on a temporary basis. History teaches us that this will make it harder, not easier, to build an independent left-wing alternative to the two-party system.

As Kshama Sawant in Seattle and Howie Hawkins and Brian Jones in New York demonstrated with their independent campaigns, we don’t have to wait to begin building that alternative. We can begin our discussion with Sanders supporters by stressing our common aims for radical change – but we have to tell it to them straight: To win that change, the left can’t follow Sanders into a corporate party, but must help organize the new movements while building an independent political challenge outside the Democratic Party.

Bernie Sanders’ campaign has a fundamental built-in contradiction. On the one side, it stands out as a credible national presidential campaign, giving voice to the seething anger against inequality and the war on working people. Despite significant shortcomings – for example, his failure to speak out clearly in support of the Black Lives Matter movement and his support for key aspects of U.S. foreign policy – his platform has the potential to mobilize hundreds of thousands against corporate politics.

On the other side, Sanders has decided not to run independently, as we have consistently argued he should. Limiting his campaign to the corporate-dominated Democratic Party primaries – that he will not win – is a dead end for building the kind of powerful grassroots movement that is needed. Calling on people to mobilize against Wall Street and at the same time saying you will support the eventual corporate-endorsed Democratic nominee is like trying to start a fire and announcing your intention to pour water on it as soon as it really heats up.

A Battle Not to Miss

But Sanders’ inspiration of hundreds of thousands could lay the basis – and provide the experience – for many people to leave the orbit of the Democratic Party. Socialists can play a key role in this process by intervening in a skillful but determined way.

For those moving into action around Sanders’ campaign, we can provide the link to building mass movements and structures independent of the Democratic Party. We can make the case for a real challenge, arguing that Sanders should run all the way to November 2016 as an independent and, if he doesn’t, striving to involve those attracted by Sanders’ policies to support the strongest independent left campaign in the 2016 presidential election.

Some of Sanders’ supporters have a conscious strategy of working within the Democratic Party. But the majority are looking for a political alternative to big-business politics.

If Sanders endorses the pro-business Democratic nominee, as is most likely, there will be a section of his supporters who will want to continue fighting and will split off to support the strongest independent left candidate for president. In 2004, when Dennis Kucinich and Howard Dean endorsed the Democratic nominee, John Kerry, an important minority of their supporters ended up joining Ralph Nader’s independent campaign.

Socialist Alternative will, at each stage, politically explain the role of the Democratic Party as a big-business party and argue for building a movement that can create a real alternative for working-class people. We will not help to sign people up for the Democratic Party. Instead, we will work with those drawn to Sanders’ campaign to fight for $15, for single-payer health care, and to take on the billionaire class.

Sanders’ campaign will be an arena for debate on the role of the Democratic Party. Sanders believes his platform is compatible with working within the Democrats. We disagree. Many energized by Sanders have not yet thought this through fully but are, instead, pragmatically looking to find a way to fight back. But the experience of Sanders’ campaign could be part of the process of clarifying, for tens of thousands, the necessity of building a completely new political force for working people, especially if socialists are actively involved.

The real mistake for those who want to build an alternative to corporate politics is to abstain, to simply criticize from the sidelines. If we are absent from the Sanders campaign, the concrete effect will be to help facilitate the corralling of Sanders’ left-wing supporters behind the eventual Democratic nominee.

We need a correct political understanding and critique of Bernie Sanders’ politics. But we also need to actively engage with the genuine workers and youth being drawn to Sanders’ campaign by his fierce denunciations of the political establishment. Socialists need to go through this experience with them, helping to speed up the process of drawing the conclusion that an independent political alternative to the Democrats is needed.