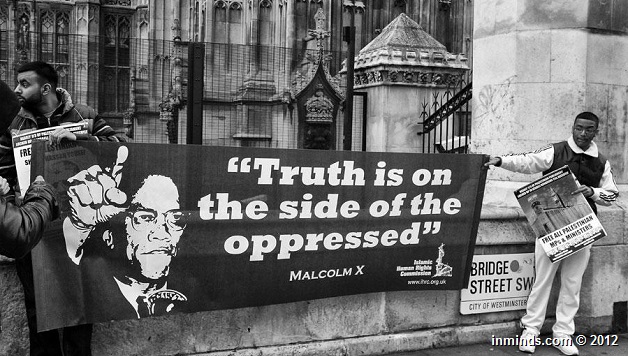 50 Years After His Assassination

“The centerpiece of Malcolm’s political project was to internationalize the condition of Black peoples in the United States.”

February 21 marks the 50th anniversary of the public assassination of El Hajj Malik El Shabazz or Malcolm X. In the shadow of the nationwide revolt against endemic police violence, economic exploitation and social alienation, the embryo of a new movement led by youth of color is upon us under the banner #Black Lives Matter. Malcolm X remains a towering figure in the pantheon of the 20th century revolutionaries who sought to end the systems of oppression and degradation. This generation is engaged in a struggle to define and preserve their humanity in the face of cold-blooded indifference to their suffering under capitalism and racism. Let us examine the final 11 months of Malcolm’s life and legacy.

The Evolution of a Revolutionary

On March 8, 1964, following a 90 day exile, Malcolm X was indefinitely suspended from the Nation of Islam (NOI) following  his “chickens come home to roost” statement after the death of John F. Kennedy in November 1963. Malcolm X decided to make an announcement he was leaving the NOI and spiritual teacher Elijah Muhammad to fully engage in the struggle for civil and human rights at home and abroad. Malcolm would form Muslim Mosque Inc. for NOI members who followed him to continue the practice of black American-based Islam. In June, The Organization of Afro-American Unity, modeled on The Organization of African Unity created in the aftermath of successful anti-colonial struggles in the Third World, became the developing the political arm allowing him to fully participate in the Civil Rights Movement.

The development of Islam in the U.S. dates back to the Trans-Atlantic slave trade, the growth of Islam during slavery, the rise of Black Nationalism in the mid-1800s, the teachings of Pan-Africanism father Edward Wilmot Blyden and black urban Islamist sects like the Noble Drew Ali’s Moorish Science Temple of America. In addition, there was the decline of the Marcus Garvey movement and his Universal Negro Improvement Association (UNIA), which was the largest black-led movement where Malcolm’s parents were active members. In the early 20th century, the Garvey movement, along with the socialist and anarchist, were crushed by the federal government’s Palmer raids, where the notorious and future director of the FBI J. Edgar Hoover was a young agent at the time. The Garvey movement was comprised of cultural nationalism and black capitalism. Many former Garvey followers became attracted to the Lost-Found Nation of Islam under the leadership of W.D. Fard and, eventually, Elijah Poole, who would later become Elijah Muhammad.

The Nation of Islam spoke out against the hypocrisy of American democracy, capitalism, white supremacy and the horrid conditions faced by black people since slavery. Drawing their membership from the urban black working class, the poor, prisoners and semi-employed, NOI preached and practiced a combination of cultural black nationalism and pro-capitalist ideals. NOI was a top-down leadership, including a paramilitary wing called The Fruit of Islam. Theologically, NOI preached black people are the “chosen people” to be delivered from the evils of white supremacy and Jim Crow and to form a global connection with people of color in Asia, Africa, Middle East and Latin America. The NOI distinct form of black American-based Islam was not recognized by mainstream Sunni Islam. The NOI had a non-engagement policy concerning the most important social movement of the time—the Civil Rights Movement.

NOI and Elijah Muhammad feared government attack on the organization. Elijah Muhammad was arrested in 1934 when he refused to transfer his children from the movement’s school, the University of Islam, to a public school. Tried in Detroit, he was found guilty of contributing to the delinquency of a minor and placed on six months’ probation. Meanwhile, earth-shaking events were taking place globally with revolutions, counter-revolutions, rebellions and the Civil Rights Movement. Malcolm’s political and spiritual stirrings for a fuller engagement in the struggle was palpable. As the national spokesman of the NOI, Malcolm was politicizing the theology of Elijah Muhammad to the dismay and anger of the leadership of the NOI.

After splitting from the NOI on March 8, 1964, Malcolm began what would be two expansive trips internationally to Africa, Middle East and Europe. It had religious and political objectives, as Malcolm sought to complete the Hajj to Mecca and formally accept the teachings of Sunni Islam. Malcolm aimed to become a point of reference in the United States for Islam theologically and organizationally. Malcolm’s trips throughout the Middle East and Africa had a huge effect on his thinking on Islam. Malcolm believed spiritual and political Islam could play a role in the liberation struggle against racism and white supremacy. Malcolm exclaimed, “Our success in America will involve two circles, black nationalism and Islam… And Islam will link us spiritually to Africa, Arabia and Asia,” (Manning Marable, Malcolm X, A Life of Reinvention, p. 311-12.)

Politically, Malcolm aimed to bring the case of 22 million Afro-Americans, who faced Jim Crow America of poverty, police violence and political disenfranchisement, to a world stage like the work of Paul Robeson, Max Yergan, Alphaeus Hunton, Dr. W.E.B. DuBois and countless others with trailblazing organizations like the Council on African Affairs (CAA) in the 1940s and early 1950s.

Malcolm navigated through a world situation after World War II and witnessed a period of revolution and counter-revolution. The revolutions in the colonial world like in China, Algeria, Vietnam, Cuba, the murder of Congolese Prime Minister Patrice Lumumba in 1961 and the Non-Aligned Movement produced the influential Bandung Conference of 1955 had a profound effect on Malcolm’s political worldview. The anti-colonial revolutions punctuated the decline of European colonial power at home and abroad. At the same time, the emergence of the United States as the preeminent capitalist superpower, the strengthening of social democracy in Western Europe, and the spread of Stalinism in Eastern Europe provided the backdrop to Malcolm’s evolving ideas over the span of 11 months. At home, the black freedom movement under the phase of the Civil Rights Movement began in 1955 following the brutal murder of Emmett Till and Rosa Parks’s defiant refusal to get up from a Montgomery bus seat. It ignited a powerful social movement against slavery by another name—Jim Crow.

President Harry Truman’s anti-communist doctrine of 1947, Senator Joe McCarthy’s witch hunts as well as Cold War liberalism at home and abroad had a devastating effect on the radical black freedom movement, its leading left activists and radical leaders. As Professor Penny M. Von Eschen writes in Race Against Empire: Black Americans and Anti-Colonialism, 1937-1957, “The embrace of Cold War American foreign policy by many African American liberals as well as U.S. government prosecution of activists such as Robeson and the CAA, fundamentally altered the terms of anti-colonialism and effectively severed the black American struggle for civil rights from the issues of anti-colonialism and racism abroad” (p 3).

The rise of a reformist, liberal and church-based leadership under organizations like the National Association for the Advancement of Colored People (NAACP) and Southern Christian Leadership Council (SCLC) would lead the Civil Rights Movement with its non-violent civil disobedience tactics and struggle for political and social reforms from US big business and its two parties—Democrat and Republican—during the post-World War II economic upswing became the dominant force in the struggle for freedom. Due to militant social struggle by the movement, the liberal political and economic elite believed capitalism could address poverty, racism and endemic oppression. Lyndon B. Johnson’s administration was forced to implement key social programs under the War on Poverty program and passage of the Civil Rights Act of 1964 and Voting Rights Act of 1965.

The work of Malcolm in mid-1960s was a continuum of his third world analysis developed during his time in NOI. This was epitomized by Malcolm’s meeting with Fidel Castro in Harlem in 1960. Malcolm highlighted the limitations of liberalism under Johnson, which would become evident after the full involvement of the US imperialism in Vietnam economically and militarily, the role of the two-party system, particularly the Democratic Party as the dead-end of all social movements, and entrenched white supremacy. Malcolm X challenged the hypocrisy of American democracy in the face of the social explosions gripping a number of cities like Harlem and violent repression of civil rights workers like the murder of James Earl Chaney, Andrew Goodman and Michael “Mickey” Schwerner in July 1964.

Malcolm’s advocacy of the right to armed self-defense in the face of racist, vigilante and state-sponsored violence in black communities provided a counter-balance to non-violent ideology and tactics advanced by Dr. King and the leadership of the Civil Rights Movement. His call for such tactics was a continuation of the work of former North Carolina NAACP leader Robert F. Williams and utilized by black community members and activists like the Deacons for Defense under siege by domestic terrorism. His analysis and acknowledgement of terror inflicted on black workers and youth throughout Jim Crow laid the basis for the development of the Black Panther Party and Black Power activists.

Malcolm sought to re-create the threads of the struggle in the U.S. for civil rights to an internationalist, anti-capitalist and anti-imperialist framework. This united the most oppressed and youth in the third world as well as U.S. and total liberation from the power structure of daily oppression and exploitation.

His campaign to take the U.S. to the United Nations and charge it with crimes against Afro-Americans human rights was crucial to place the struggle on a world stage and echoed the work of Paul Robeson, Dr. W.E.B. DuBois and communist party member William Paterson “We Charge Genocide” petition presented to the U.N. in 1951. The international ruling elite, U.S. governmental forces and NOI members wanted Malcolm dead because of his potential to organize, inspire and provide an alternative to racism and capitalism.

The Meaning of Malcolm X Today

At the end of his life, Malcolm drew a deeper analysis of capitalism and white supremacy by providing a blueprint for black power activists, organizations and generations to follow. Malcolm matters because the conditions producing him still exist. The abject poverty, racism, high rates of unemployment, mass prison incarceration, police violence, layoffs and massive budget cuts are a by-product of a sick capitalist system based on delivering profits for a small global ruling elite. These conditions are producing a new generation of revolutionaries who will be inspired by the shining example of Malcolm X like the youth in Ferguson and nationwide.