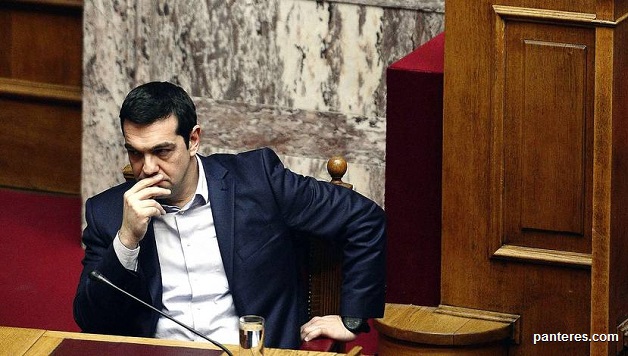 On 20 February, Greek negotiators agreed a four month extension of the current bailout program with its creditors (the Troika – EU, IMF and European Central Bank). It is reported that the Greek delegation were subject to outright blackmail by the eurogroup (finance ministers of the eurozone). The Greek Syriza government was told they would be forced to implement capital controls within days if they did not agree.

The key elements of this deal are that Greece accepts the framework of the ‘memorandum’ (austerity agreement) for the next four months; Greece will get the next bailout payment only if it is evaluated ‘positively’ by the Troika; Greece must repay all the debt on time; Greece is committed to use the bulk of the money collected by the austerity program to repay the debt and Greece will not take any “unilateral actions”.

It is clear that the agreement signifies a big retreat by the Greek government.

The four month deal may have stopped Greece immediately leaving the euro but comes at a very heavy price. Despite the positive spin by Prime Minister Tsipras, Athens made big concessions, including reneging on demands for a ‘write-down’ of Greece’s enormous debt.

Syriza claims it got the ‘best’ of bad deals on offer under the pressure of capital flooding out of Greek banks and the threat of a chaotic run on the banks. “We won time,” claimed Syriza. But time for what? The deal saw Athens having to propose reforms acceptable to its creditors. Syriza’s proposals must be approved by the eurogroup and the Troika, with April set as a deadline. Unless Syriza accepts these dictats it will not get the further loans it needs to stop defaulting on its €320 billion debt.

Does this mean that “all is lost”? This depends on the mood for struggle of the Greek working masses. The social and workers’ movements will fight to stretch their election victory over the establishment to the industrial plane, while the Troika will attempt to contain Syriza within the capitalist EU framework. The government will be squeezed hard between these two pressures. Where this tug-of-war is going to end is something which cannot be predicted because it is a battle of living forces.

Syriza should tell the truth to the Greek people. If the government has made concessions in order to gain time to implement a strategic plan to defeat austerity the people will understand and join the battle. But failing to do so will sadly show that the path the Greek government is taking is one of class collaboration with the EU and the local elite, accepting their agenda.

Syriza does not put forward a general socialist program. Its leaders pledge to stay within the capitalist eurozone, no matter what. This means imprisoning Greek workers within the straitjacket of the EU bosses’ capitalism and accepting the logic of the ‘single market’ and dictats of the Troika.

Greek finance minister Varoufakis claimed that the deal allows Greece to vary its fiscal target this year, so it can run a lower surplus and that there is “creative ambiguity” about the surpluses Greece is required to run beyond 2015. The Greek government said this will allow it to carry out some ‘humanitarian policies’. It is true that the few billion euros could ease the terrible strains on those hardest hit sections of the Greek population. This can be seen as some progress by working people, for the moment, at least compared to the dismal record of the last government.

Stakes could not be higher

But it will not be enough to pay for a series of reforms for the working class and for the sort of massive public investment desperately needed. The main parts of the Syriza’s ‘Thessalonika Program’, which itself was a retreat on previous Syriza programs, will be postponed, perhaps indefinitely. It will not go anywhere near undoing the damage of the loss of 25% of GDP over the last five years. And if the Syriza government agrees to draconian terms and conditions demanded by German capitalism it will be seen by Greek workers, sooner or later, as a U-turn and capitulation by Syriza.

Already Syriza leaders are publicly wavering on some of its policy pledges, such as on re-establishing the ERT state broadcaster. While it has claimed it will not carry out any new privatizations, Syriza has discussed the possibility of private company involvement in the “development” of facilities.

Yet there is huge public support for a radical, anti-austerity program. Over 100,000 people rallied in central Athens on 15 February, in support of Syriza’s initial negotiating position. The mood was combative. The fascistic Golden Dawn and reactionary nationalism have been pushed into the background because of a new anti-Troika, anti-imperialist mood. 66% of Golden Dawn voters said they agreed with the Syriza government’s stance. This shows the huge active support that could be won for a bold struggle against the Troika on a clear anti-cuts and socialist program, including repudiation of the debt, ending all austerity, capital controls, state monopoly of foreign trade and democratic public ownership of the big corporations and banks, to meet the needs of the many not the few – and a class internationalist appeal to the workers of the rest of Europe.

Even if Syriza just stuck defiantly to its Thessalonika Program, workers and the poorest in Greece would enthusiastically mobilize in support of its implementation, with active support from workers across Europe, challenging their own cuts-making governments.

If the left fails to show a way out and the middle classes and big sections of the working class fall prey to frustration and demoralization, it will pave the way for the return of New Democracy and other pro-austerity parties to power and even a renewed growth of Golden Dawn. The stakes could not be higher for the Greek and European working class.

This article is excerpted from an interview with Nicos Anastasiades which will be carried in the March 2015 issue of Socialism Today (the monthly magazine of the Socialist Party England & Wales).