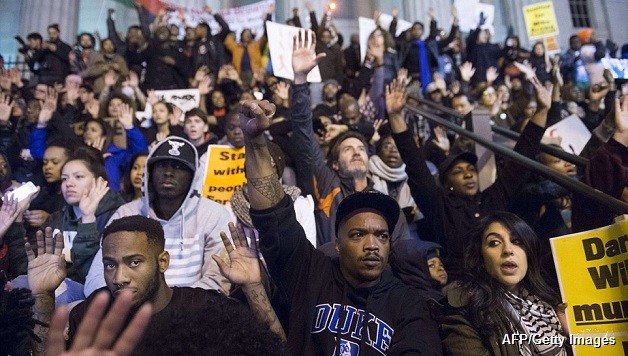 The movement initiated by young people on the streets of Ferguson last August has grown to become the most significant challenge to institutional racism in the U.S. since the 1970s. Young black activists have played the key role in building increasingly diverse protests against police brutality, rightly demanding accountability and justice for those killed because of where they lived and the color of their skin.

There was much talk when President Obama took office in 2008 about a “post-racial” society. That talk is over. The underlying realities of living under a deeply unjust social system are being exposed for all to see. In this sense, the #BlackLivesMatter (BLM) movement continues and deepens the work which Occupy Wall Street began by relentlessly exposing the massive and growing inequality that disproportionately affects people of color, particularly black families, in our society.

The U.S. remains divided along race as well as class lines. Throughout the history of capitalism, racial division has been the key – though not the only – tool used by the elite to prevent a more decisive challenge to their domination. Changing this reality requires a mass struggle that fights for both racial and economic justice.

Black Lives Matter is also picking up where Dr. Martin Luther King, Jr. and Malcom X – leaders who gave their lives in the fight for black freedom in America – left off. But like every movement posing a serious challenge to the system, BLM is facing and will face serious challenges itself. The killing of two police officers in New York City by a mentally disturbed man in December was used by right-wing forces to try to push the movement off the streets. They made the outrageous claim that people peacefully protesting police brutality and an unjust “justice” system were somehow responsible for inspiring murderous hatred against the police.

But this movement will not be so easily deflected. The genie is out of the bottle. Like the Civil Rights Movement, BLM is challenging systemic racism and is, therefore, faced with questions of how racism can be ultimately defeated and what is the road to achieving that victory.

At the end of their lives, both Malcolm X and Martin Luther King were grappling with these questions. Their speeches and work pointed toward the necessity of mobilizing wider social forces in the struggle for economic and social justice. This remains the correct path. It is urgent that the labor movement join hands with those fighting to end racial injustice and bring its considerable resources to bear. There is real potential to widen and broaden this movement and thereby resist the attempts of the elite and their politicians to isolate it.

I have confidence that the movement will meet and overcome these challenges – in no small part by drawing from the rich history of the movements and leaders of the past, but also because of the boldness, audacity, and determination of this new generation.

Interview: The Bus Driver Who Refused to Transport #JusticeForGeorgeFloyd Protesters to Jail