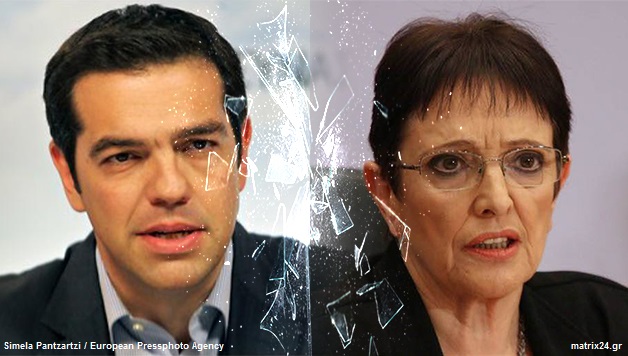 SYRIZA has formed a coalition government with the Independent Greeks party, a party that emerged from a New Democracy split and which therefore is a party faithful to the capitalist system and which is penetrated with the logic of the capital and of the “forces of the market”. SYRIZA’s cooperation with such a party is of course a dangerous trap!

SYRIZA moved in this direction after having contacted the KKE (Greek communist party) to discuss the possibility of forming a left coalition government. The KKE refused any kind of collaboration with SYRIZA, even refusing to give a vote of confidence to a SYRIZA government. This stand, i.e. a refusal by the KKE of any kind of collaboration and of a vote of confidence to a SYRIZA-led government, was repeated publicly many times in the course of the election campaign by the KKE leadership. Off the record information from inside SYRIZA says that Tsipras telephoned the general secretary of the KKE, Koutsoumbas, on the night of the election results but the latter refused even to meet Tsipras.

Why did the KKE refuse?

The KKE justifies this refusal on the basis of “ideological and political differences”.

But what prevented the KKE to saying “yes” to working with Syriza “under certain conditions”? What prevented the KKE from putting a number of minimum conditions as necessary for possible cooperation/vote of confidence, i.e. a series of measures in the interests of the working class and the mass of Greek people and against the power of the big capital?

The KKE could have given a vote of confidence to the SYRIZA government, on the basis of and as long as it carried out pro-working class policies. It could give a vote of confidence but at the same time claim to maintain its full ideological, political and organisational independence. The SYRIZA leadership would thus have had no “justification” to turn to the populist, right wing Independent Greeks. The KKE would thus be able to reach out to SYRIZA’s left rank and the millions of workers that voted for SYRIZA, to get rid of the barbarism of the Troikans.

The KKE leaders say they are “proud” that they maintained their forces and slightly increased them in relation to June 2012 (by 1%). But, in reality, their support plummeted, to 3% below the elections of May 2012 and below half of its percentages support back in 1981 (around 11%)!

Is it possible for a “communist party” that describes itself as a revolutionary party, at the time of the deepest ever economic crisis, and facing a massive social catastrophe for society, to say it is happy with winning 5.4%? A revolutionary socialist/communist party with a significant base among the working class like the KKE should have, in these conditions, “taken off” (like the Bolsheviks during 1917). But instead of trying to see what was wrong with their politics, the KKE leaders state that they are ‘satisfied’!

What does “cooperation” mean?

The KKE could have proposed to SYRIZA a minimum, clear pro-working class program as a necessary precondition for cooperation/vote of confidence. It could propose, as a minimum for cooperation, a series of measures such as the reinstatement of the minimum wage, of pensions and labor relations, massive investment in education and health, for an end to privatizations and for the abolition of TAIPED (i.e. privatizations imposed by the memorandums) for the renationalization of all privatized public services, for the banking system to pass to the ownership, control and management of the workers etc. (some of which the SYRIZA government has actually started to carry out).

Alongside such a “minimum agreement”, the KKE could openly and freely declare its disagreements with SYRIZA, e.g. on the latter’s intention to remain within the eurozone, on the fact that SYRIZA was not pursuing for the total cancellation of the debt but only a partial one, etc.

Who would gain from such a stance? If the SYRIZA leadership had refused to agree to the “offer” of the KKE, its leadership would have been exposed and the KKE’s appeal to both workers and the SYRIZA left rank and file would have rocketed. If the SYRIZA leadership had accepted such an agreement with the KKE, the KKE’s appeal would have been even bigger among the mass of the workers and SYRIZA’s rank and file, because the working class would gain from a more left policy by a government of the Left and because most workers would identify such left policies as applied under the pressure from the KKE.

The KKE leadership describe themselves as the advocates of revolution in Greece, but the essence of the success of “revolutionary politics” is to be able to convince the masses, the millions, of the necessity of revolutionary socialist policies – not to exclude and isolate oneself from the masses in a sectarian “oxygen vacuum” in the name of some ideological ‘purity’.

Acting in a “clever” fashion, the SYRIZA leadership called for the KKE to cooperate and when the latter refused they went into cooperation with Independent Greeks. At this stage, many Greeks regard this as the only option for SYRIZA and that the KKE leaders contributed towards this outcome.

But despite that, among the SYRIZA rank and file, and also among many workers in general, it must be clear that such a government will be unstable. In the initial period, the Independent Greeks will probably agree to a number of popular policies and relief measures – already the coalition government is making a series of reforms welcomed by the working masses – but the central differences that will come up, sooner or later, will be around the fundamental character of the capitalist economy and the interests of the rich elite. It will be about the policies that tax wealth, that “hit” the profits of the businesses and the multinationals, let alone nationalizations and workers’ and social control.

These are not abstract or academic issues! Without such measures, the economy will not enter the road to recovery that really benefits working people. Without economic recovery the crisis cannot be overcome, and will lead to further major social and political turmoil.

These will be reflected within the new coalition government causing a crisis within it.

That is why, the SYRIZA rank and file will have to prepare themselves for an oncoming crisis with the Independent Greeks. And there is only one way to do this. There must be a struggle within SYRIZA, and from the left and workers outside it, for SYRIZA to adopt a bold program that will consistently serve the interests of the working classes and the middle layers that are being crashed by the Troika policies. That, in essence, means a socialist program – something that the SYRIZA leadership has shown that it has no intention of doing, unless compelled to by the enormous pressure of the left party rank and file and of society.

If and when the Independent Greeks make clear their refusal to support any government measures that hit the interests of the ruling class, then SYRIZA should be ready to go for a popular mandate and snap elections. The Greek masses will understand that the Independent Greeks are an obstacle to carrying out policies that would serve their interests. SYRIZA could, thus, increase its electoral support for a majority government, by putting forward a consistently pro-worker, anti-austerity and socialist program! The point is whether the SYRIZA leadership want to! The left rank and file of SYRIZA and the working masses in general, no doubt, do want such a course. This, however, is far from clear from the leadership.