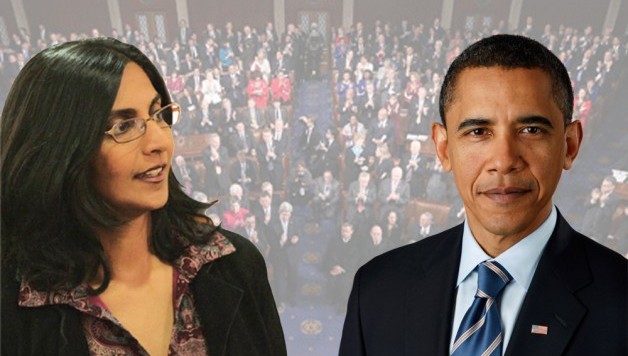 On January 20, 2015 Socialist Alternative member and Seattle City Councilmember Kshama Sawant gave the #SocialistResponse to President Obama’s 2015 State of the Union Address. The transcript is below.

Six years ago, Obama was elected on the hope that he would represent the millions, not the millionaires.

When Obama delivered his first State of the Union address, Democrats occupied majorities in both the House and Senate.

Today, after massive disappointment and disillusionment for the American people, he faces Republican majorities in both branches of Congress. Six years later, will millions of Americans finally get the president they voted for?

Some of the proposals Obama made tonight point in the right direction:

But how does Obama plan to overcome the inevitable Republican obstruction?

How will Obama get any serious measure to tax the wealthy or against climate change past the entrenched and undemocratic power of Wall Street and big business?

There is no answer to this from Obama.

He talked about the economic recovery.

But the truth is for the vast majority of us this has been a joyless recovery.
Americans face the highest levels of inequality in almost a century.

Under Obama the gap between rich and poor has only widened.

But the last two years have seen the shaping of the kind of forces that can reverse this stunning inequality – the historic grassroots movements for a $15/hour minimum wage by heroic low-wage workers taking strike action.

And we won a $15 minimum wage in Seattle – the first major city to do so – by building a movement of low-paid workers together with unions, community organizations, 15 Now, and others.

Critical for $15 in Seattle was the election of an independent working class candidate who boldly championed it, which forced the political and business establishment to reluctantly make a concession on this issue.

In contrast, Republican and Democratic politicians, rather than fighting to raise the minimum wage as we did, have instead been taking donations from the same fast food companies that workers are striking against.

This year also saw a $15 ballot initiative passed by a huge margin in San Francisco, and statewide ballot initiatives to raise the minimum wage pass by super-majorities, including Republican dominated states.

Our task is clear – we need to continue to build this movement and democratic organizations like 15 Now to make 2015 the year we win 15 across the nation.
Obama spoke about helping the middle class. He spoke about housing issues.

Yet while cities like Seattle have to deal with astronomical rent increases and gentrification, we are simultaneously facing cuts to federal funding for low-income housing.

Here in Seattle I along with public housing tenants and community activists just led a successful battle to stop a 400% rent hike for low-income housing in Seattle.

I hope this example of resistance and struggle can spread nationally where other cities are confronted with similar attacks.

Socialist Alternative, tenants, and I are campaigning for emergency measures like rent control to address this spiraling crisis.

But emergency measures will not be enough. The so called “free market” has miserably failed to provide affordable housing.

I am working on a plan for the Seattle city government to build thousands of high-quality publicly owned houses to rent at below market rates.

But to win any of this, tenants and homeowners need to build their own housing justice movement, acting locally, but connecting nationally.

Obama´s pledge to say No to Keystone XL and to cap methane emissions are necessary first steps.

But let’s be clear: he has utterly failed to take on the power of the 90 companies who are responsible for almost two thirds of the climate emissions in history.

Instead he brags about being the “Fracking President.”

As Naomi Klein said, this is about capitalism versus the climate.

We need to act here and now. But we can only deal with climate change if we break the power of the giant oil and car companies who are determined to extract every drop of oil from the ground.

Addressing climate change means organizing society around the interests of the 99%, rather than around profits and fiercely competing nation states.

We need a democratic socialist society based on international cooperation.

Real progress is only won by millions stepping into action. We saw that with the tremendous People´s Climate March which had half a million people rallying in New York City. We need to take this forward and demand concrete action. In Seattle, we are pushing forward to ban oil and coal trains from passing through the city.

Last year saw the beginning of the most important movement against racial injustice in decades.

Every 28 hours, a Black person is killed by police or vigilantes in this country.

We live in the age of mass black incarceration.

This is the age of economic racism, where the average income of a black person is one third less than a white person.

After hundreds of thousands of Black workers and youth campaigned to elect Obama, he has provided no vision to address racism in our society.

The Republicans elected in the mid-terms last fall would like to think they have a public mandate.

Nothing could be farther from the truth.

The pro-corporate, right-wing agenda of the Republicans is being roundly rejected in poll after poll. This was also evident with the many progressive voter initiatives that passed in the same election that gave Republicans their majority.

The only reason Republicans won is that working people, youth and people of color are deeply disappointed after years of the Democrats doing the bidding of corporations.

This is why millions stayed home with the lowest voter turnout since the 2nd World War!

Is Obama now prepared to challenge Republicans and big business?

Unfortunately, the financial aristocracy that funded Obama’s election campaigns and promoted him to the presidency have their tentacles firmly wedded in to every nook and cranny of the White House.

Let us not forget Obama has carried out unprecedented unconstitutional spying, drone strikes, and a ferocious crackdown on brave whistleblowers like Edward Snowden and Chelsea Manning.

This is why independent working class challengers will be needed.

Candidates who refuse corporate donations, who are financially and politically independent of big business and their two parties.

We need to build our own political voice, a mass political party for working people.

Despite Obama’s speech today, bitter experience has shown we cannot rely on him to deliver.

We must work to build independent movements of working class people, of young people, of women and people of color, and the LGBTQ community.

To fight towards affordable cities, health care and education for all.

Towards a society based on economic justice, equal rights, compassion and an end to racism.

To challenge the domination of the 1%.