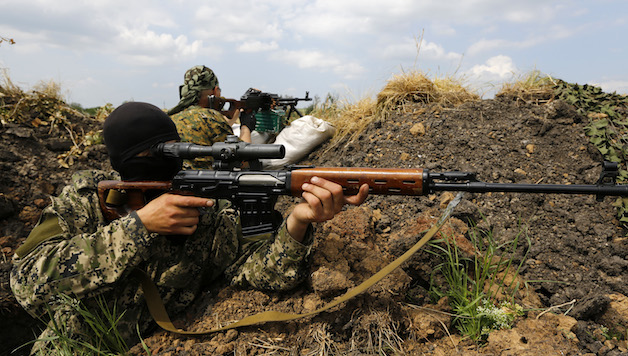 Although tentative peace negotiations may now be under way, at the time of writing this article fighting in Ukraine had been escalating sharply over the last week, as anti-government forces carried out a successful counter-attack, gaining territory in the south and east. This has led to a serious escalation of international tensions.

The Kiev regime and its western backers reacted furiously to the government forces’ losses. President Poroshenko, facing nationalist parties in parliamentary elections in October, threatened even more brutal military action against the east.

Without a hint of irony, the US and Britain accuse President Putin of making a “land grab” in Ukraine. These same imperialist powers invaded and occupied Afghanistan and Iraq and have no word of criticism over the Israeli regime’s announcement this week that it will annex more Palestinian land.

Putin, however, is no real friend of national minorities – the capital of Chechnya, Grozny, was mercilessly pummelled by Russian forces under his rule.

The western powers accuse President Putin of sending regular Russian army units over the border to bolster the rebels, who were facing defeat, they claim. The Russian regime strongly denies its forces are in Ukraine and claims only volunteers and soldiers “on holidays” are joining the rebels.

Certainly the earlier gains made by the Ukrainian army offensive are now under threat from rebel forces, strengthened by resources from Russia.

This is not only due to the bolstering of rebel forces. The Ukrainian army is badly trained and organised. There are also reports of poor morale amongst soldiers, many of whom may well be reluctant to fight a section of their country’s population.

The Kiev regime has conducted a brutal offensive in the east of Ukraine for months, shelling residential areas indiscriminately, destroying infrastructure and killing many civilians. This has only deepened opposition to the Kiev regime amongst the majority Russian-speaking population.

Despite the reactionary nationalist character of much of the rebel leadership, the majority of Russian speakers strongly oppose the Kiev regime.

This is no surprise given that protests against the former authoritarian president, Viktor Yanukovich, during late 2013 and early 2014, were successfully channelled by anti-Russian right-wing forces, including ultra-Ukrainian nationalists and outright fascists, with western support.

They installed a new pro-western regime over the heads of the population, which quickly alienated the country’s minority Russian speakers. The regime tried to impose anti-Russian language measures and later banned the Communist Party, which is regarded as pro-Russian. The formation of the self-declared “People’s Republic of Donesk”, following the breaking away of majority Russian-speaking Crimea from Ukraine, was met with a brutal military operation by Kiev.

In response to the recent rebel advances in Ukraine, the European Union (EU) threatens to step up its sanctions against Russia. But EU member states remain divided on the issue.

Some governments fear it will badly hit western companies and worsen Europe’s already gloomy economic situation. Previous sanctions against Russia have already backfired on Germany and the EU. As winter approaches, Putin could, in retaliation, squeeze Russia’s gas supplies to Ukraine and parts of western Europe.

A Nato summit taking place this week in Wales will discuss stepping up its material aid to the Kiev regime and speeding up the process of enlarging Nato eastwards. The idea of establishing a ‘rapid reaction force’ to “guard against Russian aggression” is planned.

This dangerous escalation will worsen tensions still further with the Russian regime, which has long opposed Nato’s aggressive encroaching on its sphere of influence and which regards Ukraine as its strategically vital “near abroad”.

Since the collapse of the former Soviet Union and East European Stalinist regimes, US imperialism has sought to increase its power and influence in the region, alongside European capitalism to dominate the new markets at the expense of the emerging capitalist regimes, Russia in particular.

US President Obama rules out direct confrontation between Nato and Russia. The reality facing western powers was highlighted by Putin’s blunt reminder that Russia is a nuclear power and “it’s better not to mess with us”.

There are limits to Nato’s ability to respond but a new ‘Cold War’ is developing, albeit on the basis of opposing capitalist regimes this time.

Ahead of talks between all sides in Minsk, that have little chance of success, Putin called for a ceasefire and rebel leaders put forward a series of demands on regional self-determination and Russian language status.

Although Putin may be compelled to annex parts of eastern Ukraine in the future, it is not his intention to do so now. It would be much more costly for Russia to maintain than Crimea.

By utilising the rebels’ recent advances, Putin may want a negotiated solution that would see Russia holding sway over large parts of Ukraine (in effect, a Russian protectorate within a ‘federal’ Ukraine) and thwarting Nato plans for Ukraine.

If the fighting is to continue, however, another “frozen conflict” is also a possible eventuality – the de-facto partition of Ukraine into pro-Western and pro-Russian territories.

None of this is a solution whatsoever for the working people of Ukraine. Competing right-wing nationalist forces and their outside power backers can only bring destruction and misery.

The Ukrainian economy is due to contract by at least 6.5% this year, according to the International Monetary Fund (IMF). The currency, the hryvnia, fell over 60% against the dollar this year.

The war in the east has had a devastating effect on the economy – the Donbas region accounts for 16% of GDP (total output) and 27% of industrial production.

The IMF is still discussing when to make a second loan of $1.4 billion to Kiev, part of a $17 billion loan, with strings attached, of course, that will see more attacks on workers’ living standards.

Only a workers’ alternative can achieve a long lasting solution to Ukraine’s ethnic divisions and chronic economic problems.

This requires building an independent political alternative in the interests of all working people in opposition to right wing nationalist and pro-capitalist forces and outside powers.

A socialist alternative would guarantee full rights for all minorities, including language rights and the right of self-determination.

It would strive for the utmost unity of the working class in Ukraine and across the region in the struggle for a socialist society where the needs of the vast majority are satisfied.