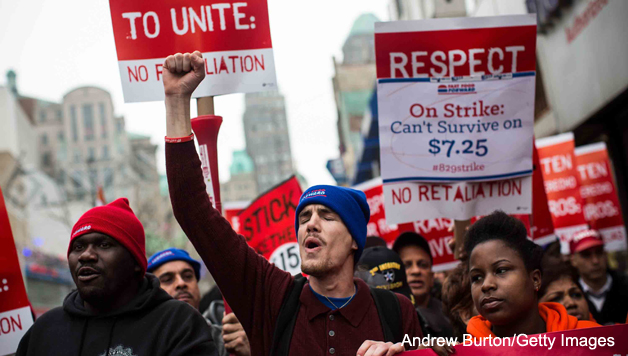 In 2012, fast-food workers in a single U.S. city – New York – went on strike to demand higher wages. Practically overnight, these strikes spread to cities across the country. In this age of grotesque inequality, people are finally coming together to demand some modicum of economic justice.

Last year, this struggle was brought to Seattle when Socialist Alternative ran a candidate for city council, Kshama Sawant, whose platform included a demand for a $15 an hour minimum wage. This key demand helped propel Sawant into office, and within the first six months of her tenure in office, Seattle won a $15 an hour minimum wage, becoming the first city in the entire country to achieve such a victory for its workers.

But Seattle is not alone. Cities and states all over the country are beginning to see people come together around this issue, particularly after President Obama’s failed attempt to raise the federal minimum wage to even a modest $10.10.

Like many of the new minimum wage proposals being put forth by the now universally pro-business Democrats, this one is riddled with unnecessary concessions to big business, like “tip penalties” and overly long and hard-to-enforce implementation schedules. But what is significant is that politicians all over the country are being forced to talk about this issue. People are sick of seeing their wages stagnate as their rent and cost of living continue to skyrocket.

In San Francisco, home to some of the greatest income inequality in the entire country, a “consensus measure” for the November ballot has been put forth that would raise the minimum wage in the city to $15 an hour.

Inspired in large part by their neighbors to the north in Seattle, activists are pushing hard to make sure the same loopholes that the Democrats and big business secured in the Seattle minimum wage law are not repeated in San Francisco. They are pushing hard against the long phase-ins the Chamber of Commerce and their political allies groundlessly claim are necessary, and they are fighting back against “tip penalties” and total compensation loopholes. If passed, the San Francisco minimum wage law would be implemented before Seattle’s, and it could avoid the many concessions Seattle’s Democratic politicians concocted in concert with their deep-pocketed business allies.

And, in further heartening news from California, activists in Los Angeles are pushing forward a similar ballot measure.

In Massachusetts, the legislature just passed a bill to raise the state’s minimum wage to $11 an hour by 2017, making Massachusetts home of the highest state minimum wage in the country. While this is undeniably a huge gain for hundreds of thousands of workers, the bill has serious problems. One is that that $11 an hour is not indexed to inflation, so what seems like a big gain now will rapidly erode.

And then, of course, there’s New York City, by far the most expensive city in the country. As newly elected Mayor Bill de Blasio rides into office decrying the “tale of two cities,” he has yet to come out publicly with a plan to raise the minimum wage.

Recently, however, Governor Andrew Cuomo, in order to secure the support of the titularly progressive Working Families Party, claimed he would raise the state minimum wage to $10.10, allowing municipalities, which currently don’t have the right to set their own minimum wage, to go 30% higher than that. This would mean New York City could set its minimum wage at $13.00 an hour. While this is woefully inadequate in a city as expensive as New York, it suggests that there is serious political pressure building to move on this issue.

This is why, now more than ever, as these cities and states across the country begin to take up the issue of the minimum wage, it is imperative that activists, workers, and organized labor join together to demand a meaningful minimum wage increase. We need to make sure that the increase is pegged to inflation, that it doesn’t include “tip penalties,” that we get rid of all total compensation loopholes, and that these increases are implemented immediately for all businesses, not years down the road.

To accomplish this, we need as many people as possible to get involved. You can start petitions demanding a minimum wage increase on both a city and state level; you should pack city council hearings on this issue; and you can join up with 15 Now, a nationwide grassroots campaign dedicated to fighting for a higher minimum wage. It is time to do more than just imagine a world without frozen wages and soaring rents; it is time to demand one.