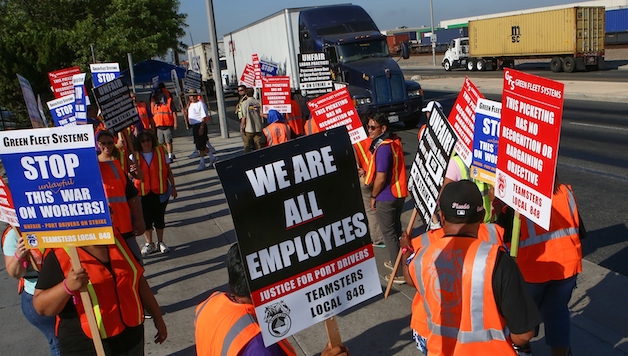 Some bosses think they can just keep robbing workers blind, and there will be no negative consequences for them. That’s what started this fight.

On June 30th, thirty big rigs surrounded the headquarters of Total Transportation Services, Inc. (TTSI), a Southern California port hauling firm. Drivers were protesting the company’s recent decision to charge them for parking their company-owned trucks in the company-owned yard. TTSI decided they wanted $25 a week from each driver.

This was not the first straw. For years workers have been driving company trucks and paying maintenance, insurance, fuel and leases. Consequently, their wages had often dipped below minimum wage.

There are 12,000 southern California port truck drivers, the bulk of whom are immigrants. Nine out of ten are not direct employees, but are considered “independent contractors.”

On Monday July 7th, 120 Port of Los Angeles and Long Beach truckers at three companies put their truck keys in their pockets and picked up picket signs. These non-union drivers, with the support of Teamsters Local 848, were done taking it. For many of these workers this was their first ever strike.

In 1980 Democratic President Jimmy Carter signed into law the Motor Carrier Deregulation law which sought to reduce costs for hauling companies and inflate profits. During the following fifteen years, truckers’ wages collapsed by 30%. Companies stopped hiring employees directly and pushed variable expenses like gas and insurance onto workers, designating them as “contractors.” Today 82% of big rig drivers are classified as independent contractors. All the rights and gains of past union struggles were robbed from them.

These workers are trapped between the pressures of keeping their rigs up and running and making enough to feed their families. “The truck is not mine at all, but I am left with all this responsibility, even to fix the truck,” said one worker.

Into the strike’s fifth day a mass rally of 500 workers was held outside one of the port gates. Other drivers, looking at their shrinking pay checks, no doubt are watching the effects of this strike.

At the same time as truckers were striking the Ports of LA, the contract of one of America’s most powerful unions, the west coast International Longshore and Warehouse Union (ILWU), had run out on July 1st. The ILWU agreed to keep containers moving until they signed a new contract. One group of rank and file longshore workers opted not to work, as a solidarity action with the striking teamsters, but were forced back to work by a federal arbitrator.

On Monday, July 14th, the Teamsters, through Justice for LA Drivers, announced a cooling-off period. The employers would allow striking drivers back to work and claimed they wouldn’t retaliate against individual strikers. In return, workers got a promise from a politician, LA’s Mayor, Democrat Eric Garcetti, would step in. A local Teamsters International Vice President explained that “while the drivers wanted to continue the strike . . . Mayor Garcetti personally committed to them that he will thoroughly investigate the serious injustices the drivers presented.”

According to the National Retail Federation, if this strike had widened to all drivers at the LA and Long Beach Ports then the U.S. economy would have lost $9.4 billion over the course of the five-day strike. It is no wonder the Mayor wanted to squash the strike.

Militant strike action forced the mayor to intervene. There are two and a half million union members in California and millions more that support better wages and conditions at work. Within hours of the strike’s initiation, some $50,000 was raised for the unofficial strike fund.

This strike began as an open-ended strike, unlike many previous one or two-day strikes. This could represent an increase in the mood for a sustained strike. Up against this mood, if the employers do not keep to their promise to not target returning strikers, a new strike may break out.

If such a strike restarts then union leaders should make an open call to all the local union members and sympathizers in the LA region. Thousands of workers could flock to the Ports and solidly close them down. Building on the success in the city of Seattle, a broad demand for a $15/hour minimum wage could accelerate enthusiasm for such a movement. Sending protesting workers out along the truck routes to the low-paying-high-profit retailers where containers are headed could advance the movement into those workplaces. In this way, workers at Wal-Mart, Home Depot, Target and many more retailers could see an opening for themselves to win a living wage and even a union.

This movement is also taking place in the background of an increasingly powerful national movement for a $15/hr minimum wage. Following the success of winning $15/hr in Seattle, together with the victory for $15/hr among Los Angeles school workers, LA activists are now gathering signatures for their own city-wide $15/hour minimum wage. The demand for a $15 minimum wage has now come forcefully onto the agenda in a whole series of cities, and it’s clearly catching fire in LA. A broad demand for a $15 minimum wage could accelerate enthusiasm for an expanding fight by the port truckers.

The recent small strike by truckers in the Ports of LA was a big step forward for the rank-and-file workers involved. However, it is necessary to say clearly that strikes can be won if two elements are achieved: if production is completely halted and if the strike is widened. Following a narrow path of lawsuits and befriending Democratic politicians will not help take the movement forward.

One striking truck driver at Pacific 9 Transportation said: “Never again will we be silent and accept the harassment and indignities that our bosses inflict on us. We will not be intimidated.” Another characterized the mood to fight: “We’re in this to win.”