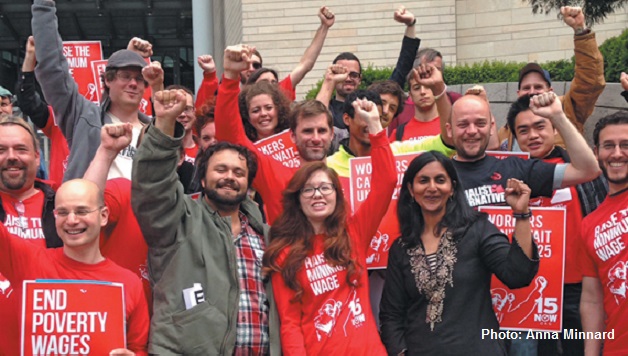 I’m so proud to stand with all of you, celebrating the success of our movement. The $15/hour minimum wage victory in Seattle was the result of workers, community organizers, and labor activists joining together to build power.

After decades of setbacks, attacks on workers’ rights and living conditions, and the ongoing greed of the richest 1%, this is a historic moment. 100,000 workers in Seattle will see a raise in their wages. $3 billion will be redistributed from business into the pockets of working families over the next ten years. Across the country and around the world, millions are inspired by this important first big step to bridge the chasm of income inequality.

We did not achieve everything we fought for – but we fought hard. This movement has every reason to be proud of our achievement.

For me, there are three main conclusions to highlight.

First, when workers organize, we can win. The courage of the fast-food workers who went on strike was decisive in raising expectations and putting the fight for $15 on the agenda. Like the Occupy movement before it, these strikes expressed and pushed forward the deep popular rage at class inequalities in America.

What made Seattle unique – and allowed us to transform the slogan of fast food strikers into a reality for 100,000 workers – was that we built a well-organized grassroots movement, 15 Now. Open to everybody and democratic, so activists had ownership over the struggle, 15 Now mobilized working people to stand up for their own interests. Wherever you are, I urge you to join 15 Now, donate at 15Now.org, and help spread this grassroots movement nationally.

Second, workers cannot rely on the two parties of big business to represent their interests. We have to build our own independent political alternative.

When I was sworn into Seattle City Council on January 6, I announced the launch 15 Now in Seattle. Just six months later, the council voted in a $15/hour minimum wage ordinance. The speed of this victory is virtually unprecedented in Seattle politics. It happened because my organization, Socialist Alternative, and I used our newly won position to build a grassroots movement outside the council chambers.

This can be done in cities across the country. We need more independent left working-class candidates, linked to building movements and challenging the big business politicians of both parties. We must avoid the trap of lesser-evilism, the idea that we can rely on the Democrats to stop the Republicans. In reality, the Democrats never deliver without pressure from below, and this pressure is all the greater if we are prepared to challenge them in both the streets and in elections. Just look at Obama’s empty call for $10.10 with no strategy to win, no attempt to build a movement – and compare that to how we won in Seattle.

Third, you don’t have to be a socialist to fight back – but it helps! A real mass movement must welcome everyone who wants to join the struggle, but history has shown again and again that movements are most effective when they have a core leadership who refuses to accept the limitations of capitalism and who can build mass support behind a vision of an alternative.

In my election campaign last fall and in the movement for $15, I learned that working people are inspired by an unapologetic, principled approach. Let’s demand what people need to live a dignified life, not just what the political establishment says is “realistic.” To push things forward, we’ve got to provide a vision of what’s possible with the huge wealth working people create – and not confine ourselves to the crumbs this broken system of capitalism can “afford” to give us.

I’m confident we can build a powerful socialist movement in this country. But it requires everyone who rejects the dominance and greed of the 1% to join us in boldly calling for a socialist alternative. Join us today; you can sign up at socialistalternative.org/join. Become a part of the growing movement that links today’s campaigns for economic justice with a fundamental change in society, to replace corporate dominance with a democratized economy.

The victory in Seattle was an excellent first step. We must use the energy to spread the fight for $15 nationally and to expand the struggles on other key issues facing working-class communities. If we organize with a bold perspective and a socialist vision, we have a world to win.