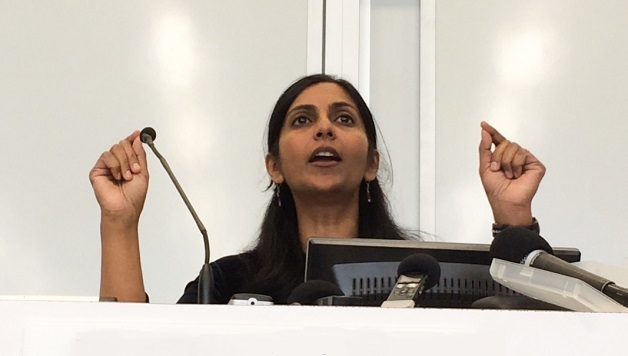 Organizers announced that up to 6,000 people participated in this year’s Left Forum in New York City, held during the weekend of May 30th – June 1st. In recent years, the Left Forum has established itself as the largest annual gathering of the U.S. left. This year’s largest-ever attendance is another indication of the growing search for an alternative to capitalism in crisis.

While many Left Forum speakers lamented the continued weakness of the U.S. left, the election of Kshama Sawant and the $15/hour minimum wage victory in Seattle were repeatedly raised as points of hope.

Stanley Aronowitz, the central organizer of the Left Forum and opening speaker, pointed toward Socialist Alternative’s victory as the key example of the “good news,” before elaborating on the wider failure of the left to prevent the decades-long rightward swing of the Democratic Party, and calling for the formation of a new left party.

Indeed, support for the idea of building working class political independence and a new left party was striking. In numerous workshops and discussions on the issue, speakers from a broad spectrum of the U.S. left debated and discussed the new openings for independent left election struggles and the need for a new party. Socialist Alternative members were at the center of these discussions, relating our experiences in Seattle, Minneapolis, and beyond to interested audiences.

Socialist Seattle City Council Member Kshama Sawant brought the house down in front of thousands at the Left Forum. On Saturday afternoon, Sawant spoke to a packed auditorium alongside Bernd Riexinger of German party Die Linke. Then she closed out a superstar evening as the featured “surprise guest,” speaking after Harry Belafonte, Angela Davis, and David Harvey.

Glen Ford, the executive editor of Black Agenda Report, introduced Sawant and praised the role of Socialist Alternative’s leadership in the struggle to win a $15/hour minimum wage in Seattle. “[Socialist Alternative has] doubled its membership since Sawant’s election,” Ford informed the packed hall.

Sawant spoke about the two strategic priorities for the U.S. left. “Our primary task is to challenge capitalism. We must create an alternative,” Sawant said to loud applause. “To do that, we need mass movements to challenge the state and strong organizations to run in elections. [Socialist Alternative] calls for an independent, left, working class party in the U.S.” Sawant also explained the significance of the $15 minimum wage victory in Seattle. “This marks one of the first offensive gains for the working class in a long time,” she said. “The $15 demand marks a decisive challenge to capitalism, made possible by linking the power of elected office with the struggle of a real movement. Without both, the victory of $15 in Seattle would not have been possible.”

The room erupted in applause when Sawant cited studies predicting that the increased minimum wage would transfer $3 billion to Seattle’s workers over 10 years and would reduce poverty in Seattle by 25%. Jess Spear, the organizer director of 15 Now – and now a Socialist Alternative candidate for the Washington State House – explained at a Left Forum workshop on the $15/hour victory that, “From the beginning, our strategy to win a $15/hour minimum wage was to build a powerful movement from below, not to rely on back-room negotiations.”

Speaking alongside Jess Spear at the 15 Now workshop was the independent journalist Arun Gupta, who explained: “It was impressive to see how effective Socialist Alternative was at combining inside/outside tactics. It was like a chess game, with every move by the Mayor and business met with a counter-move by 15 Now. Sawant’s position at the negotiating table was strengthened by rallies and protests.”

Arun Gupta’s comments at the workshop echoed his recent article in Al-Jazera America: “Sawant’s ascendancy has shown that being a socialist is no longer a liability in running for public office. More importantly, the $15-an-hour campaign has nurtured a model of grassroots democracy that challenges the corporate-controlled political process. Observers expect the bill to pass by the end of May. If it passes, the win — though imperfect — will validate Socialist Alternative’s approach, swell its ranks, and crack open more space for socialist politics in the United States.”

Organizers with 15 Now and Socialist Alternative spent the weekend energetically appealing for donations to 15 Now in order to expand the campaign nationally. By the end of the weekend, evidence of their success was visible as dozens of Left Forum participants donned the red 15 Now t-shirts they had purchased.

If you haven’t already, donate today at 15now.org!

My Experience at the Left Forum

Coming from Alabama, I had no idea what to expect at an event like Left Forum, in which thousands of leftists come together to exchange experiences and ideas. Over the course of two days at Left Forum, I was not only able to listen to some interesting lectures, and engage with other activists, I was also able to serve as a panelist for two sessions, one on “Fighting for Socialism in the Deep South”, and the other on “Abortion Rights, Race, and Class.”

It was really inspiring to see how receptive those who attended these sessions were to socialist ideas. It was also incredibly validating to see how many young left activists are now looking to our organization to point the way forward.

Kshama’s election and the way that we used the electoral victory to win something concrete for working people, seem to have instilled in many on the left a renewed sense of hope. While much of the left leaders at the Forum seemed pessimistic, the Socialist Alternative sessions I helped facilitate were not. Instead they focused on developing a viable strategy to overcome even the seemingly impenetrable barriers to progress we face in the South, and the importance of building Socialist Alternative and the fight for 15 were not overlooked.