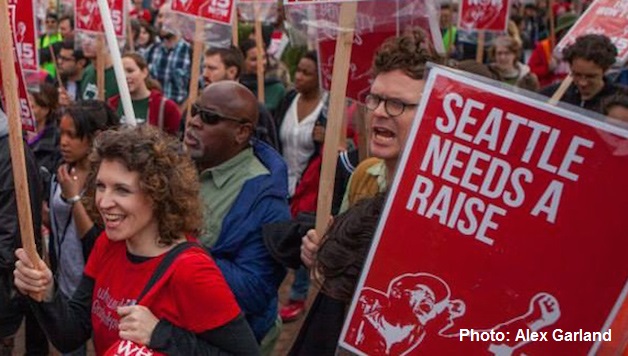 Step up the Pressure to Close Corporate Loopholes!

Working people across the country are being galvanized by the “fight for 15” with the movement in Seattle headlining in national and international publications. As the Seattle City Council debates a plan for a $15 minimum wage, protests and strikes in over 150 cities took place on May 15th. A recent social media posting about victory for $15 in Seattle was shared more than 150,000 times and viewed by millions.

Led by 15 Now, labor, and Socialist Alternative City Councilmember Kshama Sawant, the movement has forced a plan for $15/hr onto the agenda of the Seattle city government. Reflecting this intense pressure, Democratic Mayor Ed Murray and his advisory committee of business and labor leaders presented a proposal to the city council to raise Seattle’s minimum wage to $15 in 2017.

This would be the highest minimum wage in the nation, raising 100,000 Seattle workers out of poverty. Economists estimate it would mean businesses would have to pay their Seattle employees nearly $3 billion more over the next 10 years. This represents a huge victory for working people, particularly against the background of three decades of unrelenting attacks and defeats.

But the fight isn’t over yet. While conceding $15, business and the mayor have inserted a number of loopholes in to the proposal to soften the blow to corporate profits as much as politically possible. These include a 3-4 year phase-in for big business and a 7-10 year phase-in for the majority of businesses, as well as a temporary tip penalty and healthcare deduction.

On May 1st when the mayor’s Income Inequality Advisory Committee announced its proposal, they argued it was a “carefully balanced” compromise between business and labor and therefore no changes should be made (i.e. no effort to shorten the phase-in, remove the tip penalty, etc.) or else the entire deal would fall apart.

Unfortunately the labor representatives on the Mayor’s advisory committee accepted this, and argued against organizing to demand the City Council improve the proposal. However, business showed no such loyalty. Almost immediately following the May 1st announcement, business forces began a campaign to extract further concessions, as Councilmember Kshama Sawant and Socialist Alternative had warned they would do.

This was confirmed when two weeks later on May 15 – after intense backroom negotiations with business – Mayor Murray sent to the City Council the actual text of his proposed legislation. It quickly became clear that Murray’s draft legislation had in fact altered the original agreement by adding in a training wage and extremely weak enforcement provisions.

Murray stated quite provocatively to the Seattle Times “It’s [training wages] something that initially we couldn’t get labor to agree to. I’m not sure we got them there, but we did it anyway.”

Business also arrogantly demanded further concessions from the City Council, such as including franchises and giant non-profits in the small business tier (with a 10 year phase-in) and making the tip penalty permanent.

Socialist Alternative has argued it is possible to beat back further efforts to undermine $15, close the loopholes and win a stronger $15, but doing so will require a stronger mobilization by labor and activists. An organized campaign to immediately kill Murray’s training wage will show the Mayor and all his business friends behind him – if there is any change to his proposal, then it must be according to the needs of low-paid workers, not for corporate profits. This would mean real enforcement mechanisms, a shorter phase in, and removing the anti-worker tip penalty.

While victories under capitalism are always incomplete, what can be won is determined by the balance of forces – the strength of our class versus big business. If labor had used its full social weight and resources over recent months a stronger measure for $15 would be on the table now. But it’s not too late – if the movement and labor effectively mobilize we can defeat business lobbying efforts and strengthen the proposal.

At the same time $15 is being debated in the council, 15 Now hit the streets on May 15th to launch a signature gathering campaign to put a charter amendment on the ballot. To keep the pressure on the City Council 15 Now is collecting thousands of signatures to present to the Council before it votes on the measure to demonstrate the popular support for a $15 proposal which does not give big business a phase-in or contain a tip penalty.

Labor Begins to Push Back

A glimpse of this potential was seen over the past week, when labor began to move away from it’s strategy of defending the mayor’s proposal without pushing for improvements and began to more energetically oppose the efforts of business to water down the Mayor’s proposal further.

The resolution also stated that the Labor Council would inform its members and mobilize them for a campaign of phone-calls to the City Council and pack the June 9 Council meeting to make these demands heard.

This resolution was a result of a growing realization among union activists and leaders that business was not respecting the Advisory Committee’s grand bargain, as well as the campaigning of 15 Now to expose businesses efforts and argue for the labor movement to start pushing back. 15 Now supporters in the unions drafted the resolution, campaigned for it within the labor movement, and brought it to the Labor Council.

The executive secretary of the Labor Council, David Freiboth, who sat on the mayor’s advisory committee, told the delegates, “There’s been some effort by the mayor to ask us to hold back, and not move this tonight. I think we should move it. And I think we should tell our allies and anybody else who’s listening that we’re not happy with what’s going on.” (The Stranger, May 22, 2014)

“I’ve gotta say, I’m a little disappointed in our mayor right now … They’re claiming that they misspoke,” fumed Freiboth about the mayor’s office. “I’m not sure I buy that… I kinda have an idea when I’m getting played. And I think we’re getting played.” Freiboth went on to say these developments showed that Councilmember Sawant, 15 Now and Socialist Alternative had been right in their earlier warnings. Freiboth also stated that if things continued in the same direction that labor would need to seriously consider taking $15 to the November ballot.

On the same night David Rolf, president of SEIU 775 and co-chair of the Mayor’s Advisory Committee, along with other labor representatives and allies on the Advisory Committee sent a letter to the City Council raising opposition to the business friendly amendments being considered. They also declared that if changes to the initial compromise proposal were going to be made, it should be to improve the bill by shortening the phase-in and removing the tip credit.

However, the letter ended by qualifying its criticisms, “we want to be clear that we believe the Mayor’s compromise proposal remains the best way forward. Passing the bill as is would lift 100,000 workers out of poverty and put $3 billion into low wage consumers’ pockets in the first 10 years. Moreover, the compromise embodies a delicate and hard-fought balance of interests. Substantial revision could result in the collapse of public support for the mayor’s proposal. We urge you to pass the deal as recommended.”

Immediately following these developments the Mayor pulled back from pushing a more aggressive training wage and the majority of the City Council signaled they aim to fast track the vote on the bill to Thursday May 29 (with a final vote on Monday, June 2). This indicates their fear of setting off a major backlash from working people if they continue to pursue anti-worker changes to the $15 measure.

Simply the threat of a serious labor-backed campaign to improve the bill was enough to make the Mayor and the City Council reconsider their approach. This confirms the position of Socialist Alternative, which has argued a stronger $15 can be won if labor joins together with 15 Now to throw their full weight behind building an all-out struggle.

If the Mayor’s plan is adopted by the City Council, despite its limitations, it will be the highest minimum wage in the country. It will also have major national and international ramifications, raising the confidence of millions and strengthening the push for $15 in cities across the country.

Already, the movement for $15 in San Francisco has moved ahead with a stronger ballot initiative including a shorter phase-in and no tip credit, which reflects the strong labor backing behind this initiative.

If the City Council votes to adopt a $15 minimum wage the movement for $15 in Seattle should take this as its own achievement. The only reason $15 is being debated and on the verge of being passed is due to the movement of working people, despite the hurdles thrown up by establishment politicians and big business. We should celebrate the passing of a $15 minimum wage without dropping any criticism of its limitations and deficiencies.

Most of all, we need to shout from the rooftops that the experience of Seattle, the experience of the campaign organized by 15 Now and Socialist Alternative Councilmember Kshama Sawant, shows what can be won when workers organize and fight back. We need to spread 15 Now across the country and push forward with re-building the workers’ movement and an alternative to the two parties of big business.

On May 13 a new poll was released showing support for a $15/hr minimum wage in Seattle had grown to 74% from 68% in January. Support is higher among women (79%) than men (68%). Reflecting the mass politicization that has taken place in Seattle around this issue, the poll reported 83% of likely voters are following the issue very closely or somewhat closely.

A majority (51%) were against any phase-in for big business (the position of 15 Now and Kshama Sawant), with only 35% supporting a phase-in for big business (as the mayor proposes). On the issue of counting tips and benefits towards the minimum wage, the poll revealed a mixed picture, but overall public opinion was weighed more towards the proposals of 15 Now and Sawant than the mayor’s. Only 23% supported counting tips and benefits versus 38% who opposed it, with another 26% agreeing they should be counted temporarily.

All of this demonstrates the real potential – if the leaders of the Seattle labor movement gave a determined lead – for building a bigger movement and winning a stronger $15 than what the mayor proposed. However, the poll also demonstrated the difficulties 15 Now and Sawant would face in conducting a ballot fight without the backing of key sections of the labor movement.

The poll showed 57% supported the mayor’s plan, described as a 3-year phase-in for large businesses and 7 years for small business (which is inaccurate – the mayor’s plan has phase-in periods up to 10 years), along with a temporary credit for tips and healthcare. Fourty-five percent supported Sawant’s plan ($15 starting “immediately” for large business, rather than saying starting on January 1, 2015, and a 3-year phase-in for small businesses). A business-backed proposal for an 8-year phase-in for all businesses, along with permanent tip and healthcare credits and a training wage, received the weakest support with 41% in favor.

Interestingly, 14% said Councilmember Kshama Sawant was “extremely credible” (the same as Seattle unions and slightly higher than the mayor), but fewer saw Sawant as “credible” (18%). Overall 32% said Councilmember Sawant was credible, which was more than the Seattle Chamber of Commerce, the Seattle Times, or the Washington Restaurant Association.

The full poll results can be read here.