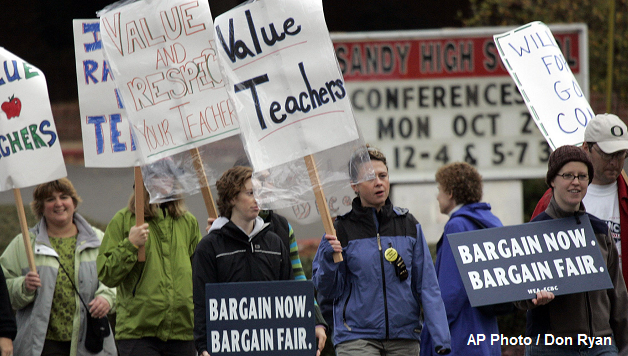 In torrential rain and near-freezing temperatures, hundreds of teachers and community supporters raised their voices to demand a fair contract. Abundant donations of food, drinks, and heaters from community members helped keep demonstrators’ spirits high. This is a scene from the picket lines of the Medford Education Association strike that shook southern Oregon in February 2014.
Ten years of state funding cuts had already pushed Oregon school districts to lay off teachers and increase class sizes to the third largest in the nation. Medford School District 549C serves 12,000 students and employs 600 teachers. Before the strike, teachers received an average salary of $45,000, well below the state average of $57,000, according to the Oregon School Board Association.

When the strike began, teachers of the Medford Education Association (MEA) had been working without a contract for seven months. After the school board broke a previous written agreement to compensate teachers for a pay freeze when additional state funding arrived, teachers refused to accept a new contract offer that would have reduced compensation and increased workloads.
Negotiations began nearly a year before the strike. The school board and the union disagreed on issues including teacher pay, cost of living adjustment, protections for prep time, working hours and days, health insurance premium rates, and retirement fund contribution rates. Community members’ support for the union would prove crucial to the negotiation outcome.

After the previous contract ended in June 2013, the school board repeatedly offered terms that would have raised teacher pay in the short-term, but lowered the cost of living adjustment below the inflation rate, added working days to the year, and increased deductions for health insurance and the retirement fund. Over time, the terms would have meant a net loss in compensation for teachers.

The union refused to accept the offer, and worked with allies such as Southern Oregon Jobs with Justice and the International Brotherhood of Electrical Workers Local 659 to organize community support. Hundreds flooded school board meetings, and dozens spoke in support of teachers. On at least one occasion, the school board canceled a meeting after union supporters announced they would fill the room yet again.

But community demands did not substantially change the school board’s offer. After negotiations reached impasse in November, the board voted in December to implement the contract offer, leaving the union with two options: give in, or strike. MEA members voted to strike on January 23. The decision was difficult, but members thought a strike was needed to get a fair deal.
“Teachers are problem-solvers by nature, but we were so frustrated with how we kept hitting roadblocks,” said MEA President Cheryl Lashley. “They [the board] truly were not bargaining. They didn’t think we were strong enough to continue to say no. This isn’t fair… They had the money; they just weren’t going to spend it on teachers. They pushed us into the decision [to strike].”
The strike began on February 6. Classes continued as union members and supporters picketed outside in winter weather. To compensate for the lack of willing substitutes in Oregon, the school board hired teachers from as far away as New York and Texas. Substitutes received meal stipends, compensation for travel and lodging, and above-average wages.

Students reported being moved to crowded classrooms and expected to follow canned, low-quality lesson plans. Attendance plummeted; on the day students organized a walkout to support teachers, the high schools reported attendance rates between 16 and 36%. The school board needed to increase attendance or risk losing some state funding.

Mainstream media coverage presented information without the context needed for understanding, and included misleading quotes from school board members about the contract offer. The Medford Mail Tribune newspaper published two op-eds attacking the MEA before agreeing to publish an op-ed by the union.

Meanwhile, the same newspaper ran a full-page ad from the school board saying average teacher compensation exceeds $100,000 annually. That figure seems to represent total compensation, including gross pay, health benefits, and payroll taxes. The average take-home pay for MEA members is about $40,000 annually, according to Lashley. The union did not run any ads.

Despite media attacks, community support for the union held strong. Hundreds attended solidarity rallies, and pressure mounted for a settlement.

On February 22, the school board and the union finally reached a three-year agreement. The union won protections for prep time, working hours, and working days, but compromised on compensation. Terms included modest raises in teacher pay and the cost of living adjustment as well as a phase-in for higher health insurance and retirement fund deductions.

These days, life in the Medford School District is back to normal. Teachers are back in their classrooms, and students have returned to school. Collective action was vital for reaching a settlement union members considered fair. “The union is so much stronger than just the bargaining team,” said Lashley. “You don’t win at the table. You have to get everyone involved.”

Community support boosted teachers’ morale and gave them strength to follow through with the strike. Without that support, said Lashley, the victory for Medford teachers would not have been possible.

As school boards across the nation continue to push an agenda of austerity for educators, members of other unions would do well to remember this lesson

Income inequality is growing, and workers around the world continue to struggle for better pay and working conditions. “Everyone deserves fair working conditions and a living wage,” said Lashley. “Education is about giving people the knowledge to make good decisions and stand up for what they believe in […] that’s what we’re fighting for.”