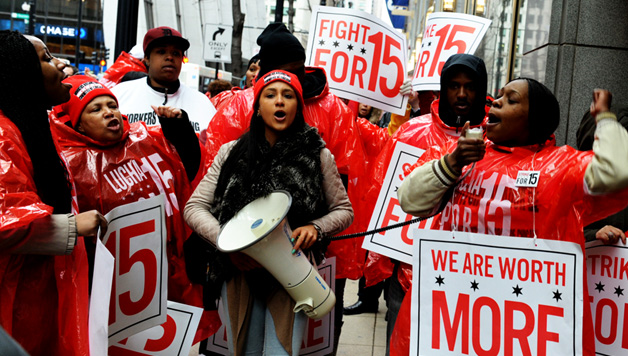 Raising the minimum wage is actually a women’s rights issue. This year’s celebration of International Women’s Day would be incomplete without contextualizing it within the ongoing minimum wage battles across the U.S., which have already won victories in many cities, the largest win hopefully to come from Seattle’s fight for $15/hr. Women like Socialist Seattle City Councilmember Kshama Sawant have arisen as the pillars of the movement, because as in so many other social justice struggles, women will be the ones with the most to gain.

The gender pay gap in the U.S. is a full-blown crisis.  We rank 67th out of 133 countries in pay equity, just below Yemen (World Economic Forum, 2013). Over the course of a lifetime, women will actually need an extra degree in order to earn equal pay to men with a lower degree. This is especially bad news for the 53% of women graduates who are paying a much higher portion of their income towards student loan debt than any typical worker could afford, as opposed to 39% of men in the same situation (American Association of University Women, 2009).

The Seattle metropolitan area, where the fight for $15 is strongest, has the worst gender pay gap of any major metropolitan area in the country (National Partnership For Women & Families). As a result, 23% of Seattle households where women are primary breadwinners fall below the poverty line (U.S. Census Bureau, 2012).

Women have a major stake in building the $15 minimum wage movement, not least because women make up two-thirds of minimum wage workers (National Women’s Law Center, 2012). Women are also 60% of the primary or co-bread winners in their households (thinkprogress.org) and 70% of the restaurant servers that earn a tipped minimum wage of only $2.13/hr on average (Restaurant Opportunities Center United, 2012). So women especially have an interest in fighting for a minimum wage increase that has no tip penalties or other exemptions. (The Seattle mayor and most the city council are seriously considering including a tip penalty and multiple exemptions in the minimum wage ordinance, which Socialist Councilmember Sawant strongly disagrees with.)

A higher national minimum wage would significantly shrink the gender wage gap, and would benefit 13.1 million women. 8.9 million of women would receive a direct benefit; the other 4.2 million would benefit from what the Economic Policy Institute (2012) calls a “spillover effect,” where wages across the board are increased as the wage floor is lifted.

Unfortunately the implementation of a higher minimum wage is by no means guaranteed without a real fight, even after progressive legislation is enacted. One example is the Equal Pay Act of 1963, which most people don’t even know exists because equal pay still remains elusive 50 years after its passage. The Paycheck Fairness Act, meant to strengthen the 1963 legislation, has been twice introduced and twice rejected in Congress.

It has become glaringly clear in recent years that Congress is a place where working-class priorities are ignored. That’s why the minimum wage movement needs to be independent of the two corporate parties, and must be willing to demand more than just legislative reforms. This means pushing beyond the realm of what the owners of capital tell us is possible, because as long as the current global wage system continues, women will never see pay parity.

Just look at how public-sector jobs, which are mostly filled by women, were first to be gutted during the economic recession, and continue to disappear despite this “recovery” period. These middle-income jobs have been replaced by low-wage jobs in the private sector, such as in retail and service work, further emaciating the income base of women. This is a big reason why the gender pay gap has actually widened since the start of this so-called “recovery.” In this crisis-prone system of capitalism, women and people of color will always be the first to suffer when the economy tanks, and jobs, wages, and social services are cut to protect profitability. And they will continue to suffer even after corporate profits have rebounded– unless we join together, organize unions, and demand a living wage through campaigns such as 15Now.org.

At the rate of current efforts to close the gender pay gap, it would be year 2056 before women earned as much as men (Institute for Women’s Policy Research, 2012). Now that it is a Congressional election year, Obama and the Democrats are talking about gradually raising the minimum wage to $10.10 over a few years.  In Seattle Mayor Murray and most the City Council say they want to move toward $15, but the Mayor says he wants it phased in gradually over a series of years, and they are considering including various loopholes and exemptions. Any increase is a step in the right direction, but we need to demand $15 for all workers NOW.

We also need to rethink the viability of an economic structure that cannot provide a decent standard of living for the women that make up half of its population, to say the least. Something different is needed. On this International Women’s Day, women will find that their liberation is inextricably linked not only to the movement for higher wages but also the struggle against the capitalist system of wage-slavery itself.

We need to fundamentally change the structure of our society that allows a corporate elite to super-exploit women and workers of color – a system with a ruling elite that promotes sexism, racism, and homophobia to divide the working class. It is in the interest of women and oppressed groups to unite all workers – women and men, black, brown and white – to fight the capitalist elite who are exploiting and dividing all of us.

In order to guarantee equal pay for equal work and dignified work and pay for all, we need to take the top 500 corporations into public ownership. We need to establish a democratically planned socialist economy where corporations are run by councils of representatives who are paid the same as the average skilled worker – representatives who are elected by the workers and the wider public and subject to recall.

And join Socialist Alternative in fighting for $15, equal rights for all, and a socialist society based on human  need, not corporate  greed.