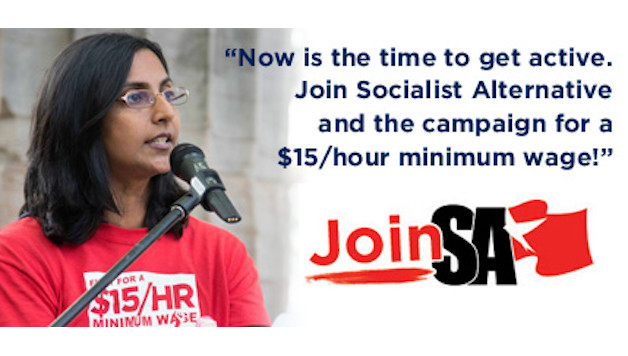 Capitalism in Crisis and the Socialist Alternative

Saturday, Feb. 22
4 p.m.
Portland, Oregon
New Venue: American Federation of Musicians union hall
325 N.E. 20th Avenue, Portland, OR 97232
Mark your calendar
SPEAKER:Ramy Khalil – Campaign Manager for the historic election of Kshama Sawant to Seattle City Council
Capitalism has created a world of unending crisis. Poverty and unemployment, war and oppression, environmental destruction and a bleak future stalk working people and youth.  Globally, mass resistance by working people and youth demanding an alternative have met the remorseless attacks by the richest 1%.
But what’s the alternative?  Under the relentless hammer blows of capitalism, there is growing interest in Socialism. A 2011 poll revealed a majority of those 18-29 years old view socialism favorably. Moreover, in Seattle, Socialist Alternative ran Kshama Sawant for city council and won with nearly 100,000 votes for an open socialist who did not accept a dime in corporate cash.  Since this ground-breaking victory, Socialist Alternative, Kshama Sawant, and others launched 15 Now to fight for a $15/hour minimum wage in Seattle and nationwide.Come consider joining Socialist Alternative and help build a chapter in Portland that can strengthen movements for social and environmental justice!
Tweet
Share
0 Shares

Continuing the Fight for International Socialism

Why You Should Join Socialist Alternative