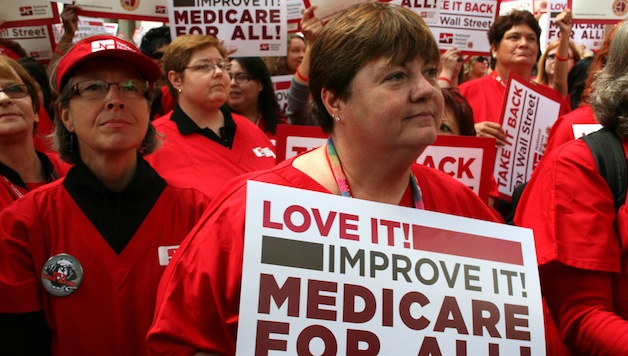 As details of the insurance plans offered under Obama’s new Affordable Care Act became accessible,  many working and poor people have had to realize that this is not the answer to their health insecurities they had hoped for. Designed to convert the 47 million uninsured Americans into paying customers for the insurance and pharmaceutical corporations, Obamacare adds unnecessary costs and layers of complexity for patients and health care providers.

Prices will vary from state to state, depending on what the insurance companies deem profitable in each “market.” In Philadelphia, a single 40-year-old has the choice of 24 plans: nine bronze, seven silver, six gold, and two platinum plans, covering 60%, 70%, 80%, and 90% of health care costs, respectively. The bronze plans have the lowest monthly premiums, of between $238 and $307, but they also have high annual deductibles of $4,000 to $6,350, copays of $20 – $40, and a $6,350 cap on annual out-of-pocket expenses. With a little bad luck and a few new, brand-name drugs, a bronze plan holder could end up with bills totaling $10,000 in a year – Hardly affordable for anyone living paycheck to paycheck in this economy dominated by low-wage, part-time, insecure jobs.

The much-touted subsidies for those making from 100% to 400% of the federal poverty line will take the form of tax credits which can be applied to the cost of premiums. About 20% of Pennsylvania’s 1.4 million uninsured will not qualify for subsidies because Governor Corbett, like about half of all state governors, refused the federal money to expand Medicaid.

More than half of all those who told a national survey that they had difficulty paying, or were totally unable to pay, their medical bills were covered by employer-sponsored plans, (kff.org, 1/7/14). Insurance does not guarantee affordability. It guarantees profits to the insurance corporations.

That’s why socialists call for expanding Medicare to provide coverage for everyone, over and under 65. It would be the cheapest, most effective, most efficient way to provide access to high quality, affordable health care for everyone, as a big first step towards socialized medicine.