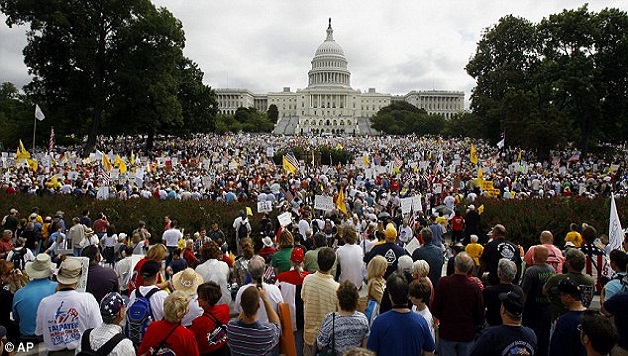 These polls demonstrate that most working-class Americans understand which government policies would serve our interests and that a strong majority of Americans are far more left-wing than the corporate media portrays us. These polls show that the vast majority of ordinary Americans are not represented by either the Republican or Democratic Party. Politicians usually take conservative stances to gain support not from the majority of voters but rather from wealthy donors, corporations, and the media.

• 65% of Americans would “rather President Obama and Congress focus on job creation than deficit reduction.”
(CNN/Opinion Research poll, Sept. 2011)
http://thehill.com/blogs/blog-briefing-room/news/181527-poll-americans-want-obama-congress-to-focus-on-job-creation-rather-than-deficit

• 72% of Americans “favor raising taxes on those making more than $250,000/year to cut the deficit.”
(Washington Post-ABC poll, July 2011) www.cleveland.com/nation/index.ssf/2011/08/democrats_break_their_silence.html

Americans were asked: “To balance the federal budget, which of the following would be the first step you would take?” They responded:

• 68% think the government “must do more to hold corporations accountable for their pollution.”
(NRDC poll, Aug. 2010) www.rawstory.com/rs/2010/08/30/poll-34-americans-regulating-greenhouse-gasses/

• 53% believe “same-sex marriage should be recognized by the law as valid, with the same rights as traditional marriages.”
(Gallup poll, May 2011) www.gallup.com/poll/147662/first-time-majority-americans-favor-legal-gay-marriage.aspx

• The percent of Americans who think “the country has gotten pretty seriously off on the wrong track” has risen to 77%.
(ABC News/Washington Post poll, Sept. 2011) http://www.pollingreport.com/right.htm

• 58% “think the Republicans and Democrats do such a poor job of representing the people that a third party is needed.”
(USA Today Gallup Poll, Aug. 2010)  www.gallup.com/poll/143051/Americans-Renew-Call-Third-Party.aspx

• The highest number of voters in history are registered as independents, 34%.
(Rasmussen Reports, Aug. 2011) www.rasmussenreports.com/public_content/politics/mood_of_america/partisan_trends

• Only 52% of Americans react favorably to the word “capitalism,” while 29% react favorably to the word “socialism.” Among 18-30 year olds, supporters of socialism and capitalism are evenly divided at 43% each! Support for socialism is dramatically higher among women, blacks, and people who make less than $30,000/year. Interest in socialism has grown since the economic crisis began in 2008 in spite of the constant barrage of propaganda against socialism from the media and politicians.
(Pew Research Center poll, May 2010) http://people-press.org/2010/05/04/socialism-not-so-negative-capitalism-not-so-positive/

These polls demonstrate that a workers’ party or left-wing independent candidates could be quite popular and could raise workers’ consciousness even more. As events politicize and radicalize people, we need to get the civil rights, anti-war, environmental, and especially the powerful labor organizations to fund and mobilize support for independent candidates and a new party.