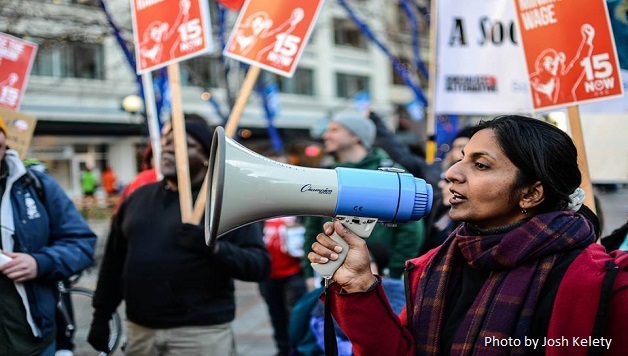 My brothers and sisters,

Socialist Alternative was the organizational backbone behind my recent election victory in Seattle, when I became the first Socialist elected to the city council of a major U.S. city in decades.  This historic breakthrough has attracted thousands of new supporters to our activist organization, Socialist Alternative.  As a result, I am thrilled to announce today that we are launching a new, much more dynamic website at www.SocialistAlternative.org.

All across the world, from Egypt to Brazil and from South Africa to Turkey, mass protests and occupations have erupted against inequality, budget cuts to social services, and environmental devastation.  2014 has only just begun, and already the fight for a $15/hour minimum wage, which Socialist Alternative is playing a leading role in, is spreading like wildfire across the U.S.

As struggles develop, we cannot trust the corporate owned media to honestly report the facts or tell the full story.  Most media outlets are owned by a handful of corporations who are raking in obscene profits from low wages, unsafe working conditions, and weak regulations.  SocialistAlternative.org will be an invaluable resource that will not only be a voice for our side, analyzing the struggles of the 99%, but also provide ideas for how to take social justice movements forward to victory – toward a socialist society based on equality, genuine democracy, and environmental sustainability.

Even though Socialist Alternative and I have no corporate sponsors, we are making real progress by relying on the grassroots organizing and financial support of working-class people committed to building a political alternative.  Check out our new website, and get involved by joining our organization and donating today. You can help us expand our coverage, win the fight for $15, and make even greater strides toward a better world.