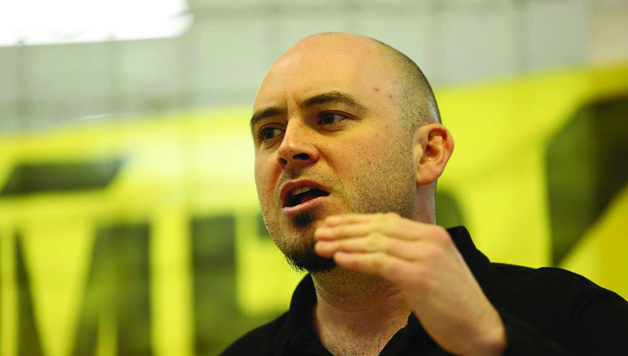 The Socialist Alternative campaigns of Kshama Sawant and Ty Moore stood out nationally as “the two most high profile and exciting candidacies” of left independents in 2013, according to Bard Professor John Halle in CounterPunch.org (11/7/2013).

With bold demands to raise up working-class communities and a clear socialist profile, Ty Moore’s campaign in Minneapolis built a powerful coalition of labor and community organizations, including the SEIU MN State Council, Occupy Homes, the Green Party, immigrant rights organizers, and neighborhood leaders. In a six-way race using ranked-choice voting, Moore lost by only 229 votes, with 42% of the total votes against 47% for the Democratic Party candidate.

“I’ve organized a lot of election campaigns,” said Brian Elliott, Executive Director of the SEIU MN State Council. “The team around Ty’s campaign put together something amazing, a model of how to build a volunteer-driven grassroots challenge to big business politics.” Since August, the campaign mobilized over 150 volunteers, culminating in a final Get Out the Vote effort of 70 volunteers per day, who knocked on 24,000 doors over the last four days leading up to the election.

The dynamic grassroots coalition supporting Ty Moore campaigned for a $15/hour minimum wage, a moratorium on foreclosures, taxing the rich to fund basic services, and an end to corporate welfare projects.

In a public letter published in the three main Spanish language papers, twenty prominent Latino community leaders signed a letter supporting Ty Moore, pointing out that “he is the only candidate with a platform to advance immigrant rights at a city level,” including a moratorium on deportations and voting rights for all residents in city elections, regardless of immigration status. Latino support for Moore was especially significant because the Democratic Party candidate, Alondra Cano, campaigned heavily on her immigrant background.

Our main opponent, the Democratic Party candidate, moved sharply to the left in response to the echo our message received in Ward 9. At the same time, she appealed for support from the political establishment. In his analysis of Socialist Alternative’s campaigns, Prof. Halle reflected on this exact contradiction, writing that “strong Third Party challenges have shown, as did Occupy Wall Street two years ago, that they can force a shift in the political agenda, requiring Democrats to get on board or expose themselves as the servants of capital which their business model requires them to be.”

The Ty Moore campaign’s strong showing indicates the huge potential for a socialist to win a seat in a corporate-dominated election process on a platform of demands around working-class issues. Initial coverage of the results has elevated the national conversation around future initiatives to channel the post-Occupy, anti-party mood into strong third-party challenges to corporate politics.

The Democratic Party establishment dismissed our campaign until the final weeks, when they recognized we might win and mobilized heavily to defeat us. In particular, backed by Occupy Homes, our campaign was widely linked to the struggle against foreclosures and police evictions.

In a direct attack, sheriffs executed a 5 a.m. election day raid on Jaymie Kelly, a lifetime Ward 9 resident whose high-profile struggle against eviction was a central feature of our campaign. Sheriffs responded in less than 24 hours after posting the writ to evict Kelly, a very public supporter, in a politically motivated attempt to send a message of intimidation and to disrupt our election day efforts to get out the vote.

The fear our campaign registered in the establishment was seen when the National Association of Realtors (NAR), a major corporate PAC with close ties to Wall Street, sent two mailers and conducted robo-calls to every resident in Ward 9. NAR spent an estimated $12,000 in support of Moore’s opponent, who didn’t distance herself from the corporate interference. The intervention of NAR into our local elections indicates that Ty Moore’s candidacy, in demanding that the city use every tool at its disposal to alleviate the foreclosure crisis, was seen as a threat to the industry’s future profits.

NAR is a major corporate lobby which spent $64 million in 2012 to influence and skew elections. NAR supports candidates from both corporate parties, including Ted Cruz and Michele Bachmann. Across the country, NAR has fought efforts to stop foreclosures, most recently in a crusade against the city of Richmond, CA. The Green mayor of Richmond is using eminent domain to buy up underwater mortgages and reduce homeowners’ principal to fair market value.

NAR and the big banks swiftly responded with a lawsuit and a major public relations campaign to defeat the Richmond plan and to discourage other cities from using eminent domain as a solution to fight back. The lawsuit is just another of the myriad examples of Wall Street’s tactics used to avoid responsibility for the effects of the economic crisis.

The mayor and top leaders in the legislature organized fundraisers for Cano. Voters received robo-calls from Senator Al Franken. Keith Ellison, chair of the Congressional Progressive Caucus, and other party leaders held a rally on the eve of the election. And yet, the Ty Moore campaign raised $55,000, out-fundraising Alondra Cano three to one in the final two months, in a swell of donations from community supporters. This was achieved while refusing any corporate donations. But the combined weight of the Democratic Party machine and the NAR intervention mobilized the dwindling Democratic Party base and secured Cano a narrow majority on election day.

“We are confident that a simple poll at the doorsteps of Ward 9 would have given us a solid majority,” said Kelly Bellin, Socialist Alternative member and manager for the Ty Moore campaign. “We talked to nearly 5,000 registered voters in Ward 9. Our supporters outnumbered our opponents’ by a two to one margin. We pushed Ward 9 turnout up to 33%, higher than the citywide average. Unfortunately, we were not able to decisively break through the demoralization that most working-class people feel toward official politics, which for so long has only delivered disappointment and betrayals. In the end, the wealthier base of the Democrats showed up and we didn’t bring out enough fresh voters to win this thing.”

However, getting as close as we did to winning the seat in Minneapolis, along with the victory of Kshama Sawant in Seattle, will send shock waves through the political elite and serve as a baseline achievement in the struggle to build a new party for the working class. The support we won will enable us to ramp up struggles on the issues identified by the Moore campaign and to expand our campaign to build an independent political movement to represent the 99% in Minneapolis.