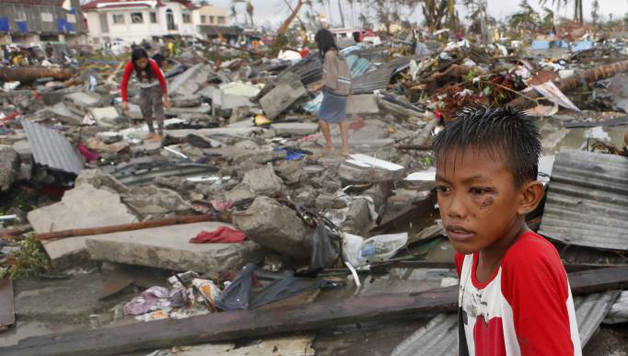 Thousands killed and 11 million affected by strongest storm ever

Dikang is a member of Socialist Action (CWI in Hong Kong) Typhoon Haiyan (‘Yolanda’ in the Philippines) has caused destruction on a massive scale. This storm was three times more powerful than Hurricane Katrina, which killed 1,400 people in the United States in 2005. Winds that ripped into the eastern Philippines on Friday 7 November were as fast as a bullet train – up to 275 kilometres per hour. The energy generated by this massive storm was 10 times more powerful than the Hiroshima atomic bomb. Most deaths have been caused by surging seawater, some waves reportedly as high as a two-story building, with similar effects to a tsunami, flattening houses and drowning hundreds of people.

The confirmed death toll is 2,344 so far, and the government has lowered earlier estimates of 10,000 fatalities, but the true scale of the disaster may not be known for weeks. More than 11 million people are affected and around 673,000 displaced according to the UN. The scale of the humanitarian disaster – with shortages of food, drink and shelter – is colossal. The risk of outbreaks of disease is high, with corpses strewn everywhere and contaminated water supplies. Health experts say 12,000 babies, whose health will be at risk, will be born in the disaster zone in the coming month. The Philippines, with its 7,107 islands, is the most disaster prone country in the world. It is hit by around 20 typhoons every year, as a result of its geography, surrounded by great expanses of warm water that fuel the build up of tropical storms. Typhoon Bopha killed more than 1,100 people last year. In October, the island of Bohol was struck by a 7.2 magnitude earthquake that claimed 222 lives, the deadliest in the Philippines for a quarter century.

The areas worst hit by Haiyan are the islands of Samar and Leyte. In Leyte’s capital city of Tacloban there are reports of corpses hanging from trees and piled in heaps in the streets. Some towns in Leyte province have been almost completely destroyed. Widespread looting of shops and armed clashes between security forces and armed groups has begun. The President, Benigno Aquino III, has hinted that martial law may be declared in the province.

The ruling elite, as in all such catastrophes, tries to win public support and deflect criticism by appealing for unity in the face of adversity. There are many heroic examples of ordinary people helping each other, as in other disasters, which is a natural human instinct. At the same time, political and economic mismanagement, and the capitalist elite’s plundering of resources, have clearly magnified the scale of this disaster.

Poverty, poor quality construction and inadequate infrastructure have all made matters worse. Man-made climate change is said to increase the ferocity of cyclones and other extreme weather phenomena, although this is harder to quantify. The country’s remote provinces have too few roads, which hampers relief efforts. The Philippines has the lowest proportion of paved roads in the whole of south-east Asia. It also ranks bottom for electrification.

The makeshift nature of many houses had no chance against such a force of nature while pictures show solid mansions of the rich still standing. A third of Tacloban city’s homes were made of wood, and one in seven had grass roofs. The city’s population has tripled to 221,000 people in the past four decades, but infrastructure and investment have been neglected. The mayor of Tacloban, Albert Romualdez, is the nephew of Imelda Marcos – the late dictator’s widow. This is the legacy of imperialism and capitalism in the Philippines, with capitalist global agencies like the IMF and WTO steering the country’s economic policy for decades, allowing a small super-wealthy elite to monopolise its resources. The Filipino capitalists are well known as the most corrupt in the region. The issue of so-called “pork barrel” politics has recently triggered big protests in the country. Many of the country’s former presidents (like Marcos, but not only him) were notoriously corrupt. An investigation is currently ongoing into several senators and former congressmen for stealing public funds through a system of phony NGOs in order to extend their power bases.

This means that although the economy is currently growing faster than China’s, with quarterly GDP growth of 7.8 %, the benefits never reach the most needy. This is the law of capitalism!

The Haiyan disaster has of course caused millions of anxious phone calls from the legion of overseas Filipino migrant workers, whose remittances are the main buffer between their families at home and absolute poverty. They number over ten million, more than 10 per cent of the country’s population of 92 million.

US ‘pivots’ into the Philippines

US Imperialism, which lost its military bases in the Philippines in the early 1990s, has been quick to jump into this crisis. The Pentagon has ordered several navy ships from Japan and Hong Kong into the disaster zone including the nuclear-powered aircraft carrier USS George Washington. This seems like a show of force rather than real assistance. The US military, which two years ago unveiled a military ‘pivot’ to Asia, is hoping to derive strategic advantage from the disaster at the expense of the Chinese regime, which has clashed with Aquino’s government over disputed “territories” – actually rocks – in the South China Sea (called the West Philippines Sea by the Philippines government). At bottom these disputes are about oil and energy reserves. The US is pushing for a new military treaty with the Philippines, which could see its troops re-stationed there, and this is a major factor behind its response to the Haiyan disaster.

It is clear that more destructive outbreaks of extreme weather can be expected given a link to climate change. Global warming caused by the build up of carbon dioxide and other gases that trap heat in the atmosphere, widens the gap between sea and air temperatures, which in turn fuels the formation of cyclones. Rising sea levels increase the risk of flooding putting tens of millions more people at risk especially in Asia.

Haiyan struck just days before the Warsaw Climate Conference got underway, the latest in a string of UN climate meetings that have mostly ended as complete and embarrassing failures. “What my country is going through as a result of this extreme climate event is madness; the climate crisis is madness,” said Yeb Sano, the chief representative of the Philippines at the conference.

He stunned other delegates by announcing a hunger strike, until there is “meaningful progress” towards a climate deal. If he is serious, he should start planning his funeral, because unfortunately the leaders of world capitalism are not capable of finding a real solution – they would need to abolish their toxic economic system. That is not on the cards, and therefore the task falls to the rest of us, the mass of ordinary working people, to build a mass socialist movement to rescue the planet from capitalism.