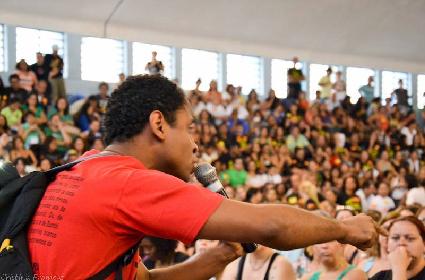 Mariana Cristina is a member of LSR (CWI in Brazil), Rio de Janeiro

The people no longer believe this farce! The fight continues, tomorrow it will be even bigger!

After the massive mobilizations that took place all over Brazil in June , the struggles did not cease. Besides land occupations in the countryside and the student and youth mobilizations and struggles in the cities for free transport, the unions convened, in July and August, two unified national actions of 24 hours including stoppages, strikes and the blocking of major highways.

Various categories of workers have also carried out all-out strikes over wages and working conditions. The main strikes were among postal workers, the banks at national level, education professionals in several states, as well as many other sectors.

Right now, the oil workers, in their fight against the privatization of the oil field in Libras, are engaged in the most important national strike in this sector since the Cardoso government sent the army to repress the refineries occupied by the workers in the great strike of 1995.

Amid all these struggles, one of the main focusses for the mobilization of the working class in Brazil is in the State of Rio de Janeiro. Here the education workers have been on strike for more than two months. They have been directly confronting the governor and the mayor of the city, in massive demonstrations and with tremendous popular support. It is the biggest strike in the education sector in the last 20 years. More than 80 % of the sector is paralyzed.

In state schools, among the main demands are for the right of teachers to work in only one school, a reduction in the number of students per class, a wage increase of 19 % to compensate for lost wages, the guarantee of one third of the workload being allocated for extracurricular activities, the election of directors, the end of meritocracy, and other demands.

In the case of Rio, the trade union of education workers, SEPE, demands the reopening of negotiations with the municipal government and the repeal of the Career Plan approved by the City Council.

In this struggle, education workers who are members LSR (CWI in Brazil) have initiated and led the union activists’ collective “Luta Educadora”. This won a majority in the workers’ assemblies against the proposal to end the strike advocated by the board of the union on numerous occasions.

Luciano Barboza, teacher and member of LSR, adressing an assembly in Rio on 15 october

Although today this union is led by the left (Sections of PSOL and the PSTU), there is a strong bureaucracy within it. These are the same people and political groups who have run the organization for 20 years, and are in reality very detached from the rank and file.

The Councillors of the city of Rio approved a career plan that does not correspond to the interests of the education professionals. This was despite thousands of people protesting against it outside of the council offices.The police, in trying to disperse the protesters and ensure that the session of the council chamber was not interrupted, used a constant and abundant flood of tear gas. But minutes after the effect of the gas would decrease, the workers would return and resist, all day in front of the chamber until the end of the session.

The struggle of the teachers caught the ruling class by surprise. Since the strike began, the participation and the support among the general population has increased massively. Recent surveys indicated that 86 % of the population agree with the strike in education. Actions have become more constant and massive, bringing more than 20,000 onto the streets every week – reaching 50,000 on 7 October. The repressive reaction from the police, aimed at criminalizing protesters and dispersing the struggle, has only intensified the solidarity and strength of the movement.

On 15 October, officially “teachers’ day”, over one hundred thousand people – youth, and workers from various categories – were united in favour of education, taking over Rio Branco avenue from beginning to end.

The pressure of the strike and the popular solidarity has pushed the judiciary to take a stand against the cuts in the wages of striking teachers. The court also overturned the revocation of the license of the union SEPE, initiated by the government.

On the protest on 15 October, police repression was once again carried out in the streets of the centre of Rio de Janeiro. The police dismantled the camp which had been permanently in front of the City Council for weeks. Around 200 people were arrested, randomly chosen to serve as an example. They were illegally taken to neighborhoods distant from the centre and trapped in different locations, to make access to them by lawyers more difficult. All were framed through a newly-created law to combat organized crime. The new law, passed in September in the Legislative Assembly of Rio de Janeiro, toughens punishment for protesters and provides much higher penalties for “crimes” such as the use of masks in street protests.

A member of the Collective “Estudante em Construção” built by youth activists from LSR, Bruno Liberato, was arrested on that day and only released 24 hours later.

Several search warrants and arrests were issued against activists. The houses of several activists were searched and several computers were seized. This policy of criminalization of social movements and the criminalization of poverty is an old policy pursued by the Governor, Sergio Cabral. We also saw this in the case of an assistant bricklayer, Amarildo, tortured and murdered by 13 policemen in a so-called “Pacification Police Unit” in the favela of Rocinha.

Cabral was one of the governors elected with the highest votes in the country in the last election (he was re-elected with 66 % of the vote), but now he is the governor with the lowest approval rating – on only 12 %. He has been exposed, by favouring big businesses and entrepreneurs such as Eike Batista; by his abuses of power such as the use of a public helicopter to carry his family. He is also known for violent and authoritarian excesses, through the criminalization of poverty, and the scrapping of public education and health.

All these attacks on the population made by the government headed by Cabral also served as a trigger for the June struggles. These extended into July, August and up until now,. He has been pushed up against the wall and forced to reverse some of his previous policies.

The city council of Rio was occupied for weeks by protesters to demand the actual functioning of a Parliamentary Commission of Inquiry on public transport. Demonstrations demanding the ousting of Cabral were organised on a daily basis, including “Occupy Cabral” – an encampment outside his house.

The political crisis facing the Cabral government and the Military Police are worsening, especially after the increased crackdown on protesters. The governor’s response to the struggles has been to repress in order to intimidate, and to prevent the youth to organise. Increasingly heavy police weaponry, hundreds of young people being tried for “conspiracy”, persecution and sequestration of leaders…A clear stance of criminalising social movements.

The struggles that took place during the Confederations Cup of 2013, and the days of struggle initiated in June, are an anticipation of what will occur during the 2014 World Cup and the 2016 Olympics. These mega-events will accentuate the contradictions between the illusions of a “great and prosperous Brazil” and the reality of the precarious quality of life of the working class and the poor.

This contradiction brings the potential for further struggles. The repression of demonstrations during the World Cup will be even greater. What we are seeing today in Rio de Janeiro will be extended to the whole country in the next period.
Tweet
Share
Pin
Share
0 Shares