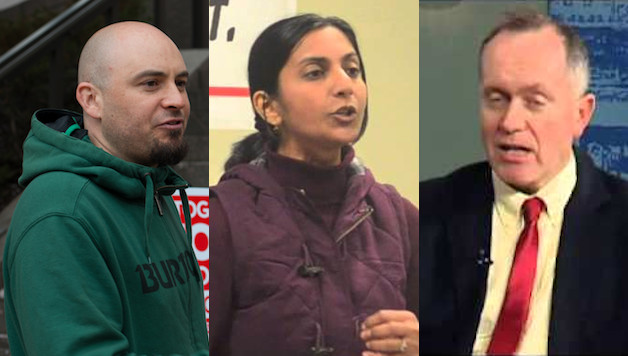 As budget cuts continue, it is local politicians who carry out the dictates of the corporate agenda and strip public services. While fighting these attacks in the street, we also need to challenge local politicians in elections to give working people political representation.

Socialist Alternative candidates are running for city council in Boston, Minneapolis, and Seattle. Each candidate is running on the basis of building movements and supporting struggles, and each candidate is running as an open socialist, independent of the Democrats and Republicans. They are running to help popularize and build support for independent working class politics and bring pressure to bear on their local political establishments.

Union leaderships, liberal leftists, and others argue that these and similar campaigns for local office would have more effect if they happened within the Democratic Party. They argue that, given that many local races are officially non-partisan, it is an unnecessary electoral liability to run openly outside of the Democratic Party as a Socialist Alternative candidate.

Why not seek the endorsement of the various local Democratic Party groups? These groups are relatively democratic (and usually largely progressive in their political composition), their endorsement makes a big difference in a candidate’s electability as they can mobilize activists in each neighborhood, and their endorsement carries weight with a section of people who regularly vote in local elections.

Local Democratic Party groups exist to keep alive a mass basis for aspiring corporate politicians. They thrive on nepotism; joining a local Democratic Party ward is not so much a political decision as a career or business decision: It opens doors. These people oppose candidates running independent of the Democratic Party because it is a threat to their personal connections to candidates who, in return for support, help with jobs, licenses, and other perks.

A Tool of Big Business

On a national scale, Obama and the Democratic Party continue to work lockstep with their corporate backers, pushing attacks on Social Security, Medicare, and public education, deporting immigrants (more than any other president in history), and carving out space for profits in health care.

In lockstep with national politicians, governors and mayors of both parties carry out the most immediately felt cuts. In Massachusetts, Democratic Governor Deval Patrick bragged about getting unions to take wage cuts, (Boston Globe, 12/18/2009).

On the local level, the majority of districts are effectively one-party monopolies. Most big cities such as Minneapolis, Seattle and Boston are completely dominated by the Democratic Party, while other district elections are decided in Republican primaries. In Seattle, a Republican has not been elected to the City Council since 1991!

When union members, activists, and progressives step forward as candidates or decide they should challenge the status quo in Democratic primaries, they run into a bureaucratic old boys’ network which fights any change and threatens newcomers: “If you don’t play by our rules, we’ll fight you on everything.”

Still, some working-class fighters, including union members and progressive activists, are sometimes able to win elections to local positions as Democrats. While Socialist Alternative does not endorse Democrats, we are willing to work with any genuine working-class fighters on any issue that benefits the working class. However, to those progressive activists within the Democratic Party, we appeal: Break from the trap of the Democratic Party which opposes you at every turn and work with us to build a new party independent of corporate money and machine politics.

Socialist Alternative runs candidates openly as socialists to give voice to the interests of working people and bring the maximum pressure to bear on the political establishment to concede to the demands of workers and young people.

To do this requires that candidates stand out from the Democrats and the corporate agenda. Even in cities such as Boston and Seattle, where the history of one-party domination has resulted in “non-partisan” local races, meaning that party affiliations are not listed on the ballot, it is necessary to run completely independently of the Democratic Party machines which totally run these cities in the interests of the rich and powerful.

If a campaign is truly about building movements, it must be serious about its program and building organizations. In Minneapolis, Ty Moore is a well-known activist in Occupy Homes and is using his campaign to bring further attention to the campaign, explicitly challenging the politicians whom Occupy Homes is running up against in its struggles against foreclosures and evictions.

Boston: A Case Study of a One-Party City

For twenty years, Boston Mayor Thomas Menino held power using a strategy of rewarding friends and ruthlessly punishing opponents. In 2009, he was challenged by progressive Democrat Sam Yoon, who, since losing that bid, had to leave Boston to find work, complaining that he was “radioactive” to local potential employers, all of whom feared retaliation from Menino should they hire his opponent, (Boston Phoenix, 6/27/2010).

Boston is a solidly Democratic Party-controlled city. The Democratic Party machine is organized by neighborhood and ward and controls the money and human resources necessary to get any politician elected in the city. However, this power is not vested in the local branches of the organization – but in the party bosses, over the last 20 years, by Mayor Tom Menino.

The Occupy movement pushed many young people into action for the first time. It exposed the anger around inequality in U.S. society and repopularized activism and fighting back against injustice. Issues such as student debt, foreclosures, environmental destruction, the erosion of public schools, the defunding of public transportation, living wages, and other working-class concerns were exposed and fought on.

Three Socialist Alternative candidates are running in city council elections in 2013. These campaigns are a tool to take a step towards the political expression of the struggles on issues that arose during Occupy and to raise the ideas of socialism to thousands more people.

No working-class gain has ever been won without a fight. The weekend, the eroding 40-hour workweek, employer-provided health insurance, public schooling, an end to Jim Crow laws: all have been won by working people and youth through mass struggle. Only a strategy that involves the maximum number of people in demonstrations, mass civil disobedience, strikes, and occupations can defend and, through struggle, improve our living standards.

Running candidates from these struggles is a useful tactic for building movements. Using election campaigns and, if successful, an elected office as a platform can help spread the movement to greater numbers, and also support the movement in down times.

In Ireland, Joe Higgins was initially elected as an open socialist to a local seat as a representative from the anti-water charges campaign, when the Irish government was trying to shift the tax burden further onto working people. He has since been elected and re-elected to the Dail (parliament) as a member of the Socialist Party (CWI, Ireland) on the basis of his continued fighting on this and other campaigns. His position and his outspoken support for struggles have brought huge publicity to movements.

Socialist Alternative advocates for the creation of a new political party, a party based on social movements and working people, while rejecting corporate money. Such a party would need to be democratically controlled by its membership and allow different left-wing trends to work together within it.

As long as working people and youth are paying attention to elections, activists need to actively engage in this (limited) arena, but on the basis of campaigning for the independent interests of the working class and all those held down by capitalism. The Democratic Party has the most rotten record of attacks, both on the local and national levels, and it should be discarded as a tool for fighting the 1%.

By building the strongest possible independent left-wing challenge to the Democrats in the 2013 local elections, we can help prepare the way for the creation of a new party that would represent the interests of the working class and all those fighting big business. Such a party, alongside mass movements on the streets, would represent a massive step toward defeating the forces of austerity and capitalism.