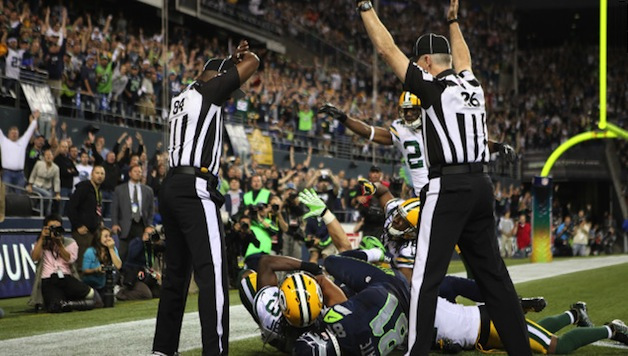 The NFL began the second week of the regular season by announcing they would be using so-called “replacement refs” through at the least the fifth week of the season. As fans and commentators discussed the blown calls and questionable officiating, the NFL seemed to be hunkering down for the long haul. Unfortunately for fans, the referee lockout does not look to be ending soon.

Why are the refs locked out? What is it all about? The owners would have us believe that the National Football League Referee Association is too greedy. Nothing could be further from the truth. NFL refs are the only major sports officials in North America who work part time. The 119 refs all have off-season jobs.

The major contention point is the pension system. Currently the referees get a defined benefit pension program where they are guaranteed a set amount of money after they retire. The owners are insisting that the refs accept a 401K contributions system instead therefore leaving their retirement funds susceptible to the unpredictable stock market. As millions of Americans have learned in recent years, this is a recipe for disaster.

All told, the refs are asking for wage, benefit, and pension increases that would amount to $16 million over the course of a new five-year contract. That number may seem like a lot, but that averages out to only about $500,000 per team. That is nothing compared to the projected revenue that the owners and the NFL are expected to see. This year alone revenue is expected to top $9 billion, with that increasing closer to $14 billion in five years’ time.

Player safety is the most damning issue with the owners locking out the referees. Nearly 2,000 former players have brought a class action lawsuit against the NFL charging the league with not doing enough to protect players from concussions.

Largely as a result of the class action lawsuit the NFL has put a point of emphasis on preventing concussions and recognizing the symptoms of concussions so the players can be treated to prevent long-term damage. One part of this new emphasis was training refs how to recognize the symptoms and how to be “first responders” on the field should any emergency arise.

They have received special training in order to do so. The scab refs that the NFL is using now have not received that specialized training. The NFL and the owners’ claim that they put players’ safety first was something people questioned already. But it is even more laughable when they employ scabs who have very little training in how to maintain a safe work environment for the players.

Much like the 1% in society in general, the billionaire owners of the NFL see unions as an impediment to their unbridled profit-making. Locking out the referees of the NFLRA makes sense in their worldview. Unfortunately, in doing so they are destroying the integrity of the game and are putting hundreds of players at risk for serious injury every week.

Racism, Sexism, and Transphobia at the 2021 Summer Olympics