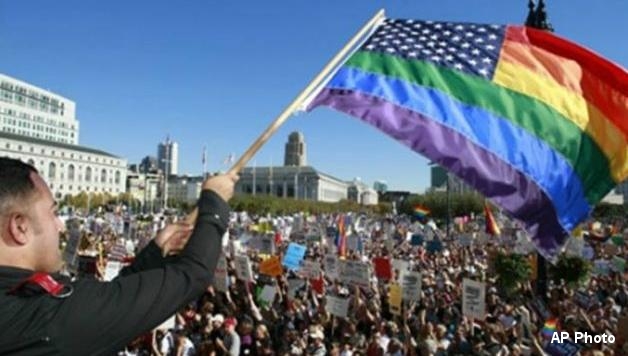 Yesterday, in a historic victory for the gay and lesbian rights movement, President Obama came out in favor of same-sex marriage rights. This is the first time that a President of the United States has publicly stated his support for equal marriage rights for gays and lesbians, and comes on the heels of a number of other legislative victories for lesbian, gay, bisexual, transgender, and queer (LGBTQ) people.

With Obama and other leading figures in the Democratic Party now openly embracing same-sex marriage rights, popular support for LGBTQ equality is set to increase further. However, this should not be a moment for the activist movement to sit back and wait for the politicians to act on their newfound convictions. Instead, its vital that activists seize this moment to urgently press forward the struggle for full legal quality for LGBTQ people at the federal, state, and local levels. We must make clear that words are not enough, and step up our calls for real policy changes to end the continuing violence and legalized persecution facing LGBTQ people.

The Democratic Party and leaders of affiliated organizations, such as the Human Rights Campaign and MoveOn, are attempting to portray Obama’s change in his public position as a true act of political courage. It is clear, however, that this change is a politically calculated move designed to boost his own re-election campaign and those of other Democratic politicians this election year.

Public support for equal rights for LGBTQ people has been surging in recent years. In 2004, a Pew Poll showed 60% opposition to same-sex marriage, but this week Pew released a new poll showing only 43% in opposition. Crucially, a new Gallup poll from May 3-6, 2012, shows that independent swing voters favor same-sex marriage rights by a huge 17% margin.

Obama and the Democratic Party leadership have trailed, not led, shifts in public opinion. Changing public attitudes and Obama’s new stance are overwhelmingly due to the grassroots organizing, militant activism, and greater visibility of LGBTQ people in society. In the past, and often to this day, LGBTQ people who came out of the closet would be disowned by their families, fired from their jobs, arrested, bullied, beaten up, and sometimes even killed. Despite this intense persecution, millions of LGBTQ have defied dominant social norms by coming out of the closet.

Most importantly, the movement organized itself politically, building rallies, boycotts, and protests to demand full equality immediately. In October 2009, for example, activists organized a National Equality March on Washington demanding same-sex marriage rights and full equality under all aspects of the law, which drew at least 150,000 people.

For millions of ordinary people, gay and straight, it has been clear for years, decades in fact, that any couple who wants to get married should have the legal right to do so, regardless of their sexual preference. But it has taken until now, 2012, for the leading Democratic Party politicians to finally say they support marriage equality, only after a majority of Americans came to that conclusion first! Until yesterday, President Obama supported “back of the bus” civil unions rather than full same-sex marriage rights, and many Democratic politicians still refuse to take a stand in favor of full marriage equality.

Both political parties, the Democrats and the Republicans, are also exploiting this wedge issue from different angles for their own electoral gain. While Republican and Democratic politicians argue with each over same-sex marriage and other cultural wedge issues such as abortion and immigration, they are both attempting to divert working-class anger away from unpopular economic policies, such as high gas prices, tax breaks for millionaires, and budget cuts in social programs.