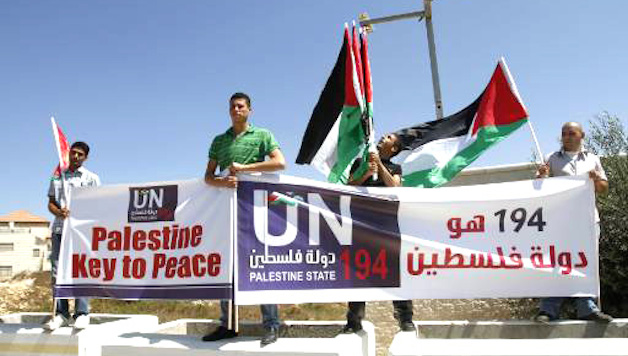 Palestinian representatives intend to ask the United Nations this month to recognize Palestine as a state in the Gaza strip and West Bank. The Palestinian Authority (PA) has been preparing for this symbolic move for two years, including considering a new currency, stamps etc. This preparation has also involved increased taxes and repression however, to placate capitalist critics around the world particularly over demands for greater “law and order.”

After decades of brutal oppression and failed “initiatives” it is understandable that many Palestinians and their supporters welcome the UN vote, as a way to highlight their cause, and hope it can lead towards the eventual realisation of genuine self-determination.

But unfortunately, rightful and sought-after as a genuine Palestinian state is, categorisation as a “state” by the UN will not force the Israeli regime to lift the occupation, remove the blockade of Gaza, stop building Jewish settlements in PA areas and accept a Palestinian state.

There have been hundreds of pro-Palestinian UN resolutions since Israel was formed in 1948, including support for an independent Palestinian state, but successive Israeli leaders have simply ignored them.

Presently the Palestinians are UN observers as a non-UN member “entity.” A two-thirds majority vote in the UN General Assembly can change observer “entity” to observer “state” and enough votes from Africa, Latin America, the Middle East and Asia have been promised to achieve this.

The wording of the resolution that would be put to the assembly is still being negotiated, with some European governments trying to water it down so that they would not have to recognize a Palestinian state on a bilateral level and demanding that the PA subsequently turns immediately to negotiations about land swaps etc with Israel with no preconditions.

An upgrade from observer status to UN membership could only be granted by the UN Security Council, where the U.S. has the power of veto and has vowed to use it to defend the interests of Israeli capitalism (and its own – Obama does not want to upset the strong US pro-Israel lobby in the run up to next year’s US presidential election).

The U.S. has tried to deter the Palestinians from requesting UN membership as it wants to avoid using its veto, fearing the hostile reaction that would follow from the masses across the Arab world and elsewhere.

It has also been trying to stop the UN Assembly vote to recognize a state, or at least to reduce the number of pro-state votes. To try to get the Palestinians to pull back it has echoed the Israeli government’s warning that recognition of a state now would scupper all previous agreements – including the Oslo accords that led to the PA’s creation.

But what have the mass of Palestinians gained from having the PA? The Israeli occupation just continued in another form – a worse form in the case of Gaza since the election of Hamas in 2006.

The U.S. has also threatened to cut its donations to the PA – presently about $600 million a year. The PA leaders may succumb to the pressure to avoid a US veto by not applying for UN membership, but they have so far refused to draw back from asking for recognition as a state.

This turning to the UN – an imperialist dominated body – reflects the bankruptcy of the Palestinian leadership, having failed in their previous strategies and facing a desperate population. They weakly argue that UN recognition will increase their leverage in talks, “open doors” and be a step towards real statehood. They hope that foreign governments will apply more pressure on Israel if Palestine is called an occupied state rather than a territory.

But for the capitalists across the world, a change of terminology will not make a decisive difference that will outweigh their interests in political and economic world relations, including their trade with Israel.

Also, there are few governments that do not fear the effect that Palestinian independence could have on national minorities in their own countries, potentially inspiring them to seek autonomy or separation.

In the meantime, while the hobnobbing, wheeling and dealing goes on among the top diplomats and politicians globally, Palestinians in Gaza and the West Bank face constant deprivation and brutality – including frequent killings by the Israeli army.

Palestinian workers are suffering a 45% unemployment rate in Gaza and 25% in the West Bank and for those in work real wages have fallen by over 30% during the last four years.

With economic growth now slowing in the PA and a drop in aid, a fiscal crisis is setting in and public sector workers have not received full wages for the last two months.

Peace negotiations last year quickly came to nothing as the Israeli government refused to extend a temporary halt on building Jewish settlements in occupied areas.

The Israeli ruling class has never wanted a genuine Palestinian state to exist on its doorstep for a number of reasons, among them the issue of security – it fears that the Palestinians will later challenge Israel militarily. So it has always raised obstacles and minimized concessions.

Leaked diplomatic papers at the start of 2011 showed that the PA leaders have desperately offered almost every concession they could and more, including sacrifices that would be unacceptable to most Palestinians such as giving up most of East Jerusalem – but to no avail.

Present right-wing Israeli prime minister Benjamin Netanyahu has insisted that a Palestinian state would have to be demilitarized, with Israeli forces stationed along the Jordan river effectively encircling the state, and said that the 1967 borders are not acceptable – Israel should have up to 40% of the West Bank and all of Jerusalem.

But pressure is growing from much of the Israeli establishment for talks to resume and renewed attempts at some stage are inevitable, as part of the cycle of bloodshed, stalemate, eruptions of struggle and negotiations that are hallmarks of this conflict.

In recent weeks the foreign ministry, military intelligence, Shin Bet security and Mossad have all said that a return to negotiations would reduce tensions and anger against Israel.

The U.S. Obama administration is also frustrated at the intransigence of the Netanyahu government. Recently retired US secretary of defence Robert Gates, before he stepped down, denounced Netanyahu for “endangering his country by refusing to grapple with Israel’s growing isolation and with the demographic challenges it faces if it keeps control of the West Bank.”

A commentator in the Israeli press noted regarding the U.S.: “Even if the administration casts a veto at the United Nations, the sound of President Barack Obama gritting his teeth will be heard from the North Pole to the South Pole.”

The Israeli ruling class’s “isolation” and feeling of insecurity has been hugely exacerbated by the “Arab spring” uprisings and the problems the U.S. is having in keeping some standing and influence in the region.

Israel’s security arrangements with Egypt are much weaker after the fall of Mubarak; the Israeli embassy in Cairo was stormed by hundreds of attackers on 10 September, the worst incident between the two countries since the Camp David agreement was signed 32 years ago.

Also, the Israeli political leaders have had a major falling-out with Turkey after refusing to apologize for killing Turkish activists on a Gaza-bound aid ship last year. Their status quo with Syria is threatened by the uprising in that country, their enemy Hezbollah has a strengthened position in Lebanon and in the PA areas they did not want to see Fatah forming an alliance with Hamas, as it tentatively did in May.

Moreover, Israeli capitalism has been facing a massive, unprecedented movement in recent weeks of Israeli workers against a severe lack of affordable housing and on many other issues.

If the UN vote on Palestine goes ahead, although largely a gesture, it will bring some welcome publicity to the Palestinians’ plight. Also, it may be accompanied by large Palestinian demonstrations that will start to lay the basis for a new period of mass struggle; Marwan Barghouti, a popular Fatah leader incarcerated in an Israeli jail, has called for mass rallies during the week of the vote.

Mass action is vital to advance the Palestinians’ cause, against the blockade of Gaza, against road blocks, the “security” wall eating into Palestinian land, incursions by the Israeli army, and so on. But it must not be controlled and limited from the top by the leaders of Fatah and Hamas, but organized and controlled democratically by the mass of Palestinian workers themselves.

Alongside mass action, democratic workers’ organizations need to be built that can formulate a programme for victory of the movement. This would need to emphasize that a capitalist Palestine alongside a capitalist Israel would not end poverty and bring security for either state.

Instead, breaking with capitalism and imperialism is essential – calling for two socialist states in a socialist confederation of the region – as the only basis on which workers can solve the issues of land, housing, refugees, economic development, water rights and Jerusalem as a shared capital, to build a decent future for all.

Coronavirus Crisis in Gaza: Pandemic in Conditions of Siege, Poverty and Overcrowding

ABOUT US
Socialist Alternative is a national organization fighting in our workplaces, communities, and campuses against the exploitation and injustices people face every day. We are community activists fighting against budget cuts in public services; we are activists campaigning for a $15 an hour minimum wage and fighting, democratic unions; we are people of all colors speaking out against racism and attacks on immigrants, students organizing against tuition hikes and war, people of all genders fighting sexism and homophobia.
Contact us: info@socialistalternative.org
FOLLOW US
© Socialist Alternative 2020 | All rights reserved
1 Shares
Tweet
Share1