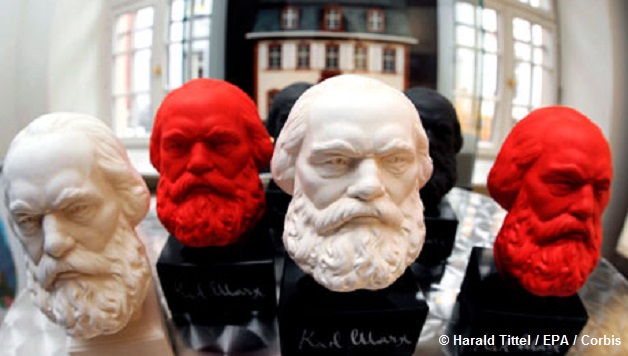 Terry Eagleton’s Why Marx Was Right is a wonderfully written and accessible introduction to the thought of Karl Marx. It is fashionable to dismiss Marxism as “outdated” or “irrelevant” as it pertains to contemporary economic and political problems. Eagleton provides a much needed correction to this ignorant viewpoint.

Eagleton takes the many objections voiced by the enemies of Marxism (e.g. Marxism is “great in theory” but only leads to bloodshed; Marxism is utopian; Marxism reduces everything to economics; Marxism is deterministic, etc.) and demolishes them one by one.

One of the most common assumptions behind neoliberal thought is the denial of society. In this false approach, humans exist as isolated units pursuing their own selfish interests, and the human psyche is a mere depository of self-interest and passions. This mythical outlook further argues that because reason exists as a means to the satisfaction of these passions, the only knowledge that can be concretely discerned is one of self. Therefore, the only proper form of government is a minimalist one that allows the pursuit of these selfish interests with the law existing only to prevent a person from denying another the satisfaction of these egocentric needs.

This is the essence of the neoliberal thought used to justify corporate globalization. In his book, Eagleton does a masterful job of providing a Marxist critique of this thought in language that is clear and without arcane jargon.

For Marx, the notion of an isolated individual existing apart from society is a philosophical fiction. While we do exist as individuals with our unique talents and needs, humans live in a specific historical context with the level of development of society determining the limits of what we can not only accomplish but desire. According to Eagleton,

For Marx, our thought takes shape in the process of working on the world, and this is a material necessity determined by our bodily needs Consciousness is the result of an interaction between ourselves and our material surroundings. It is itself a historical product. Humanity, Marx writes, is established by the material world, since only by engaging with it can we exercise our powers and have their reality confirmed.

The neoliberal notion of the isolated subject is a philosophical myth. Humans are social beings who not only engage with one another, are affected by the social structure of society and also transform nature by production.

Marx explains how human society has moved through different systems of production from the earliest communal primitive societies, to slave societies and feudal society to our present capitalist societies.

Eagleton should be commended for rejecting a narrow, deterministic interpretation of Marxian thought. While Marx is often condemned as a crude materialist who reduces everything to economics, Eagleton argues that this narrow interpretation should be rejected. As aforesaid, humans are social beings who realize their productive capacities through nature. In these capacities, classes form as social groups coalesce around common economic interests and other social, cultural and political factors. For example, today a tiny elite own the huge banks and corporations that dominate our society (the capitalist class), while the vast majority of the population have to work in an economy dominated by these corporations (the working class.)

For Marx, the human desire for freedom leads the economically oppressed classes to agitate for independence from and to overturn the power of their oppressors. It is this class struggle that serves as the engine that drives history forward. According to Eagleton:

The claim that everything for Marx is determined by economics is an absurd oversimplification. What shapes the course of history in his view is class struggle; and classes are not reducible to economic factors. It is true that Marx sees classes for the most part as groups of men and women who occupy the same place in the mode of production. But it is significant that we speak of social classes, not of economic onesClasses do not exist only in coal mines and insurance offices. They are also social formations, communities as much as economic entities. They involve customs, traditions, social institutions, sets of values and habits of thought.

Marxs notion of class contains both economic and social elements. For Marx, the mode of production (today, individual ownership of vast factories and companies) constitutes the predominant forms of organizing labor necessary to produce the goods of society. Under this system, the boss makes the decisions, and the worker has to accept their rules. But Eagleton is careful to point out that Marx had a much broader understanding of labor than simply putting 8 or 10 hours in each day for the boss:

Production is carried on within specific forms of life, and is thus suffused with social meaning. Because labor always signifies, humans being significant (literally, sign-making) animals, it can never be simply a technical or material affair. You may see it as a way of praising God, glorifying the Fatherland or acquiring your beer money. The economic, in short, always presupposes a lot more than itself. It is not just a matter of how the markets are behaving. It concerns the way we become human beings, not just the way we become stockbrokers.

By stressing the social nature of class, we see that Marx rejects the economic reductionism that so many of his critics accuse him of. While the social is an inseparable part of us as humans, Marx is predominantly concerned with the happiness of the individual. For Marx, it is inevitable that humans must labor for both their economic livelihood and personal well-being. Interaction with nature is the common element that is universal to all humans.

Under capitalism, individuals are alienated from the products of their labor. To survive, humans must sell their labor power to others. The products we make are taken away and sold by the capitalist for profit. As a result, most individuals are forced to labor for the enrichment of those in the ruling class rather than for the satisfaction of the needs of working peopleyet it is our labor that is our lifes work and it is our labor that creates all the wealth and makes our society possible. This forms the basis for Marxs concept of alienation. Under capitalism, so much of our humanity is produced for others. We spend so much of our finite lives working for someone else. According to Eagleton, Marx speaks of alienation as the condition in which we forget that history is our own production, and we come to be mastered by it as an alien force. In the productive realm, we grovel before the feet of the capitalist, thanking him for creating jobs, while forgetting that such jobsall jobs, in factwould not exist in the first place without productive human labor. Working people are the producers; the capitalists are the parasites.

In the social realm, humans are judged under capitalism not by the essential human qualities of honor, trust, love, compassion, etc., but by factors such as physical appearance, earning potential, and ingratiation toward those in power. The concept of alienation is best expressed by Marx himself in the Economic and Philosophical Manuscripts:

If you suppose man to be man and his relationship to the world to be a human one, you can only exchange love for love, trust for trust, etcEach of your relationships to manand to naturemust be a definite expression of your real individual life that corresponds to the object of your will.

In the world of capitalism, we are forcedby the threat of hunger and pestilenceto perform different roles for survival, even if these roles go against the grain of who we are as individuals. At work, I have to pretend to like my boss, even though he is an asshole; I have to dress a certain way to satisfy others; I am expected to marry for security rather than for love; I have to go to school and study something marketable, even though Id rather study art and music. In the political realm, I have to choose between two corporate candidates because the electoral system is deliberately rigged to exclude other parties offering a radical solution to societys problems.
It was Marxs project to liberate human creativity and interpersonal relationships from the tyranny of market forces. According to Eagleton,

Marx believes that even our physical senses have become commodified under capitalism, as the body, converted into a mere abstract instrument of production, is unable to savor its own sensuous life. Only through communism could we come to feel our own bodies again. Only then, he argues, can we move beyond a brutally instrumental reason and take delight in the spiritual and aesthetic dimensions of the world.

Obviously, Marxs reference to “communism” has nothing to with the monstrous totalitarian states of the Soviet Union and Eastern Europe, which go against the central concepts of his writings. Instead, it expresses the extension of democracy into all areas of life and the creation of a society which is not dominated by big corporations. Under democratic socialism, working people would collectively own the commanding heights of the economy and through their day-to-day participation in running society would end the alienation of humans caused by this exploitative capitalist system.

For Marx this meant workers organizing into a mass movement based on their interests and building a powerful revolutionary workers party. Only by overthrowing the current late, decadent state of capitalism can humanity hope to find a way out of our current impasse. With capitalisms hunger for exponential growth and unlimited profits realized through the exploitation of Earths finite resources, the need for a revolutionary course of action is essential. Eagletons book provides a wonderful primer on the thought of Karl Marx. Eagleton encourages us to read Marx in light of this brilliant mans deeply held humanism while providing hints at a way forward.