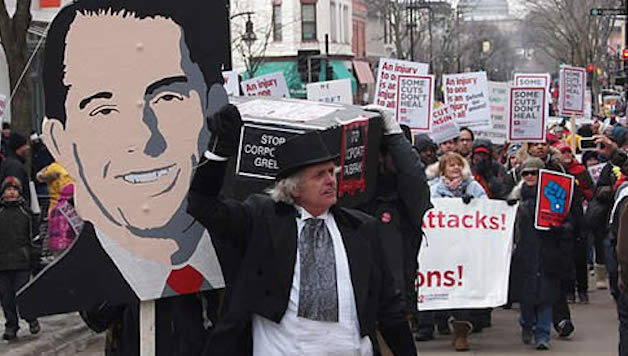 Produced for May 14 Don’t You Dare! Anti-Budget Cuts Rally

We have much to be anguished about and much to celebrate. Governor Walker’s attacks brought us together in an unprecedented solidarity movement. Our movement marks the early stages of a mass movement against the unrelenting tide of attacks on our livelihoods and democratic rights. Having gotten away with causing the Great Recession and getting bailed out for it; Wall Street and Big Business have gone on the offensive. Martin Luther King Jr. once said “a man can’t ride you unless your back is bent.” We have begun to straighten our backs up to say enough is enough!

Our brothers and sisters in Egypt and Tunisia inspired us to stand up. European workers and youth are in revolt against massive attacks on social programs and jobs. Thousands went into the streets to fight NY Mayor Bloomberg’s plan to lay off 6,000 teachers. Teachers and supporters in California have begun “Wisconsin Style” sit-ins at their State Capitol. This is a global movement and its message is clear: “We Won’t Pay for the Bankers Crisis!”

In fact, we are just getting started! But we have to remain vigilant if we are to defeat Scott Walker’s entire agenda of budget cuts, layoffs and attacks on our democratic rights. While the anti-union bill is currently stuck in the courts, Republicans are planning to pass the budget repair bill again if there is no ruling by June. They have also introduced a whole slew of rightwing legislation and draconian budget cuts that will impact the lives of every Wisconsinite.

If the budget repair bill goes into effect our unions will be faced with recertification campaigns, inability to collect dues, and management’s free hand to unilaterally impose their terms on pay, benefits and conditions. Walker’s proposed budget cuts unfairly target our most vulnerable citizens. The anger that is now simmering will reach fever pitch when the law goes into effect and real consequences begin to be felt. The last time we were provoked by legislators ramming through the bill, 150,000 rallied at the Capitol Square determined to stop the attacks. Unfortunately there were was no further stepping up of the struggle towards coordinated strike action, which could have stopped Walker’s agenda in its tracks. We cannot let another opportunity for victory slip from our hands.

We need to be clear that our unions and, working people as a whole, are fighting for survival. This means taking determined action to build a fightback with a bold, winning strategy. We should most certainly punish the Republicans by recalling them, but that should not be the centerpiece of our strategy. It can take a long time to for the recall campaigns to run their course and results maybe mixed while Republicans continue to inflict maximum damage along the way. We need continued mass demonstrations and direct action campaigns as a step towards bolder actions that bring to bear our power as workers and put maximum pressure on the state politicians and their corporate backers. For those in unions, this can mean simple job actions like union button/ t-shirt days and workplace meetings, or more dramatic actions such as slowdowns, strikes and sit-ins. It also means building alliances between labor and the community as we all have a stake in this fight. Our movement needs to be politically independent from politicians and parties that do not consistently advocate for our interests, whether they are Republicans or Democrats.

To be most effective, this movement must also unite working people with the poor, the elderly, women, immigrants, and all others in our society who are under attack by the rich and their politicians. We are only just beginning to fight what will most likely be a long-term war against the unchecked capitalist system that has hammered the poor and working people on every front, especially since the start of the most recent economic crisis. Amidst the massive demonstrations and direct actions that our movement stages, we must not only react to the attacks, but also set forth demands for a “People’s Program” for education, job opportunities, economic security, healthcare and retirement benefits, environmental protection, corporate accountability, government accountability, and consumer protections. We must then take that vision to our Capitol, to the press, to the streets and our workplaces to fight with all our might until victory is ours.

The question of how to move forward should not be left solely to the leaders of our unions or those in elected office. The corporate class has the money to buy influence, but we have a greater power, our numbers! As the demonstrations of this winter illustrate, the political and social power of working people comes from our solidarity and from a willingness to take action. A union is only as strong as its least active member and the people are only a strong as its least engaged citizen. Rank and file workers should organize meetings in workplaces and across unions to discuss demands and strategy. That could be a first step to building wider rank and file networks seeking to mobilize our union structures and to building the broader-based community movement for maximum resistance against Walker’s agenda.

Interview: The Bus Driver Who Refused to Transport #JusticeForGeorgeFloyd Protesters to Prison