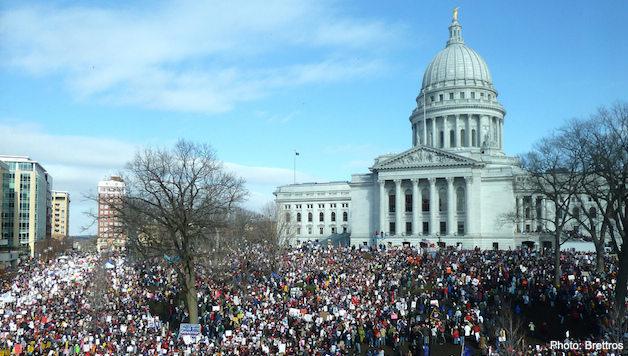 MADISON, WI – Last Saturday saw the largest rally yet in Madison, Wisconsin. Anywhere from 150,000 to 200,000 marched and rallied with their picket signs, chanting their implacable opposition to Governor Walker’s anti-worker agenda. “This is what democracy looks like” has remained the most popular chant, with even car horns honking to the chant’s tune at night. For weeks, the mass movement sparked by Walker’s budget repair bill had tasted its power, creating a festive and confident atmosphere that continued mass demonstrations could force the governor to back off.

Yet, after the Governor unceremoniously rammed through the bill under proceedings of questionable legality, the atmosphere transformed to one of explosive anger. On Wednesday night after everyone heard that the bill passed the State Senate, thousands of workers and students overwhelmed police at the gates of the Capitol and proceeded to re-occupy it. Among many other slogans that could be heard in the Capitol Rotunda, one pointed toward a strategy for victory: “GENERAL STRIKE!”, “GENERAL STRIKE!”

It was almost inevitable that Saturday’s demonstration would be the most massive in the state’s history. By some estimates, the crowd possibly approached 200,000 in a state with only about 5.6 million people. The Capitol Square and all Streets leading up to it were packed thick with crowds, making it nearly impossible to get from one side of any street to the other. There were Madisonians and people from all over Wisconsin and from across the country. There were public and private sector workers, union and non-union, K-12 and college students, even a tractorcade representing farmer-labor solidarity in one of the few states with remnants of the family farmer population. Even people who voted for Walker were there with picket signs expressing regret, having never imagined he would launch such a vicious attack on the basic rights and living standards of the state’s working class.

One married couple held a picket sign that said “Today’s our anniversary and we’re spending it protesting Walker”, showing the enormous willingness of ordinary people to step out of their routines and fight for something extraordinary.

Also back in Madison were the 14 Democratic state senators who fled the state and delaying the bill from going forward for weeks. They received a hero’s welcome by the whole crowd. While recognizing that the Democratic politicians in this case did the correct thing by fleeing the state, Socialist Alternative members have also pointed out that absent a powerful mass protest movement, they would have stayed put and allowed the bill to pass. Furthermore we’ve continued to point out that even though the senators support bargaining rights, they are also asking union members to accept cuts in benefits as well as being ready to accept large budget cuts to education, state healthcare (BadgerCare) and other social programs.

It was as clear as ever that people had had enough and would not have their fighting spirit crushed. At the same time, the angry, yet festive mood was also mixed with confusion and lack of certainty about what the best strategy is to defeat the bill now that it has passed.

Socialist Alternative members were out arguing for the urgent need to organize a one day general strike in the public sector, combined with mass demonstrations and student walkouts that would allow the widest layers of the population to take part. Our leaflets and discussions got an excellent response from many. The need for strike action had become more crystalized among a significant layer of the ranks in the trade unions and the broader public over the previous week. In a private conversation with this writer, even one of the owners of a coffee shop near the Capitol couldn’t fathom why immediate strike action has not already been called. If the union leaders had put out on Wednesday night or Thursday a bold call for strike action the response would have been overwhelmingly solid.

Unfortunately the trade union leadership chose a different route. The Madison Teachers Incorporated told teachers to go to work the next day, ending hopes that the teachers union would lead the way toward strike action as they had in the first week of the struggle through their sickouts. Instead, the AFL-CIO tops and leaders of the individual unions began waging a relentless campaign against strike action, seeking to channel the mood into the campaign to recall Walker and the Republican Senators.

They also struck fear into many ordinary union members that mass strike action would make it easy for Walker to fire them enmasse and privatize the state services. Yet, the union leadership neglected to inform them that he has the capacity to carry out whole sale privatizations now under the bill that passed. In fact, the real risks lie in the danger of the movement being defeated and a number of public sector unions being rapidly smashed if determined strike action is not urgently carried out.

There was a great determination among many in the crowds to participate in the effort to recall Walker and the GOP state senators. Thousands of workers and youth were signing up on Saturday to volunteer for the recall campaign, reflecting their genuine desire to continue fighting Walker’s agenda and not give ground. Socialist Alternative members argued that while Walker and Republicans should absolutely be recalled, the recall strategy by itself is not a strategy for victory in the immediate term.

The recall campaign will take many months if not more than a year, while we face the immediate possibility of whole sale destruction of the public sector unions. A whole slew of public sector union contracts expired on Sunday. Among the provisions that got passed in Walker’s bill was one requiring all the public sector unions to recertify themselves every year in order to remain in existence, with the first re-certification campaign to be forced this April.

The time to act is now. The mood to struggle won’t last long at the scale that it has for the past few weeks. Decisive, mass organized disruption of business as usual is necessary. That is why a one day general strike should be the next step in the struggle, while warning that more escalation will be underway if Walker doesn’t reverse the bill. Strike action has been backed by the South Central Labor Federation of Wisconsin as well as the Madison Firefighters union president Joe Conway and more.

Given these conditions, it is all the more disappointing that the strategy of the union leadership is leading the movement to defeat unless a rapid reversal of course is taken towards strike action. No matter what happens in the immediate struggle however, the widespread political radicalization sparked by this bill is not going to go away. In Wisconsin, Walker’s bill was the spark for years of accumulated anger toward Wall Street, corporate America and their political stooges who bailed them out while giving working people the cold shoulder. Future upsurges in mass struggle are inevitable.

Coming fresh off a picket against a bank that supported Walker (M&I Bank), a sheetmetal worker commented that Walker and the corporate elite “awoke a sleeping giant. Now they’re feeding it breakfast, coffee and steroids”.