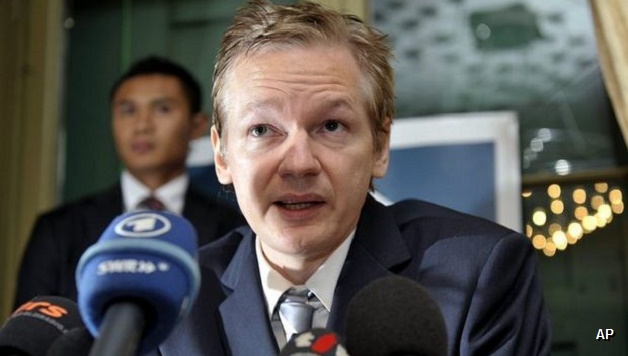 On Tuesday, December 7, Julian Assange, founder of the whistle-blowing organization WikiLeaks, was arrested after turning himself in to the Metropolitan Police Service in London. This is the latest in a series of attacks on the organization. The WikiLeaks website has been subjected to denial-of-service attacks. Corporations such as Amazon and PayPal have cut off services to WikiLeaks, while financial institutions such as MasterCard and Visa have been freezing their accounts. Whistleblower Bradley Manning was arrested in May, and faces a military court-martial and up to 52 years in prison.

WikiLeaks was launched in 2007 and provides secure, anonymous methods for individuals to leak sensitive information to journalists, generally in the form of original source documents. This July brought the massive and unprecedented release of over 90,000 incident records and intelligence reports chronicling the Afghanistan War from 2004 to 2009. On October 23 this was followed up with the even larger release of almost 400,000 classified U.S. documents about the war in Iraq.

Taken as a whole, the nearly 500,000 documents, along with the over 250,000 U.S. diplomatic cables currently being released as a result of the latest “mega-leak” paint a grim picture of a U.S. military that is both violently dishonest and hopelessly bogged down in a bloody, unwinnable crisis. But rather than addressing the issues squarely, the U.S. government has turned its attention to attacking WikiLeaks and preventing further embarrassments.

Some pro-war politicians, such as Peter King and Mitch McConnell have hypocritically accused WikiLeaks of endangering the troops by revealing government secrets. But it is their support for imperial wars in Iraq and Afghanistan that has caused the years of horrific bloodshed in Iraq and Afghanistan. It was the Bush administration that made fallacious claims of the existence of weapons of mass destruction that has resulted in hundreds of thousands of lives being lost in Iraq. Had WikiLeaks existed then, these lies could have been exposed, and countless lives could have been saved.

The latest turn of events came with the arrest of Julian Assange for alleged sex crimes committed in August 2010 in Sweden. The alleged crimes consist of one count of unlawful coercion, two counts of sexual molestation and one count of rape. Assange claims that the dispute arose from incidents of consensual but unprotected sex. However, the prosecution accuses Assange of having unprotected sex with a woman who was asleep. He has been granted bail but remains in custody in London and faces possible extradition to Sweden.

He has also not yet been charged with any crime, and is simply wanted in Sweden for questioning related to the charges. Nonetheless, the International Criminal Police Organization (Interpol) issued a red notice against him, under which he was arrested. Interpol has never shown any interest in violence against women. Considering how many sexual assaults occur with actual charges being pressed, it’s highly suspicious that Interpol would use this case as the basis for an international man-hunt. All this suggests that the British and Swedish governments, under pressure from the U.S., are more interested in launching a witch-hunt against Assange and WikiLeaks than actually taking steps to prevent violence against women.

This is certainly the case with the U.S. government, which is attempting to have Assange extradited to the U.S. for charges of espionage related to the exposures on WikiLeaks. Senator Diane Feinstein (D-CA) has called on Assange to be charged under the Espionage Act of 1917. This is a vaguely-worded law that was instituted under Woodrow Wilson to suppress opposition to World War I. It was notoriously used in the 1918 arrest of socialist activist Eugene Debs, for making an anti-war speech that “obstructed recruiting.”

Feinstein is pressing for a ten-year prison sentence for each leak, which would result in a total sentence of 2,500,000 years in prison. Obama’s Attorney General, Eric Holder said that American officials were conducting “a very serious, active, ongoing investigation that is criminal in nature” into the WikiLeaks releases (New York Times 8 Dec 2010). Senators Joe Lieberman (I-CT), Scott Brown (R-MA) and John Ensign (R-NE), have introduced legislation that would criminalize all media outlets that publish WikiLeaks documents.

These measures represent a serious attack on free speech and freedom of information. As such, they must be unequivocally opposed. Whatever the motivations are behind the Swedish sex crimes charges, the fact that the U.S. government would use these charges as a lever to attack freedom of information is shameful.

The hysteria of the U.S. and world governments in their attacks on Julian Assange and WikiLeaks reveals serious hypocrisy when one considers the revelations in the leaks themselves. Unfortunately the U.S. government and media have been able to use the Swedish charges as a means of distracting attention from very real, documented crimes committed in Iraq and Afghanistan. It is worth looking at the incidents revealed in these leaks.

One thing that pops out almost immediately is the fact that the U.S. government lied through their teeth in saying that civilian deaths were kept to a minimum, and that they did not record how many civilian deaths had taken place. The documents indicate that between 2004 and 2009 hundreds of violent civilian deaths were recorded in Afghanistan, and more than 66,000 in Iraq, but they were never reported publicly. Undoubtedly, even these numbers represent only a fraction of the civilian deaths that likely took place, but even by the U.S. military’s own recorded numbers, this is nearly three times the number of “enemy” deaths in the same period (23,984).

This should come as no surprise given the leak of the “Collateral Murder” video early this year, also released through WikiLeaks, which showed a group of Iraqi men and what turned out to be two Reuters journalists in Baghdad being purposefully bombarded by U.S. Apache helicopters on July 12, 2007, resulting in all of their deaths. This was followed by additional footage of the killing of a group of unarmed men together with their children carrying away another unarmed, wounded man to safety. Regardless of the intentions of the soldiers involved, these acts clearly constituted a violation of the rules of engagement, given that none of the targeted individuals were acting in a hostile manner whatsoever.

As Glenn Greenwald pointed out at the time, “there’s a serious danger when incidents like this Iraq slaughter are exposed in a piecemeal and unusual fashion: namely, the tendency to talk about it as though it is an aberration. It isn’t. It’s the opposite: it’s par for the course, standard operating procedure, what we do in wars, invasions and occupations” (salon.com 6 Apr 2010).

Greenwald’s position is supported both by the new evidence and by the video itself, in which soldiers in the helicopter received permission to engage before they had reported anything that would indicate the people being bombed posed an immediate threat.

Also, as if the Abu Ghraib prison torture scandal in 2004 wasn’t enough (another case that the military has dishonestly tried to paint as “a few bad apples”), it seems that torture just as bad or perhaps even worse was allowed to continue in Iraq under the watch of the U.S. military, as long as it was Iraqi authorities and security forces carrying it out. A fragmentary order (or “frago” – an order that alters an existing order) made it explicit that cases of “Iraqi on Iraqi abuse” required “no further investigation.” Incidents of torture suggested in the documents include using electrocution, electric drills, and occasionally executing detainees (bbc.co.uk 23 Oct 2010).

The political backlash following these leaks has been profound, with the whole of the political establishment roundly condemning the leak and threatening severe legal retribution against those involved. Some conservatives in the U.S. have gone even further, such as a Fox News commentator who called for WikiLeaks editor-in-chief Julian Assange to be treated as a “prisoner of war.” Former State Department official Christian Whiton said that the whole WikiLeaks staff should be classified as “enemy combatants” and ominously advocated for “non-judicial action” against them. An editorial in theWashington Times said the U.S. government should be “waging war on the WikiLeaks web presence,” and similar statements have appeared on the website of the American Enterprise Institute (AEI) (The Independent 27 Oct 2010).

22-year-old Private First Class Bradley E. Manning – already charged as the prime suspect in the release of the “Collateral Murder” video as well as video of another airstrike and the latest leak of 250,000 diplomatic cables – has also been classified as a “person of interest” with regards to the Afghanistan War Logs. On the existing charges alone he could face up to 52 years in prison if convicted.

While these attacks on the documents’ leakers are underway, the Obama administration has simultaneously tried to explain away the significance of the documents, using the laughably disingenuous argument that the documents only cover the period of time before the surge took place, whereas now the war is going great. They have also received a bit of cover from The Times of London, which summarized that “[o]ver all, the documents do not contradict official accounts of the war.” More recently, Obama has released a joint statement with Mexican President Felipe Calderón that condemned “the deplorable actions by WikiLeaks” regarding new leaks about the war on drugs (New York Times 11 Dec 2010).

The frantic efforts to suppress these leaks and their significance go against all promises of “transparency” from the Obama administration. The truth is, the government relies on secrecy as its key tool with which to prop up support for the war, and that’s why they’re so eager to go after the people leaking these documents.

Fittingly, this is confirmed by U.S. Army and CIA documents previously leaked by WikiLeaks, which deal with the need to destroy WikiLeaks and how to artificially prop up support for the Afghanistan War in France and Germany. These have section headings literally titled things like “Public Apathy Allows Leaders to Ignore Voters.” In another related section, titled “Why Counting on Apathy May Not Be Enough,” the CIA document outlines other key strategies for propping up support for the war like using Afghan women to make public pro-war statements to play on the sympathy of the French people towards Afghan refugees. It also points out the usefulness of Barack Obama as a pretty face for the war, and someone European populations are more likely to trust (Glenn Greenwald, salon.com 27 Mar 2010).

Going after the leakers of these documents has nothing to do with protecting regular people’s security, as many in the political establishment have claimed, but rather has everything to do with “perception management” (to again quote the CIA). For the rest of us, these leakers should be regarded as heroes who are risking their lives to get this crucial information into the hands of the public. These documents can and should be spread far and wide to expose the ruthlessness and futility of the wars, and should be a spur to renew efforts to organize to stop them immediately.