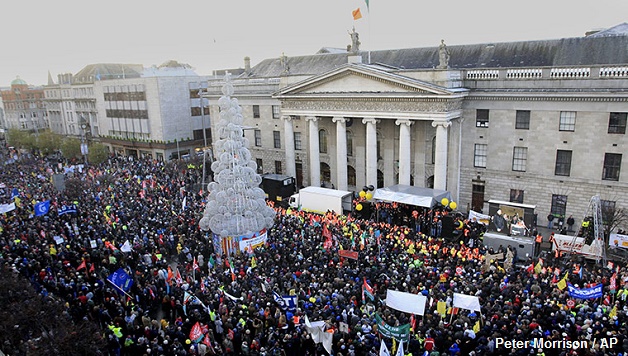 November 27 saw a massive demonstration in Dublin – of over 100,000 people, according to the Irish Congress of Trade Unions – as workers and young people took to the streets in opposition to the continued onslaught on living standards. Below we publish an article from the website of the Socialist Party (CWI in Ireland). More reports/analysis to follow.

Another €15 billion in cuts and tax increases will just make this disaster even worse. ICTU says the “National Recovery Programme” will cause another 90,000 job losses. A deflationary program of nearly €30 billion cuts/tax hikes over six years will guarantee mass unemployment and mass emigration for years to come.

Capitalism has failed – Austerity will fail!

The IMF and the EU are here to help their friends in the current government (and the next) impose a cruel austerity program to bail out not just the Irish banks but also the German banks, the British banks and all of the other billionaire bondholders.

The “markets” have targeted Ireland’s economy, pushing interest rates up higher and higher to levels they knew could not be paid in order to force the country into accepting a bailout. Democracy in Ireland and across the EU is exposed as a sham by these events.

€85 billion more in loans imposed onto the backs of ordinary people just so the billionaire bondholders are guaranteed to get paid. The national debt is set to reach €200 billion. This debt will be an albatross around the neck of generations to come.

The Irish working class are being sacrificed to save the euro and the failed market system and now these vultures are moving on to Portugal.

No future for youth

There is nothing to create a future for young people in this “plan.” A €40 a week cut in the minimum wage, student fees up 33%, no job creation, 25,000 less jobs in the public sector. Even if you do get a job in the public service the starting pay is now 25% less than two years ago – €21,000 a year for a clerical officer – a poverty wage!

A collective sigh of relief was heard from the super-rich. While the poorest in society and the low paid are savagely attacked they got off scot-free. The multinationals and their billion euro profits will not be touched as corporation tax remains at 12.5%. Yet the lowest paid are too pay more tax AND have their pay cut by a whopping 11.5%. There is no justice in this society!

Who can defeat the markets?

Not Labour. The Labour Party have said they will not reverse the €6 billion cuts and new taxes due in the Budget. Labour and Fine Gael have told the IMF/EU-crats that they are committed to implementing austerity to meet the 3% GDP/debt ratio target by 2014.

However the “markets” and their henchmen in the IMF/EU, willingly assisted by Fianna Fail and the soon to be government of Labour and Fine Gael can be defeated.

People power – For a one day general strike

The people of this country have the collective ability to stand up to and stop the austerity attacks. The trade unions are potentially the most powerful social force in this society. Today’s demonstration is just a glimpse of what can be achieved. But one demonstration is not enough. The most powerful weapon the working class have is the ability to withdraw their labor – to strike.

This is an unprecedented crisis and the people need to take radical action to protect their living standards, their public services and their children’s future

The ICTU should name the date for a one day general strike as the first step in a determined campaign of national strikes and mass demonstrations with the goal of bringing down the government and stopping the four year austerity plan.

A mass movement of working class people could get rid of this lame duck government and send a powerful message to Labour and Fine Gael that another version of the same austerity plan will not be tolerated.

Yes there is another better way to end the economic crisis. A way that can actually work. Run the economy so the needs of the working class and middle class people first and so the vast wealth in this society is used for the benefit of the majority, replacing the failed market system. That better way is called socialism. Read our 10 point socialist program on the Socialist Party.

Join the fight back – Join the Socialist Party

Get in contact with us today to find out more about the socialist alternative to the failed capitalist system and how you can join in the fight back.
The Socialist Party calls for:

“The government’s four year plan is an open declaration of war on working people, the unemployed and youth they are being asked to pay for this crisis.

“Through regressive tax increases like the home tax, water charges and VAT hikes, cuts in pay, the minimum wage, pensions as well as slashing public sector employment the life will be kicked out of the economy.

“Today’s national protest must be the opening salvo of a sustained fight back. The day for a one day general strike must be named and further escalations thereafter until this government are forced out of office and the IMF/EU backed austerity program is defeated.”