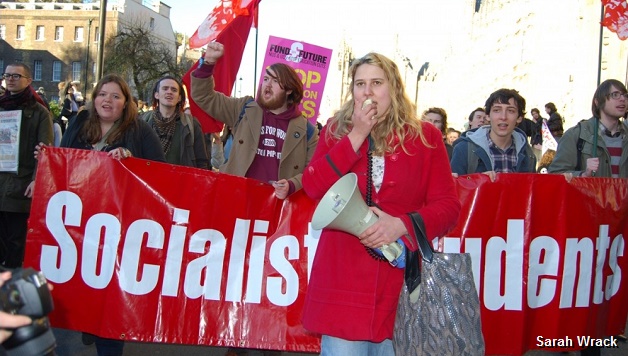 The anger of students and young people against the proposed cuts to education and vicious tuition fee rises was impossible to ignore on the demo on 10 November 2010.

Not only did students turn out in numbers not seen in 30 years, they were clear that this had to be the start of a campaign to stop cuts.

Coaches arrived from the farthest reaches of Scotland, where fees have not yet been introduced, and from all across Britain.

Liverpool, Newcastle, Birmingham and Cockney accents could all be heard shouting their opposition to the cuts.

Among the 52,000 students who marched there were major university delegations with matching t-shirts, official placards and flags.

But there were also groups of college and sixth form students who had organised themselves to get along – some had rung in sick to college, some had simply not attended and at least one group had come on a ’school trip’ which the college organised when it was clear that students would be going with or without their teachers’ sanction.

One group of students from an east London college made their approach to the demo known, marching en bloc shouting “Tory scum, here we come!” Homemade banners opposed the cuts and declared affection for the soon to be extinguished Educational Maintenance Allowance (EMA) for 16-19 year olds.

But they also apportioned blame for the cuts – often in quite colourful language.

The Tories are clearly seen as the enemy for many of those on the demo and, while the threat of a return to Thatcherism may not have meant a lot to students before the election, it clearly does now.

One placard recalled slogans of the 1980s: “David Thatcher – education snatcher”. Slogans like “Dave says relax (if you’re rich)” and “Classrooms not class war” shows that the Con-Dems’ insistence that ’we’re all in it together’ is not accepted.

But Nick Clegg and the Liberal Democrats, who promised to vote and campaign against any rise in student tuition fees came in for particular attack.

Written and painted on cardboard were slogans like: “Nick says ’I agree with Dave’”; “Mr Clegg – you stole my vote”, “Lib Dem liars – Clegg+Cable=sell outs” and so on.

Only six months after the election, this was described by the Guardian as “the largest and most dramatic response to the government’s austerity measures”.

All but the super-rich will be affected by the brutal measures in the comprehensive spending review and the emergency budget.

But the education cuts are among the most brutal and cruel. Not only will fees be raised from the current £3,290 to an eye-watering £9,000 but 80% of spending on teaching will be gouged out.

The cutting of the up to £30 a week students receive in EMA payments is especially brutal. Students were clear that this is the road to ’less for more’ and a two-tier education system. The previous New Labour government commissioned Lord Browne, the former BP chief executive to review higher education funding.

His vicious proposals are acceptable to the millionaire Con-Dem government, but to few besides. Even a commentator in the pro-Tory London Evening Standard was forced to condemn the cut-throat approach to education expressed in Browne’s Review.

Richard Godwin writes that: “Politicians seem to find it hard to conceive of education as worthwhile in its own right.

According to Browne’s report, it matters principally ’because it drives innovation and economic transformation.

Given this onslaught and the widespread anger against the austerity cuts socialists and campaigners were not surprised at the massive turnout. There was a wide variety of opinions on how education should be funded. However students were open to discuss. One young woman picked up a Socialist Students placard saying: “I want this one – we’ve got to fight the cuts!” but then added: “But I don’t see how we could pay for education”.

When she was told how around £120 billion is lost in unpaid, uncollected and avoided taxes by the rich each year she was happy to carry the slogan high.

Most students were also determined that, having felt their strength of numbers, there must be a next step to the campaign.

Socialist Students distributed around 10,000 leaflets calling for strikes, walkouts and protests on a day of action on Wednesday 24 November, when the government next discusses fees.

Socialist Students has a fantastic record of opposing fees and campaigning to defend education in the schools and colleges.

Unfortunately a strategy for the campaign was not supplied by the National Union of Students (NUS). Although they co-organised the march with the UCU lecturers’ union, full in the knowledge that dozens of coaches were coming from cities and towns across the country, the pro-Labour leadership of the NUS seemed unprepared for the mass response.

The NUS website expected the march to be done and dusted in 30 minutes, not realising that tens of thousands of people do not breeze through the streets like a Saturday shopper.

This also meant that stewarding of the protest was inadequate – particularly at the end. Having not lifted a finger to fight the introduction of and increases to fees under Labour governments they appear to have little experience of organising and participating in major demonstrations.

Furthermore the democratic structures of the NUS have been massively eroded leaving little connection between the leadership and ordinary students.

Outrageously NUS president Aaron Porter, who could not even bring himself to commit to opposing fees in principle on Newsnight recently, has attacked the protesters at Millbank Tower as “despicable”.

He calls on students to “move forward” but so far the NUS strategy is limited to a call on students to follow up the collective action of marching in their tens of thousands with returning to sit in front of their computers and email their MP and visit them ’in person’ – not just virtual protest but almost!

Given the major attacks, the failure of the NUS leadership to provide a strategy for what to do next to build the campaign, and the almost total absence of stewarding of the end of the demo it was not surprising that some found the idea of occupying the Tories’ HQ appealing.

The Socialist Party sees occupation as a legitimate and important part of building a movement against cuts, alongside other tactics.

To be fully effective occupations must be based on democratic decisions and control of tactics, organised and stewarded with a clear set of demands.

This would prevent actions like that of the one person who mistakenly and potentially dangerously threw a fire extinguisher from the roof.

Such individual actions would be prevented by the will of the majority as expressed by the hundreds of students who shouted “stop throwing stuff’ at those on the roof. However this was not an organised occupation but a spontaneous protest. From China, where he is on a state visit, David Cameron said: “People who assault police officers or who smash windows or who break property are breaking the law and yes, those people I hope… will be prosecuted. They should be.”

The media has chosen to focus on the occupation rather than the mass action of thousands. Students commented that the bias of the capitalist media meant that it was only the occupation that got them the publicity that the issue deserved.

After all 125,000 Tamil people marched against genocidal slaughter in Sri Lanka in 2009 and received only an inch of newspaper column space.

Millions of workers and young people who face the Tory axe will feel that while some the students went ’a bit far’, a few windows are small beer compared to the hundreds of thousands of lives that will be smashed by the Con-Dems’ austerity measures, if they get through.

The Socialist Party agrees with the lecturers at Goldsmiths University who issued a statement saying: “The real violence in this situation relates not to a smashed window but to the destructive impact of the cuts and privatisation that will follow if tuition fees are increased and massive reductions in higher education funding are implemented.”

London Tory mayor Boris Johnson, who has backed up fire brigade management when they threatened mass sacking of the capital’s firefighters, was quoted in the Evening Standard hypocritically condemning “thuggery and violence” and has been backing up calls for a stepping up of the policing of protests.

In the run up to the May general election George Osborne predicted that within six months of being elected this government would be “deeply unpopular”.

This demonstration leaves no doubt that his prediction has been borne out. And, as the Socialist Party itself predicted, the anger is going to find an expression on the streets. The students’ demo has been described by the Independent as marking the “end of the Coalition’s era of consensus”.

The students have given a lead and made the mass opposition and anger that exists manifest.

The next step that is required in building a mass, sustained and determined movement that can stop the Con-Dem onslaught is for them to be joined by the powerful organisations of the working class.

A glimpse of the power of the working class was shown by a recent strike by tube workers in the RMT and TSSA unions which brought the City of London to a standstill.

The students need to continue to develop their own democratic and mass movement but also to link up with the trade union movement and the working class to build a movement powerful enough to stop the Con-Dem cuts.

The NUS should set a date in the next couple of months for the next demo if there is no change in government policy.

Build support for the Socialist Students and Youth Fight for Jobs day of action on 24 November as the next critical date in the campaign – strike, walk out, protest! Seewww.socialiststudents.org.uk and www.youthfightforjobs.org for more info, to get leaflets, posters, and other material or to request a speaker.

No attack on the right to protest! There must be no victimisation of students involved in the demonstration.

Protest at Boris Johnson’s GLA office if there is any.

The trade union leaders must coordinate action between the unions, linking up with the student organisations and the local anti cuts unions to call a national trade union-led demonstration as soon as possible as a step towards a 24-hour public sector general strike.