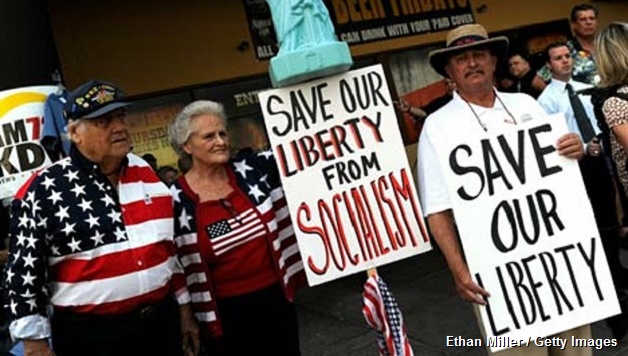 The Tea Party made gains in this election, putting many of their figureheads into the halls of Congress. This raises the questions: ”What does the Tea Party represent?” and “How can we defeat the Tea Party agenda?”

A recent Tea Party-sponsored political television ad starts by attacking Obama for wasteful government spending by pointing to the stimulus program. It then moves on to Obama’s efforts to cut Medicare benefits. The conclusion: Obama wants big government and cuts to Medicare.

To the average person who is aware that Medicare is a government program, this type of nonsense can be quite frustrating. But this is part and parcel of the bundle of contradictions called the Tea Party phenomenon.

During the Republican primaries, the Tea Party movement was a self-proclaimed insurgent grassroots revolt against the mainstream leadership of the GOP. Their anti-establishment rhetoric tapped into conservative anger and has drawn support by railing against entrenched Washington insiders. Some of these politicians have unabashedly put forward ultra-conservative, extremist, as well as racist and anti-immigrant views.

In Kentucky, Tea Partier Rand Paul, the son of prominent libertarian Republican Congressman Ron Paul, stated that he believed the Civil Rights Act of 1964 was an “overreach” of government power. Fox News’ Glen Beck, an outspoken promoter of the Tea Party, organized the August 28 “Restoring Honor” Rally in D.C., called on the same day Dr. Martin Luther King, Jr. gave his famous “I Have A Dream” speech 47 years ago.

Many ordinary working people see the rise of the Tea Party movement as a threat. But to combat the Tea Party and the right we have to understand what it’s really about. It’s not enough to dismiss them as “lunatics,” as some on the left want to do. Do the successes of the Tea Party really mean that there is a massive shift to the right in the U.S.? This is not supported by the evidence.

Based on an early October poll, the Washington Post concluded: “Although Republicans, and many Democrats, have tried to demonize Washington…most major government programs remain enormously popular.” The poll shows majorities wanting the government to be involved in schools and helping reduce poverty. In fact, it found that support for government on a broad number of issues remains “high, in some cases where it was a decade ago” (10 Oct 2010).

A small section of the population, especially among older white males, has moved to the right. But the majority wants nothing to do with the right-wing Tea Party. In fact, a recent Gallup poll cited that around 30% of people in the U.S. viewed “socialism” (which to most people means more government services and programs) as more favorable than capitalism. Among youth aged 18-30 that figure goes up to 43%!

In the fall of 2008 the unprecedented $787 billion bank bailouts sparked an explosion of anger amongst wide sections of the population, left and right. A month after Obama was in office, Rick Santelli of CNBC called for “tea parties” to protest Obama’s spending program.

But this wasn’t to oppose the hundreds of billions going to Wall Street and the big banks whose reckless behavior played the decisive role in the worst economic crisis since the 1930s. The real target was a $75 billion program to prevent home foreclosures. In this fashion, genuine rage that existed against Wall Street and the big banks was captured by the corporate media and redirected at sections of working-class and middle-class America.

Most of the Tea Party events have been sponsored by “FreedomWorks,” chaired by Dick Armey, the former House Majority Leader for the Republican Party, and Fox News. Another organization behind the scenes of the Tea Party is “Americans for Prosperity,” which is funded by right-wing billionaire David Koch of Koch Industries which among other things, deals in trading and financial services.

The big business interest in all this has been primarily to block any kind of reform by the Obama administration, most importantly health care and financial regulation. They’ve exploited populist anger, turning it into a battering ram aimed against the interests of working-class and middle-class people who have suffered the most from this crisis.

It wouldn’t be the first time that the Republicans and a wing of corporate America turned part of its voting base so directly against their own interests. As Matt Taibbi of Rolling Stone Magazine described in an article titled “Tea & Crackers,” this contradiction was on clear display in “a hall full of elderly white people in Medicare-paid scooters, railing against government spending and imagining themselves revolutionaries as they cheer on the vice-presidential puppet [Sarah Palin] hand-picked by the GOP establishment.”

But the bigger picture is that the Tea Party movement helps promote the big business agenda of diverting anger at the crisis from Wall Street and corporate power by blaming working people.

Tea Party candidates are parading as if they’re a real voice of opposition. In reality they’re total fakes. Carl Paladino of upstate New York ran an insurgent campaign defeating the mainstream GOP choice in the primary for governor. An example of Paladino’s rhetoric was to “bring a baseball bat” to the rampant corruption in Albany and a “people’s revolution” against the “ruling class.” A “people’s revolution” against the ruling class?! Only slightly overlooked in this statement was that Carl Paladino (who lost badly to Democrat Andrew Cuomo in the general election) is a multi-millionaire real-estate mogul from Buffalo who made his millions partly from government deals.

The fundamental problem is that Democratic pro-corporate policies are as responsible for creating this crisis as Republican pro-corporate policies. Although the Democrats don’t come out with the same right-wing garbage that spews from the mouths of some of these Tea Party politicians, they have shown no capacity to actually challenge this right-wing agenda in any real way, or to actually solve the economic problems like mass unemployment and cuts in services.

The popular anger which provides the social base for this right-wing corporate-backed obstruction campaign is fueled by the deep economic and social crisis. For nearly two years now the Democrats have been in power in the White House, have had a majority in the House and a filibuster-proof majority in the Senate, and they have done virtually nothing to reverse the crisis.

The main reason the Democrats have not been able to take on the right is because they don’t have anything fundamentally different to offer. They cannot expose the corporate backing of the Tea Party because they receive the same corporate dollars. They cannot attack the right for wanting to cut the deficit by slashing social programs because that’s precisely what the Democrats are already doing! On the state level Democratic and Republican administrations alike have been slashing billions from state spending while the new bipartisan budget commission set up by Obama has its sights set on cutting Social Security after the midterm elections.

Through Fox News and other corporate backers the Tea Party has been given massive publicity. While it is a very diverse force, its message of blaming immigrants for the economic crisis and its barely veiled racism are a warning to working people and young people of the real threat of the right wing.

The only way to effectively counter the Tea Party movement is to directly expose their lies and half-truths and their real backers. We need to confront their policies and organize counter-rallies, whenever possible. We also need to mobilize campaigns to run independent left candidates to put forward an independent working-class political voice. We need to put blame where it should lie, on Wall Street, big business and the failing system of capitalism.