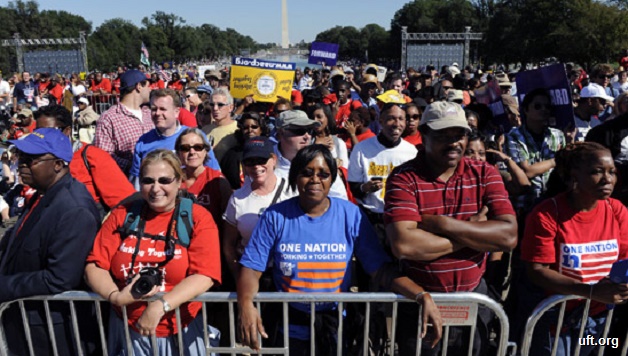 If you lived in a bubble and just read the mainstream media, you might think the only obstacles to solving our economic woes are the “special interest” unions that are resistant to accepting cutbacks.

The truth is that it’s the corruption and greed of Wall Street, the corporate politicians and the blind system of capitalism that is the cause of this economic crisis. The ruling establishment is leading an unprecedented assault on the living standards of all working people, and they’re trying to convince us — with the help of their friends in the corporate media — to blame each other instead of them.

The ruling elite know if they are able push back the union workers, who at least have an organization that can stand up to the attacks, it’s open season on the whole working class. With chronic unemployment, massive cutbacks to social services, a new round of foreclosures on the horizon, and the possibly of another recession, working people need unions now more than ever. And workers in unions need to actively work to transform them into membership-run fighting organizations.

On October 2, upwards of 200,000 gathered in Washington, D.C. It was called the One Nation Rally, mostly organized by the unions, with demands for jobs and education and implicitly responding to the right-wing fervor whipped up by the Tea Party and Glen Beck and Co. at Fox News. It was an historic event, given that the unions haven’t mobilized on the Capitol on this scale since 1981 during the PATCO strike, when Reagan fired 12,000 air-traffic controllers.

The overwhelming message from the top union officials speaking at the podium on October 2 was that to get what we need, we must vote Democrat. The fact that union officials decided to mobilize on this scale for the first time in decades shows the enormous difficulty they face in convincing their members to continue to support Democrats. It reveals the deep disappointment amongst working people in the so-called “friends of labor.”

The union leadership has accepted the logic of the system, now in a deep structural crisis, which to them means working people have no choice but to make huge concessions. Unable to completely ignore the fact that the Democrats are also wielding the axe and cutting away at our jobs, wages, benefits, education and health care, they argue if we vote Democrat at least we’re at the table and can negotiate what we have to give up. But concessions only lead to more concessions. The labor leadership is so tied to the Democratic Party that when the attacks come down, they say we can’t mobilize and fight back because that might upset our carefully worked-out (abusive) relationship with the Democrats.

This reliance on a corporate-dominated party has left the movement bound and gagged, preventing the unions from speaking out against the bank bailouts, fighting for single-payer health care, mobilizing against the war, waging a serious battle against the budget cuts, or pressuring the Democrats to even make good on their own promise of expanding union rights through EFCA.

This past spring, union nurses and hospital workers at Temple University Hospital in Philadelphia waged a four-week strike over their contract. It wasn’t just their wages and benefits that they were defending, but also the right for nurses to freely speak out against unsafe conditions for patients, which management wanted to prevent with a “gag” clause in their contract. In this case, the union won because of their constant mobilization and rallies and the broader community support they had developed by standing up and fighting for all working people, not just their membership.

There is tremendous anger and discontent in U.S. society that could be harnessed by following the example of the Temple nurses and waging a bigger battle to fight for jobs and services. It’s time to capture that anger and take on who’s really to blame: the bankers, giant corporations, and their political servants in both major parties. And the unions, with millions of dollars and millions of members, are in the best position to lead that fight and unite workers and youth in common struggle. But by trying to convince workers that the Democrats are their friends and papering over their corporate agenda, the top union leadership is actively muffling this very real anger, missing a tremendous opportunity to lead a broader working-class fight-back.

October 2 clearly showed that the unions are capable of putting hundreds of thousands on the streets. Mass protests are needed. But one-off events just to blow off steam are not enough. Many working people in D.C. expressed clear frustration at the fact that the right-wing agenda gets so much attention, while the progressive working-class agenda of the unions isn’t getting anywhere.

This frustration is understandable, but the ruling establishment won’t ever listen to us unless we make them. That means when we must go out to protest, we make it very clear that we’re not just going to hand them our vote and then beg for attention. If our message isn’t heard and our demands are not met, we won’t just go home and give up, we’ll keep fighting, we’ll build ongoing campaigns involving wider and wider layers of the working class. This would also attract new workers to join the union movement.

One of the most encouraging parts of October 2 was that not all workers who attended simply bought the line of the speakers at the podium. Many expressed deep frustration at the Democrats and were very open to the idea that working people need our own political party. And that’s a good start in rebuilding an independent labor movement with a bold strategy to organize a massive united fightback.

Over 25 members and supporters of Socialist Alternative traveled to D.C. to support the unions and the demands for jobs and education, but not the call to vote Democrat. We felt that there would be openness to discussing a break from both corporate parties, and we were right! Socialist Alternative produced a new pamphlet called “Challenging the Two-Party System: Can a Left Alternative be Built?” and we sold 170 copies. We also sold over 400 copies of our newspaper Justice, and raised just shy of $1,000 total from sales of literature and buttons.

The highlight of our efforts was the 12-foot banner that read “Wall St. Has Two Parties, We Need One of Our Own.” The huge banner also read “Fund Jobs and Education Not War and Wall Street,” linking the fight for basic needs with independent politics. The banner attracted a lot of attention. People took pictures, commented and approached our table to discuss with us and purchase our literature.